Preparation begins in earnest for this year's attempt at the 1200 kilometer distance.  Max is likely to be joined by Damon, a former professional colleague and recent frequent partner-in-crime on events including marathons, triathlons, and longer rides.

We will ride the Alaska Randonneurs Big Wild Ride, from Valdez through Glenallen, Delta Junction, Fairbanks, Nenana, Healy, McKinley Park, Talkeetna, and Wasilla, finishing in Anchorage.  We will launch on July 21 at 6 pm.  A goal that sounds modest but in reality may be aggressive is finishing by July 24 at the same time, for a 72-hour tour of most of the paved roads in Alaska.

I will be riding the Gunnar as rebuilt for the 2013 season -- full Ultegra groupset, well-worn Concor Light saddle, flat-top bars, custom 28-spoke wheels from Neuvation, and stubby aero-bars.  The fork is new this year, a base-model Richey carbon jobbie saving me about a pound of weight versus the original steel.  I expect to stay with 50-34 and 12-25 gearing.  As I write I am planning on running 28c Grand Bois tires with latex tubes, but that is tentative.  One question is whether I can mount fenders -- a big plus in a state in which summer rain is all too frequent.

Lots of experimentation to be done with regard to loading -- camelbak? 4 water bottles?  Frame bag?  How large of a seat bag?  And the same with lights.  If they work well in trials, my two new Dinotte head-lights and the mainstay PBW tail-lights are promising choices.

And the biggest preparation goal is to gain experience with two things.  First is night riding:  with the 6 pm start, night riding is essential on the BWR.  In fact, a highly plausible schedule would have one riding three nights in a row: 6 pm to ~2 pm to reach Delta Junction; 6 pm to ~2 pm to reach Healy; and 6 pm to whenever to return to Anchorage.  Second is multi-day riding.  I've had success finishing 400K and riding a 200K the next day on two 600s in Alaska (the picture is from one of them, and also happens to be a stretch of road the BWR encounters), 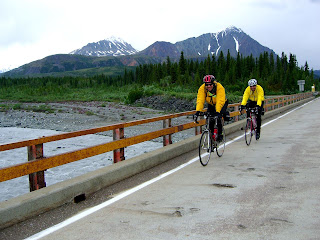 The solution to both is easy to state -- practice.  In reality it's pretty hard to implement.  Who wants to give over an entire weekend to the kind of discomfort that only ultra-cycling can cause?

I'm cautiously hopeful for this year.  Thinking far, far ahead, this is one step in a mid-range goal of gaining entry into the Furnace Creek 508, perhaps targeting fall 2015.
Posted by Max

I wonder about the necessity of fenders on a long ride. For occasional sprinkles, they are probably nice. But if weather hits in earnest, you're soaked regardless.

You'll recall the rainy 600K, once we got wet, I don't feel that we suffered from the rain, given that we had appropriate clothes.

Also, I continue to think that given a couple long rides leading up to BWR, the wisest course is to ride through to Fairbanks before sleeping. 600K would be a long day, but far preferable to riding every night, and waking up to 600K remaining is a lot less daunting than waking up to 800K remaining.

Also, given our rapid dehydration on the last 600K, the Camelbak seems like a good option. Of course that assumes you've tried it out prior. If it causes problems you can always dump it at a control, or in a trash can.

I completely agree regarding the schedule. That is not even inconsistent with the ride-to-Delta-by-2 pm plan; one could stop, relax, even sleep for a couple of hours, and shoot for Fairbanks by midnight or 1 am.

Then a shower, a real bed, and a 8 am start with 2x300K to go during the daylight hours -- sounds almost pleasant!

But I'll believe it when I see it. It would be a lot easier if you were there to help to drive the train.

I will probably alternate setups between the 400 and the 600 this year. One time try the behind-the-seat bottles, the other try the Camelbak. I like the idea of leaving the weight on the bike and off of my back, but experience will tell.