On day 2 last March we rode 62 miles (or so) from Carson City into the hills, through or around historic mining towns, through phenomenal mountain suburbs of Reno, down a long descent, and back along Highway 395.

First we wound through the north part of Carson City on Arrowhead Drive in order to meet Highway 50 a few miles east of town.  Carson City is pretty gosh-awful for the most part, but bravo with regard to the ability to get out of town quickly and easily.  The eastern Sierras loom on the horizon to the southwest (behind Sam in this picture).  The mountains are probably part of the massif surrounding Lake Tahoe. 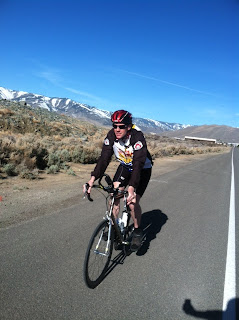 After leaving Carson City we had about 10 miles to ride along Highway 50.  It had a nice wide shoulder, so we rode without discomfort.  One is halfway tempted to miss the turn-off to Highway 341 and head east to Ocean City, Maryland.

This next photo comes not long after we joined 341.  The climbing starts in earnest just after passing a chocolate factory.  Air temp is still below 40, but as you can see it does not take long to start feeling warm! 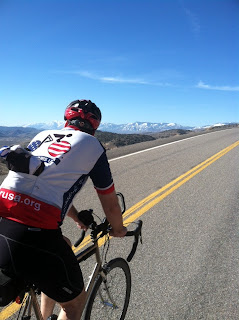 After climbing a while we encountered some wild horses.  They are apparently quite used to being encountered and were happy to stand still to have their pictures taken.  This picture comes somewhere between Silver City and Virginia City.  For the sake of future route planning, we followed Highway 341, also called Occidental Grade Road, around Silver City.  The main highway becomes 342. Our route added a few or several miles, but avoided a stretch of 15% grade on the direct route.  Next time, bring lighter bikes and take it head on. Then we reached Virginia City.  First we crossed the tracks for the Virginia - Truckee Railway.  A sign indicated the railroad is the infrastructure that spelled the end of Silver City, though exactly what about the railroad made a city obsolete is not clear.  Perhaps Silver City was a transit hub of sorts.  Truckee needs no introduction, of course; it is the jump-off to Tahoe area skiing.  We did not make it there on this trip. 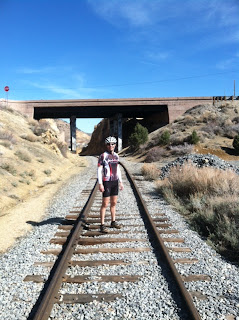 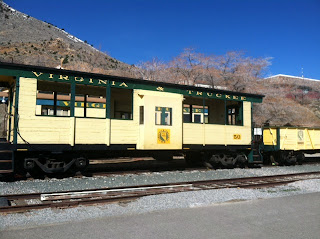 After crossing the railroad we entered Virginia City.  It is a highly touristed, well preserved ghost town that is frankly pretty cool.  The below pictures include the opera house, the school, and the mansion in which the mine owner lived.  I can't recall the fourth building, but it looked pretty neat from below.

Highway 341 continued up and over the pass, turning into Geiger Grade Road on the other side.  We split off again onto Lousetown Road and then left onto Cartwright before returning to Geiger Grade.  Riding Lousetown Road was a marvelous meander through a dry alpine valley.  Not far into that valley we rode by this place.  Had it a "For Sale" sign, I would have signed papers on the spot. 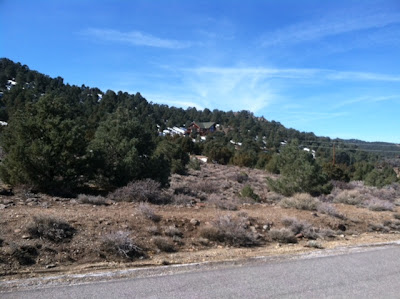 I think we were both surprised at the challenge of climbing Cartwright Road back to Geiger Grade.  My GPS recorded a long stretch in the 8% range, which would be fine if we hadn't gone from "riding" mode to "isn't this pleasant" mode somewhere around Virginia City.  After hitting Geiger Grade we returned to the valley floor and Highway 395 in the course of perhaps 10 miles -- what seemed like non-stop 5% descending for 20-30 minutes.  But for a few rude cars and Sam's carbon wheel wiggling in the wind, it would be hard to complain.

We reached 395 at the point where Mount Rose Highway (431) winds uphill to the pass above Lake Tahoe, Mt. Rose Ski Area, and Incline Lake.  (That climb could be added to, or substituted for part of, the route described here.)  Since we were last here in August 2011, on that trip cycling a little less and looking at properties a little more, Highway 395 south from Reno to Carson City has been replaced.  We rode the old road, now named the Carson-Reno Highway, renumbered 395A/430, and boasting a nice shoulder and gentle traffic, while the trucks and speedsters took the Highway 395 just to our west.  We were plowing into a head-wind, it had been 30 miles or better since our last fuel stop, and this was an early-season ride, so the next ten miles might best be described as a slog -- but we seemed to agree that the road was reasonably pleasant nonetheless.

And we had one more main detour, this one on Eastlake Boulevard around Washoe Lake.  We rode this more than once in August 2011, so we knew we liked it and we knew there was a chance to refuel not far from the main road.  I introduced Sam to the wonders of the Snickers ice cream bar, a three-in-one beauty that we returned to more than once more on this trip.  (The three:  calories, cold, and Snickers.)

At its end Eastlake intersects 395 again, but by that point the quiet Reno-Carson Road has been absorbed into the main highway.  I elected to take one final climb through a ritzy Carson City neighborhood, following Hobart to Meadow Woods to Combs Canyon, back down to Ormsby and following College Parkway back to the hotel.  Sam took the directissimo and had a blistering descent on Highway 395.

We finished with In 'n Out in Minden on the way to Bishop.  (By labeling In 'n Out as the end of the ride you get to write off the calories.)

What a beautiful day and route. There's easily a weeks worth of climbs within 15 miles of Carson City.

And easy to get to, and nobody else is there.