Oregon probably isn't traditional fatbike territory, at least not the Portland area where we have neither snow nor sand. But tradition gives way to necessity when building a stable. After all, Catniss didn't traditionally have exploding arrows, but they sure came in handy once she had them! Likewise, with a fatbike in one's stable, every ride becomes an opportunity to use it.

I picked up the Motobecane Boris during one of BikesDirect's sales, which is to say their everyday price. As is the trend with BikesDirect, they stick a single mid-range component on the bike (in this case the SRAM X9 rear derailleur), and then compare it pricewise to bikes that have the full X9 gruppo (compare to bikes costing $2400!). But once you understand that ruse, and accept it as merely a charming fib rather than maliciously deceptive, the $800 price of the Boris is very reasonable. To my eyes, the components appear nearly identical to the KHS 4 Season 3000 which retails for $1800. The frame, too, is a dead ringer. Perhaps we have a third-shift special? Seriously, these bikes are virtually twins.

My Boris arrived in fine shape. UPS is no match for a bike protected with 4 inch tires. 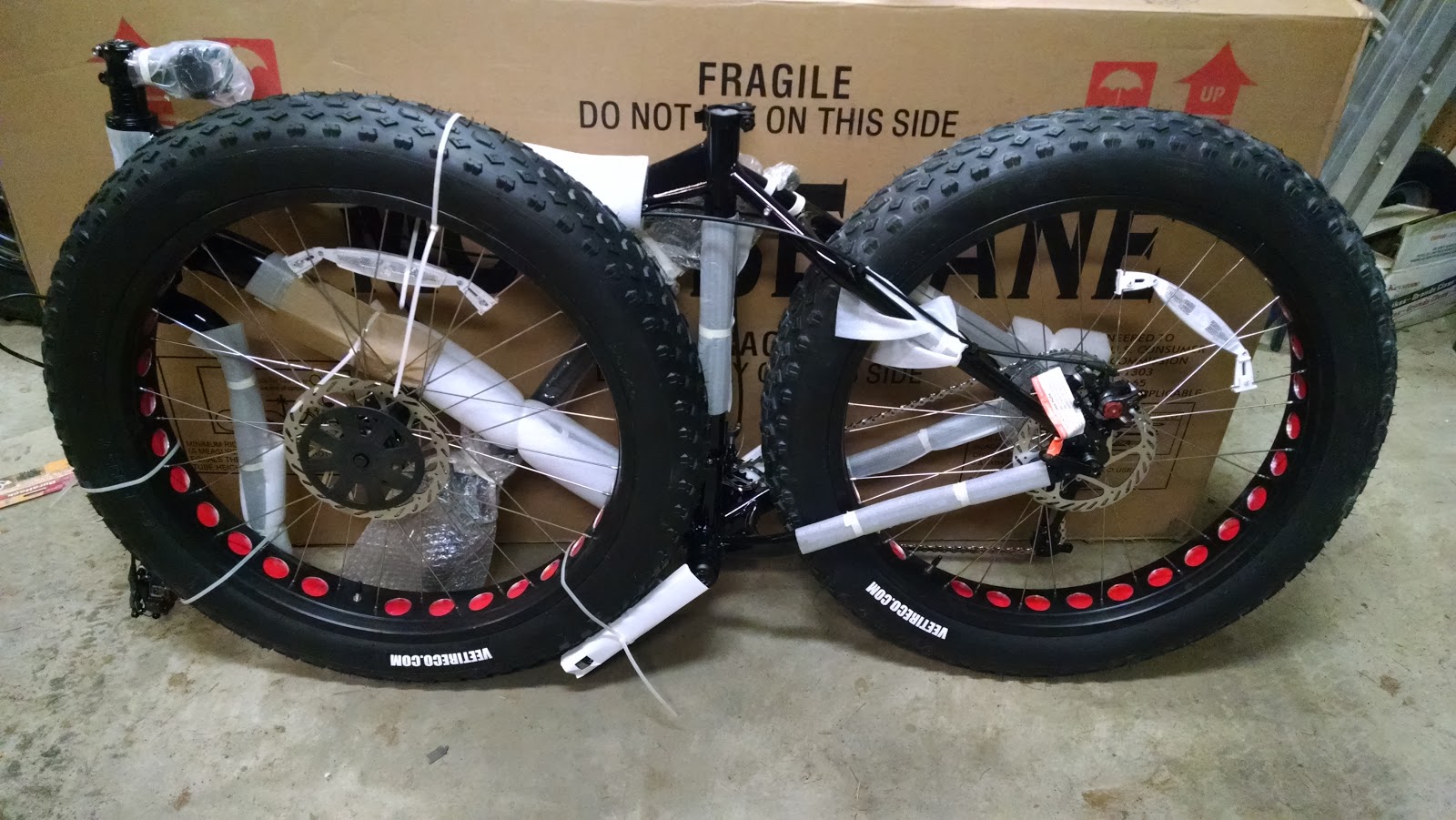 I've put together enough partially assembled bikes that it took only about 10 minutes to have a mostly functional ride. I'll admit to always being frustrated by handlebars. Either the bikesdirect builders employ the world's weirdest cable routing, or they twist the handlebars oddly when attaching them to the tubes for shipping. The end result is this: 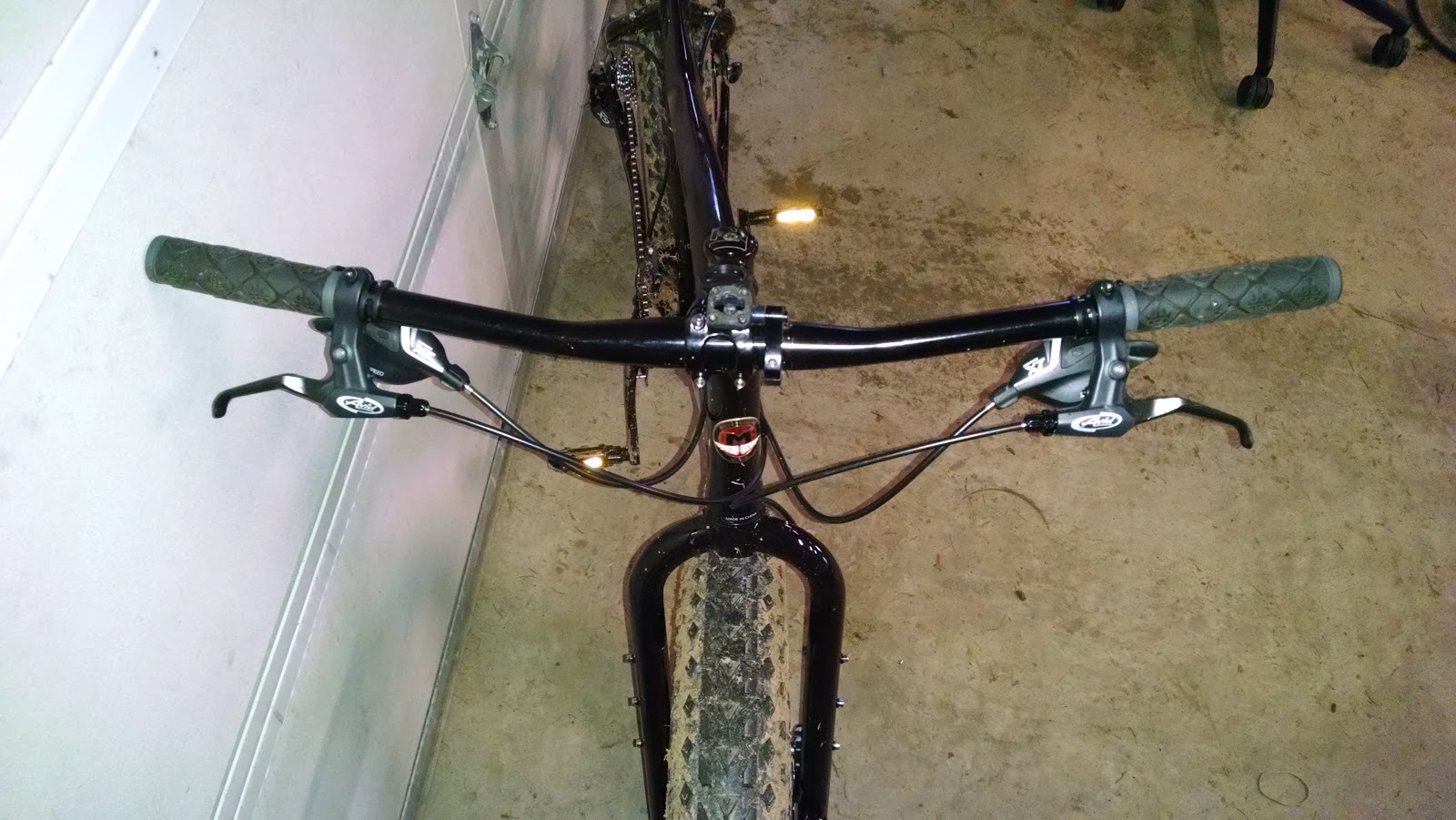 The routing works fine, but is awkward. Cables that should go around the headtube go instead behind it. Weird, but serviceable. I'll re-route when I get some free time. The end result looks like a fat-bike: 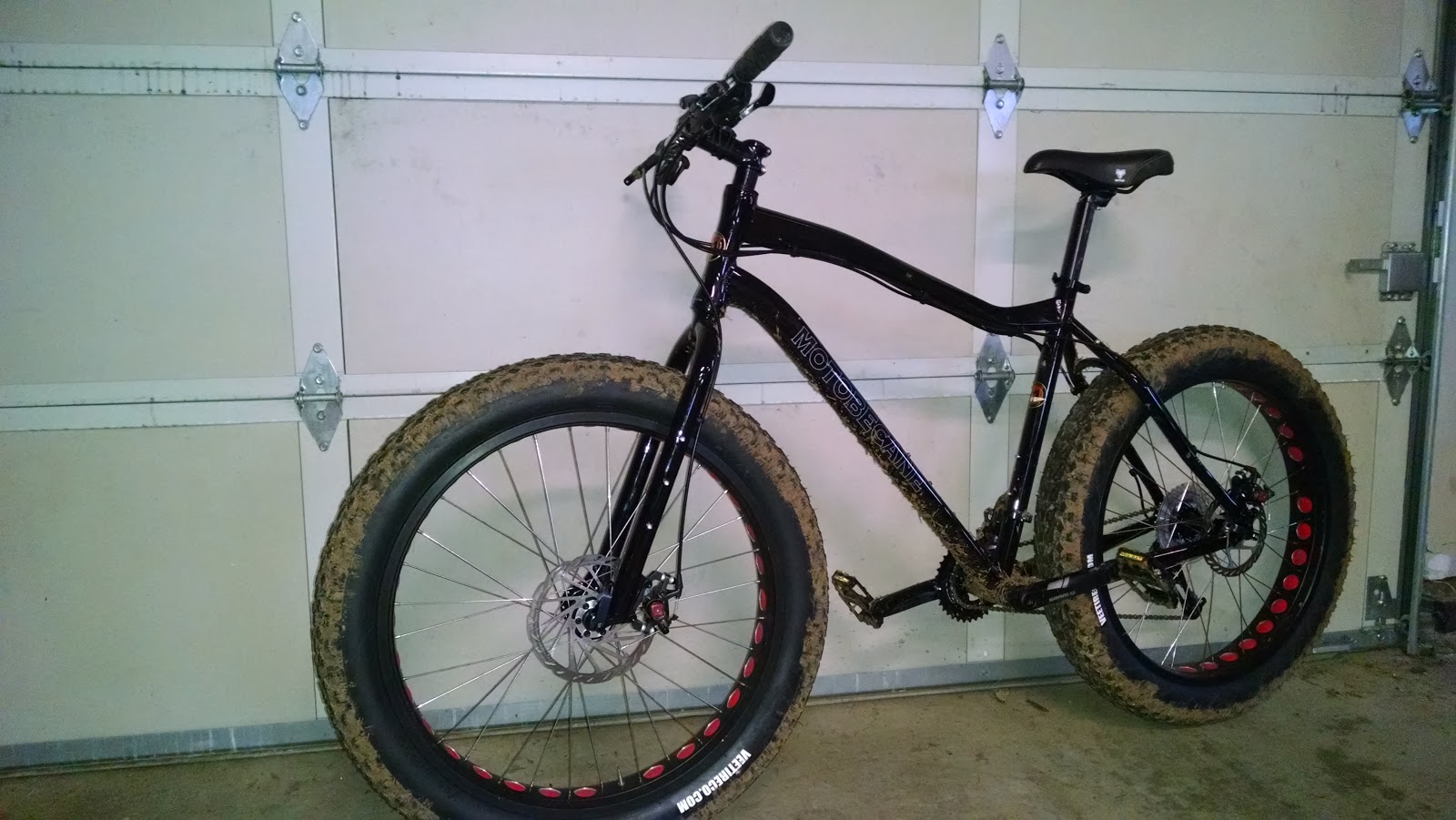 The first thing I noticed.. This thing is heavy. Bikesdirect glosses over this fact:

How much does a fat bike weigh? These bikes are big and Big FUN. Big weighs more. Most average fat bikes weigh between about 30 and 40 pounds. How much do these fat bikes weigh? Compare specs, aluminum fat bikes with similar parts will weigh the about the same. 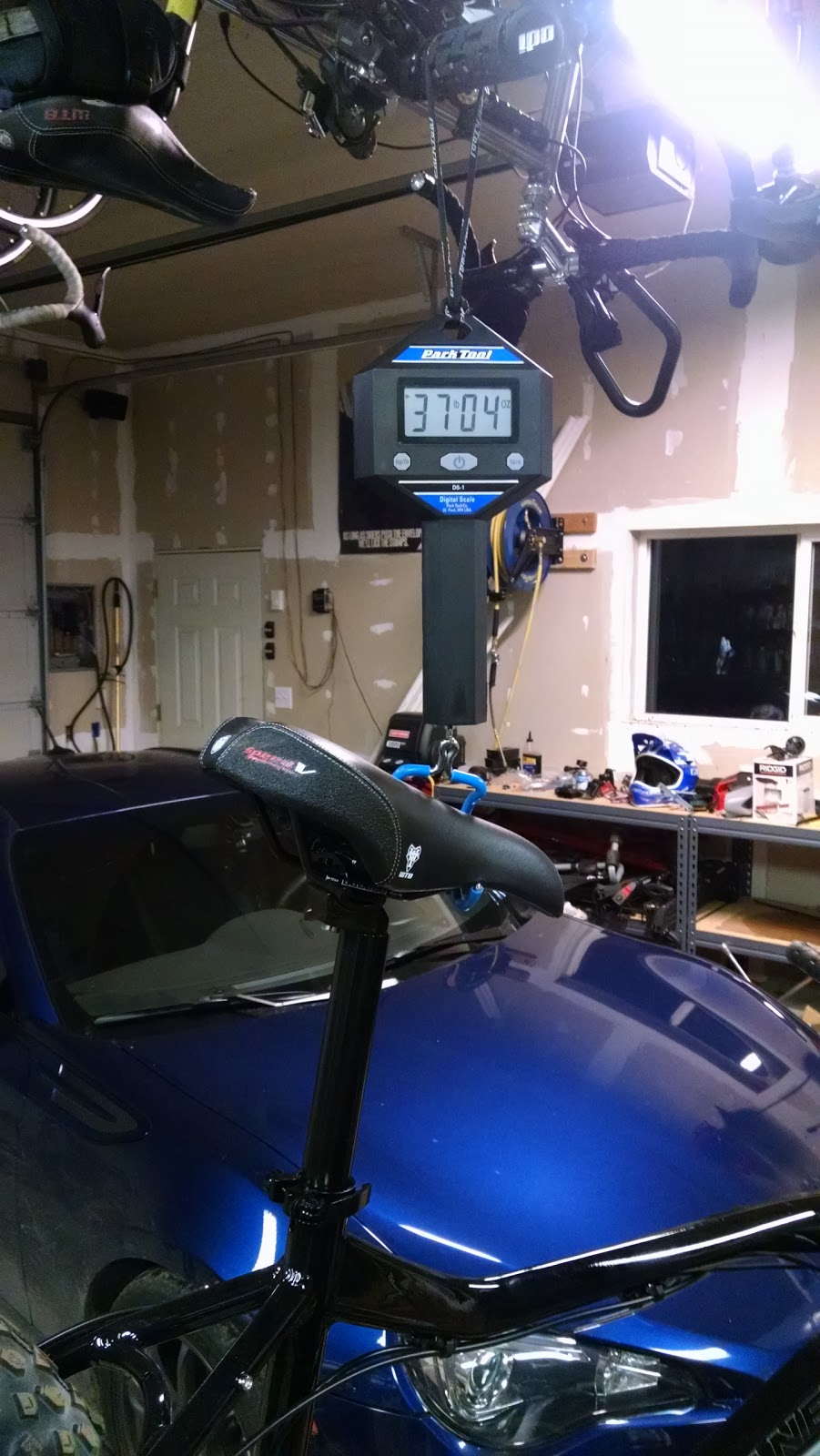 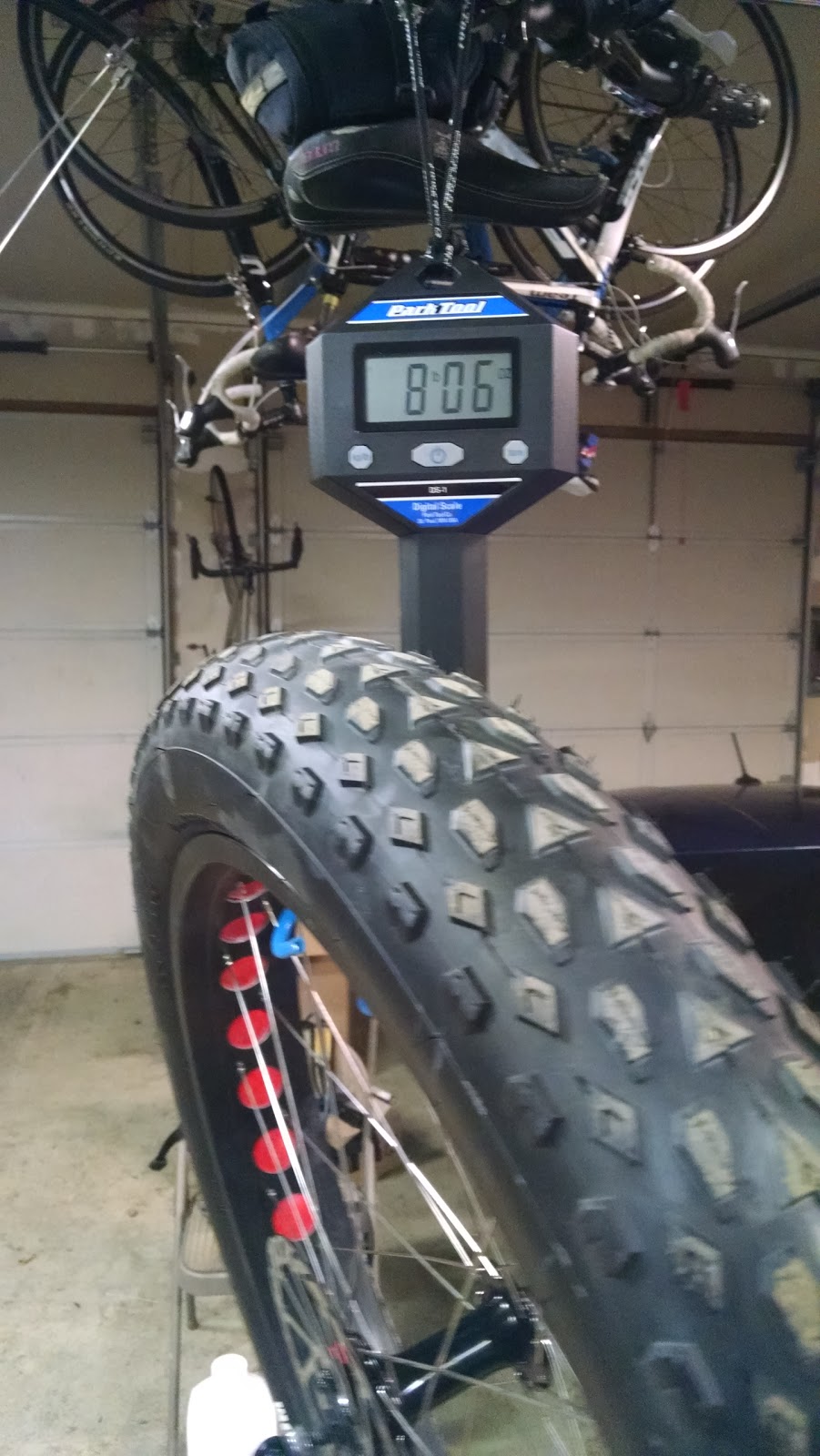 The components are fine, but budget. The Avid BB7 discs are no match for a modern hydraulic brake. Locking the wheels with light pressure from a single finger is not an option, and modulation is coarse at best. The Front Derailleur (Sram X7) and crankset (Sram X5) suit the bike.

If Max' Cannondale is the Mclaren above, then the Boris is my F-350. After breaking my Trek's (brand new) rear derailleur on a log, I took the Boris out for the same 6 mile cross-country loop that I usually ride on the Trek.

At the trailhead I had my first surprise; we tend to steer a bike by instinct.. Just lean and nudge the bars and the bike turns. Turning the Boris, at first at least, is a much more intentional action. Rather than counter-steering, I found myself steering in the direction I wanted to turn. I've never driven a cruise-ship, but I imagine it feels something like the Motobecane Boris. Over the course of my ride I got used to the bike's handling and steering became more natural.

Climbing was also an interesting experience. At 37 pounds the Boris outweighs my Trek by... a lot. 10 pounds maybe? On the other hand, without the rear suspension you lose a lot less energy to useless up-and-down movement. Again the first few hundred yards took getting used to, as with the low tire pressure (about 7 psi) the bike bobbed in time with my pedaling. But again I quickly learned to work around that, and climbing on the Boris seemed about as quick as my Trek. With the tires at urban riding pressures (20psi or so) it would probably climb better than a full suspension rig.

Descending highlighted the Boris' biggest component shortcoming (though admittedly not for the target market). While the quick release seat is handy, it is no match for the dropper seatpost that I've become spoiled by. In rolling terrain with the seat high enough for comfortable pedaling, descending was a treacherous experience, with every feature threatening to chuck me over the bars. When I did finally stop to drop the seat, descending was actually a blast. With a bit more practice, I suspect it will be every bit as fast downhill as is my Trek (at least under my inexperienced guidance). I'm not sure if I'll put on a dropper post, but if I do the 31.6mm seat-tube should allow a generous 6-inch drop.

The real pleasure was climbing on low-traction terrain. A couple notable climbs where I tend to slip out on my Trek, even with mud-tires, were easily conquered with the Boris' 4-inch low-pressure tires. I haven't tried snow yet, but with the right tires it should be a great snow bike.

We here at the Huffman Bicycle Club are seldom happy unless we're tweaking our rides. But with the Boris I'm not so sure. It's a cheap bike, and if I spend money on upgrades it'll be a cheap bike with a few expensive bits and pieces. For now, while I'm considering upgrading the tires (the stock Vee Mission tires are much derided by those in the know), I'll probably hold off on more expensive upgrades like rims and components.

It's not hard to spend 4 figures trying to shave a pound or two off a road bike. Were I to try, I have no doubt the same money could take 8 pounds off the Boris. But if I decide that I like fat-biking, I would probably come out well ahead by selling the Boris on Craigslist, and picking up a better brand with better components. You know, like the Salsa Beargrease, which allegedly comes in at about 24 pounds... Yowza.

I'm planning a couple trips to snow country, and will try to bring the Boris with to give its intended usage model a try.

For $800 the Boris is a buy. It's cheap and, while a hardtail is just a full suspension ride that bounces less, a fat-bike is a genuinely different experience. I anticipate the Boris getting weekly use in the future.

I've blogged recently about what a hard guy I am riding in winter weather.  At the same time, my bike is taking a beating.  Returning to the Indy airport after 10 days away, bike locked up under a roof but in the open air, I was shocked -- appalled! -- at the grinding, squeaking, and shrieking from the drive-train.  It turns out 10 days well below freezing wreaks havoc on Shimano 105.

Working some long hours, so I haven't made it to the bike shop during open hours.  Water on the chain alleviates the symptoms for long enough to get home, but needless to say, that is not a long-sighted strategy.

Time to ride home after a long day.  What to do?  In the under-desk fridge I found . . . Newman's Own Balsamic Vinagrette. 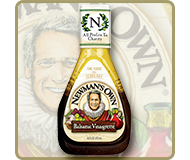 Fortunately about Newman's Own:
1.  No weird ingredients. Oil, vinegar, and spices.
2.  Oil rises to the top.
3.  Less expensive than real chain lube!

The chain hummed like a country ballad all the way home.  And it smells phenomenal!

So, vote:  badass or herbivore?  (Poll on the right.)
Posted by Max 1 comment: