I inherited the Specialized Sequoia from Dad in 2005.  Sam didn't need it and, frankly, I suppose I did.  My only bike at the time was the white IRO Jamie Roy fixie.  This is so long ago I no longer have a picture of that one.

But here is the Sequoia of which I speak. 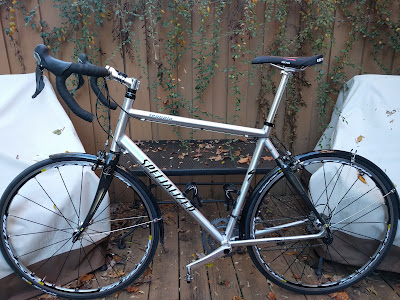 It is a pretty, aluminum, compact-framed, bike in extra-large.  This is back when the height of technology was to add carbon forks and seat-stays to dampen the ride.  Whether dampening was achieved is anybody's guess, but it looks a step more technical than just another aluminum-framed bike.

The Elite version was a Shimano 105 build and came with curvy "randonneur" bars.  (Drop bars with funky backward curves in the flats as well as outwardly flaring bar ends.)  It had an adjustable stem of the sort one uses when one is unsure of fit and needs to experiment for a while.  It had an old-school suspension seatpost, the kind with a rubber boot hiding a dampened spring.  It had a triple chainring and a cheap builder-spec. set of wheels that blew a spoke the first time I tried to ride it any real distance.

On the upside, the frame is an infinitely durable aluminum frame with a nice finish, three sets of water bottle bosses, traditional straight (not tapered) head-tube, threaded bottom bracket, external cable routing, and road spacing (130mm) for the rear wheel.  In other words, a bike that can be rebuilt with very little drama.

Dad bought the Sequoia with the idea it would be a winter touring bike, permitting him to traverse some of the southwest desert.  In particular, I remember Dad's interest in riding through Needles, California, which seems a little random -- but there it is.


What to do with it?

Option 1 was always to find a good charity to receive the bike as a donation.  Here was my problem:  the Sequoia had enough nostalgic value, to me at any rate, that I wanted it to be owned by somebody who would appreciate it.  A donation to Goodwill, for example, would ensure this bike got sold for $75, locked up outdoors with a U-lock on some college campus -- until it was vandalized by some fraternity jerk wrapping the frame around the no parking sign to which it was locked.

It used to be a capital crime to steal a horse in the American frontier.  Or, more likely, that is a rural legend.  I'd be happy to institute such a severe penalty for bike vandalism, however.  I mean, we don't see people randomly wrecking parked cars, do we?

A better charity would be one that used the bike for a needful purpose.  Think a bike racing team in a high school for students with insufficient means to bring their own bikes.  Personally, I'd love to found such an endeavor.  But I have been unable to find one currently in existence.  (I did find a group in Philadelphia that purported to use spare parts to build nice bikes to donate to inner-city kids. I e-mailed and offered to drive a trunk full of nice Shimano parts to them for reuse, but never received a response.)

Option 3 was to keep it handy for Sam to ride when he visited.  And once recently, we used it for just that purpose -- Sam and Mom were in town on a nice March day and we did some wine touring, with Sam and me riding 65 or so miles in total.  Not a bad ride for early in the season.

But other times the bike was stored too deep in the closet or not quite built up or whatever, leaving it unusable just when we needed it.

Over the years I swapped the brifters to 10-speed S105 and the crankset, bars, stem, seatpost, and wheels.  That's the bike you see Sam riding above.  But it still didn't sing to me.  The Gunnar rebuild freed up:
I already had:
It takes about a day, if you are relaxing while doing it, to strip, clean, and build a bike.  As I've reported here recently (see "Wham-O"), I had many days since last April when riding was not really an option.  Here is what came of it.


Finished product and a new use model

I have not had a wet weather bike in the house since, well, ever.  Instead, I ride the nice bikes until they start to grind and then I hose them off until they are shiny again.  This should serve very nicely -- and when Sam comes to visit, it should serve well for him.

I can't get over thinking it's a little awkward looking.  That skinny seatpost really sticks up there.  The 25mm tires make for small looking wheels after years of riding 28s or larger.  (Wait until you see the sweet 38mm tires on the Ritchey in the next installment!)  The Ksyrium wheels are a touch bling for a classic-looking bike.  That head tube, plus spacers, gets really, really tall.  I think this bike would look good with much larger tires -- but nothing bigger will fit with the fenders.

All in all, quibbles and minor regrets aside, I call it a successful rebuild!  In my opinion, the 2004 Specialized Sequoia Elite is a now-classic bike, ready for real use!

You should bring some of the new toys out to play on an autumn day in the near future. I had a delightful solo 200k spin through the countryside yesterday. It put Zwift in perspective for sure.

Any chance I can tempt anyone into a 12-hour race at Sebring? I think I'm going "short" next year, after having raced the 24 in 2014-16. It can be a pretty pleasant time to be in Florida.

Both sound attractive. More 200K than 12-hour, but I'm open to talking about February as well. Assuming we survive the end times, that is.