I bought the Ritchey Steel Cross Breakaway in 60cm in 2014 as part of a two-bike investment preparatory to a anniversary trip to Grand Cayman Island.  P_ and I rode the bikes in loops around the east, less populated, end of the island, maybe 100 miles total over a four day trip.  It was a blast.  Review of the bike, including its use on Grand Cayman, here.

There were a couple of other uses as well -- Colorado and Oregon/Washington in 2014 and 2015 -- but the bikes largely stayed in their cases waiting for a grand cycling vacation that never arrived.  (Not that we didn't vacate with bikes.  Just that we didn't bring the Ritcheys!)

I decided to give the Ritchey another try.  For this third post in the Tale of Three Bikes series, more on the rebuild and new use model below.

I discuss the original build on the Breakaway here.  To summarize, it was a nice bike from the start, but I had some gripes.  One big one was the pull on the Shimano 105 levers was not optimized for the cheap Tektro cantilever brakes.

Another was that the wheels I used, a lovely set of custom built (by White Mountain Wheels) hoops with White Industries hubs and Sapim CX-Ray spokes, were too narrow to run a really wide tire comfortably.  35mm Schwalbes on 15mm internal-width rims felt a little unstable on hard corners.  I didn't love the oddly curved handlebars, the "randonneur" bars pulled from the Specialized (see former post).  The post and stem were parts bin specials, scratched up and not matching.  And I was not thrilled with the look of a silver Ultegra 6600 crankset with a black 105 groupset.  Small matter, I know, but it bugged me.  Somewhere along the way I switched the brakes to V brakes, which solved the compatibility problem.

And when I was in Oregon and Washington for a few rides in 2015 I completely rebuilt it.

This project required me to steal a recently orphaned Ultegra groupset from Sam after he went to 6870 (Di2).  I felt bad and payed him a few hunny after the fact.  But the bike now had a smart-looking full Ultegra 6700 group in the pretty dark gray coloration.  The cassette is a 12-30 10-speed and the crank is a 50-34, plenty wide gearing for all but the most extreme rides.

The bike still had the awkward bars and the problem with the wheels.  Back home, then:  the new carbon bars for the Gunnar freed up a nice set of 3T Ergonova pro in the white and black coloration that looks good with this white steel frame.  I had replaced the Gunnar stem, a Thomson X4, with the lighter-weight X2, and the X4 moved onto the Ritchey.  And I located a Thomson Masterpiece seatpost pulled from one bike or another, which matched well.

Finally, recently, with the Gunnar taken apart for a factory repaint, I built the bike back up and put on final touches.  I found TRP brakes that are optimized for Shimano levers and available in pretty red anodized finish.  I ordered a cheap set of eggbeater pedals with the same finish.  Red skewers and cable crimps, new water bottle cages (plastic, better to survive packing), and a under-the-down-tube pump mount.

The coup de grace was the wheels.  I had a set of Hed Belgium rims built onto a White Industries front hub and a Powertap rear many years ago (by Neuvation, of all places).  They have been gathering dust and the rims give me 19mm internal width -- ample for a larger set of tires.  The new build has those wheels with 38mm Compass Barlow Pass shoes.  It makes for a beautiful combination.

I kept the old wheels, mounting them with a set of 32mm Schwalbe knobby tires.  Whether for cyclocross or just for muddy roads remains to be seen.

And I finished the build with white bar tape, which surprised me a little just how well it went with the red anodized components, white and red frame, and black post, saddle, stem and bars.

IMO even the old-school Planet Bike blinkie, which mounts nicely to the threads designed for rack or fender mounting, contributes to the look in a positive fashion.

I'm pretty psyched about this innovation:  I built the remote switch for my Exposure headlamp into the bars, with the cord wrapped under the bar tape.  This makes switching on or off (or adjusting the brightness) with the thumb while riding a breeze.

Some more pictures of the final build: 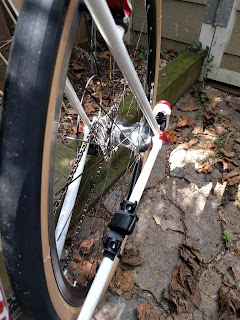 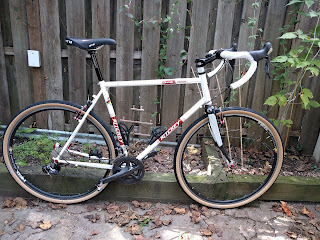 I rode the bike 35 miles just after finishing the build.  The brakes work like a dream.  It is a comfortable fit.  With 50 lbs of pressure in the 38mm tires, the ride is downright plush.  The ride included maybe 15 miles along the C&O Canal towpath, a gravel road running north from DC -- and a famous cycling venue that takes on all the way to Pittsburg.  There was no difficulty, even general comfort, riding on pavement, dirt, and back on pavement again.

What to do with this bike?  First, it still works as a travel bike.  I have never paid a baggage fee in maybe 10 flights.  Packing is annoying but not hard.  (Other bloggers, like the commenter on my bike review post from a few years ago, who brag about the *ease* of packing are riding smaller bikes.  With my 60 cm frame, this is not easy, but it is possible to pack the entire bike in a nearly airplane-legal 66" case.)

Second, this is my fattest tire bike that is not literally a fat bike.  As such it should make for comfortable use in touring applications (including light-touring and randonneuring).  To confirm the success of that use model, I built it up with a beam rack, trunk bag, and handlebar bag. 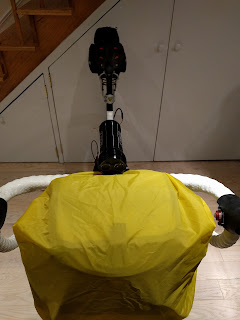 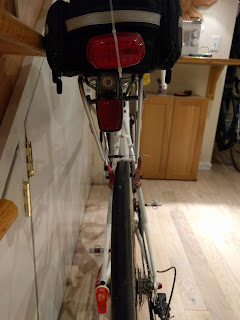 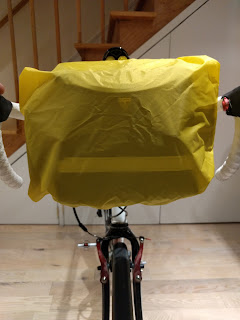 It all fits and doesn't look ridiculous, which is a start.  I have not ridden the bike thusly loaded, however.

One final problem remains.  Consider the headlamp in the last picture, above -- just visible over the handlebar bag.  And see it again below.

I may need a lower profile handlebar bag or a different headlamp attachment point.  I regret this -- I think the build and loading here is pretty elegant.  With more experimentation I am sure it will work out.

A new build for the Ritchey Steel Cross Breakaway -- and, I think, a successful one this time!
Posted by Max

The build looks great. I'll confess that I'm most envious of the 38mm tires.

This is a good series. I'll have to copy your format with my upcoming builds.

Looking forward to those posts. Because if I remember right, there is a pretty good collection in your garage needing finishing.

Right, well what do you think we're doing over Thanksgiving?