As Digby noted in a comment to the last post, we've been absent for some time.  Not off the bikes, but out of the blogging habit and all that.

Some cool things to report.  Here is one of them.  My "Tale of Three Bikes."

With fewer miles since the April wreck and most of those commuting, big rides have given way to lots of fun in the basement workshop.  Three bikes are either rebuilt or being rebuilt and need to be publicized.  Here's the plan:  a four-post series.  Or maybe more than four.  This one says what is coming.  Post two will be about the Specialized Sequoia.  Post three about the Ritchey Breakaway.  And post four, or maybe four through six or so, about the Gunnar Roadie.

I inherited this aluminum-framed touring rig from Dad in 2005.  Sam already had more bikes than he could justify and at that time I did not.  I've never quite known what to do with it. 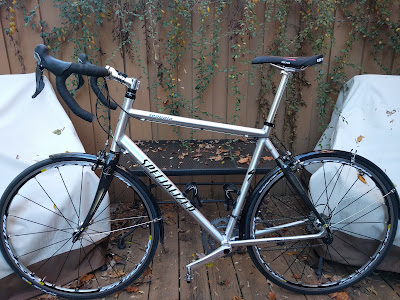 The most recent rebuild may have clarified all that for me.  Look for the next post in this Tale of Three Bikes series for a full report!

I purchased this as one of a two-bike set for my and P's 10th Anniversary, which we celebrated by riding loops around the east end of Grand Cayman Island, stopping occasionally to snorkel and to drink Mojitos. 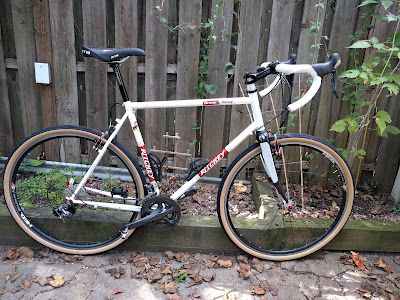 The Breakaway has never been a go-to bike in my stable.  I have not got down the packing and unpacking thing -- one issue, which I will discuss in a later post, is that a 60 cm Breakaway is a very different packing chore than is, say, a 56-incher.  What the bike does have going for it is huge tire clearance.  And it is a pretty, thin-tubed, steel-framed, bike.  Look to the third post in this Tale of Three Bikes for a discussion of the rebuild.

This bike, my present for P's and my third anniversary, has been my go-to cycle for nearly a decade.  It is, in my opinion, simply beautiful.  It rides nicely.  And as a classic steel framed bike, it can be rebuilt easily to keep up with the times. 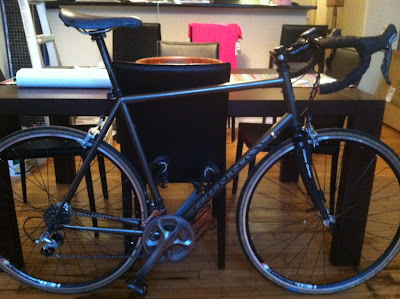 Here is the Gunnar after an early repaint and rebuild. 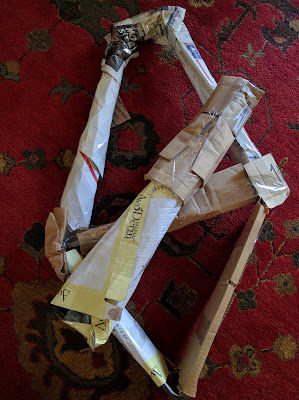 And here it is, ready for transit back to the Waterford factory.  Time for a return to its original color scheme of "Sunset Red over Fine Gold" -- and a few other updates as well.  In particular
I also have in the house a substantial collection of parts gathered over the past several months.  Suffice it to say the Gunnar Roadie will be the nicest bike I have ever owned when finished.

Blogging is back at huffmanbicycleclub.  Keep an eye out for further posts in the series!
Posted by Max