Sam is playing coy with the news of the Habanero rebuild, though I snuck a peak at the draft post and can give a sneak preview:  sweet. 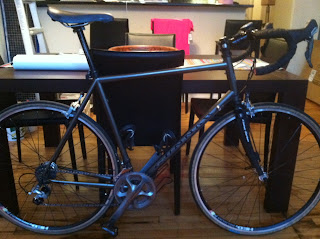 Here's the Gunnar.  It needed less work than the Habanero, being newer and having become less of a frankenbike over the past 7 years.  (Having said that, and again, referencing only a draft blog post, I have to say the results from the more complete work on the Habanero is an argument for a total overhaul at least once a decade.)

What's new with the Gunnar?  New Ultegra 6700 groupset, with one alteration:  the front derailleur is (new) Dura-Ace 7800.  New Thompson X4 stem (a tad beefy for road use, but it matched the seatpost.)  New Richey UD fork, courtesy of Sam (who apparently has no bikes with 1 1/8" head-tubes).  New FSA compact bars with flat tops.  (I first rode compact bars in Alaska last summer on a rented Trek Madone. I'm hooked.  The drops are just about right to actually be comfortable riding low.  Maybe you don't get as low as you could on full drops, but when you never ride in the drops because the position is too low, you don't gain much aero benefit from the position now, do you?)  Pedals are new Look Keo, my new standard for everything except the Specialized.

The wheels -- Hed Belgium rims, Powertap rear and White Indus. front hubs, 28 Sapim CX-Ray spokes, built by the Neuvation custom wheel-building juggernaut -- are not new, but they have seen precious little outside riding, something I intend to fix.  Current shoes are Gran Bois 26c with latex tubes (if tires are shoes, are tubes socks?), but I expect to take advantage of the wide Hed rims by swapping these skinny tires for some 28c Gran Bois, also with latex, when I get to DC.

Only things really old are the three cages, seatpost, and saddle.  Cages may get swapped for those nice Chris King titanium ones, which I hope will match the light grey crankset and be somewhat more durable than $15 carbon from Origin8.  And I see no reason to mess with a good thing on the saddle and seatpost.

Now I have to work on the peripherals, by which I mean all the gear one has to carry to ride a long ways.  I think I will mount the ultra-small Topeak pump in the traditional compact pump position (tucked behind the seat-tube water bottle.)  I have not sorted out the aero-bars yet, but I know I need them.  Partly for vanity, partly for weight, and partly because I have gotten used to them I expect I'll use the stubbies.  Lights will be threeX Portland Bike Works taillights and twoX DiNotte up front, with a cheap Planet Bike LED blinkie for a backup.  And I expect to carry two computers -- the fail-safe wired version currently mounted, plus the Garmin on most rides.
Posted by Max

It looks great. I'm a huge fan of that frame, and of small-diameter tubes in general.

The one question I would have is the inclusion of the Powertap for what otherwise seems oriented towards a long-distance rig. Just an opportunistic addition?

I'm pleased with the Ti King Cages, I think on a metal bike they look really sharp, and actually offer some useful functionality as well.

I'll be curious to hear your thoughts on the latex tubes.

Powertap is a fluke. I had the wheel built because the Powertap was a good deal. Then I needed to use the wheel for something, but I have deep-dish rims on my racing bikes. I had a matching front wheel built, so I have a wheelset that is primarily useful for longer distance (lots of spokes) that happens to have a powertap hub. I'd prefer it on a different wheelset,but I'm not sure how to make the change at this point.