Max really showed me up at Thanksgiving, picking up a sweet Neuvation FC600 for his spouse. It's tough to follow that without looking like I'm just copying him, so I'm trying the next best thing: a tandem.

Honestly I've always been curious about tandems, but have never ridden one. The problem is that it's really tough to find a tandem that fits properly. Since you have to have a single frame that fits two people. There are a lot of really crappy tandems available on Craigslist, but honestly I'm past the point in life where I'm interested in crappy stuff. On the other hand, I'm not particularly interested in spending $20K on a Specialized Carbon Fiber tandem either.

Fortunately while perusing my favorite bike maker's website, I noticed that he is building tandem frames.

I got my first Habanero back in 2004, after spending a year or so riding Max' Cannondale. My Habanero was built by the inimitable Sheldon Brown, marketed as the 'Century Special'.

My second Habanero was targeted as my rando bike. My original Habanero had a ~5" drop from the seat to the bars (now modified to be a much more reasonable ~2"), and by day 3 of a 1200K I found myself riding entirely on the pads of the aerobars. So #2 was a 62cm frame, based on Habanero's cross geometry.

I really like Mark Hickey's philosophy. He acknowledges that he over-engineers his frames and builds, which for those of us in the 100kg+ club is a welcome relief. So I pinged him about the tandem frame, and he responded nearly immediately with a lot of great detailed information.

I still need to make, well, pretty much all the build decisions. The sizing will be interesting, as I'd prefer the geometry of my 64cm Habanero, but the stoker will be coming from a 52cm or 54cm bike (not sure which. Need to measure).

There are a few other important decisions to make as well.

They do have a disk version. Mark suggests not to go that route, and I'm inclined to follow his advice. I'm not yet convinced of the integrity of a CF disk fork. It s tempting though.


One of the advantages of a disk fork is additional tire clearance. My other Habaneros fit 26s well, 28s with a bit of luck, and almost certainly nothing larger. Mark says that he can probably design the bike to take a bigger tire. But too big, and brake clearance becomes an issue. A disk brake would take care of that problem.

As I mentioned above, the rider size differential is moderately challenging. 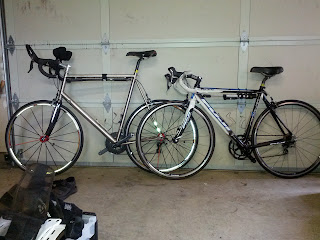 I've no doubt that Mark can make it work though. I haven't picked his brain too much on this yet, and probably won't until after the holiday vacation.

My plan is to go with a pretty standard build. Ultegra components, and whatever is the equivalent of Open Pro wheels. I think the Velocity rims are popular for this purpose. Hopefully nice fat tires. It's not clear yet what the price will be. My hope is to keep it under $5K. Seems possible.

I really don't know what goes into a tandem build at this point. I imagine there will be a lot of questions that arise along hte way.

While poking around his tandem build info, I couldn't help but notice he's now selling 29er frames. Of course I just sold a nice single-speed 29er, but the prospect of a hard-tail geared 29er in a fetching Ti finish is enticing. Might have to wait until after I get my Motobecane Boris set up though.
Posted by sam

Forks: you are smart on eschewing the disc. Maybe it's robust, but I wouldn't want to be hammering on the brakes of a 350 lb. freight train, given Jan Heine's assessment that in the best of circumstances disc brakes tend to twist the fork on hard braking.

I'm not sure I see the tire clearance problem if you are using cross-style brakes (what do you call those, anyway? Not V brakes . . .) Don't you run 32s on your second Hab?

Which raises another question -- I thought I had heard of dual front brakes on tandems. Can you have both disc _and_ [whatever you call them]?

Not that you have a hard time finding good wheels, but Ron Ruff at WMW can surely build a 36- or 40-spoke setup on a heavy duty rim. Isn't the Mavic CXP-33 a famously durable hoop?

This is going to be awesome. Can't wait to read more.

Finally: re the Specialized, you never bit on my suggestion that we buy that and go on a racing spree. I think we could win the category in most long distance races in this country. It would be annoying to get beat by the top solo riders, of course.

The usual brake for tandems is apparently the cantilever (that's what I've got on my rando habby as well). Though v-brakes are also popular. I loathe v-brakes, so will probably go with cantis.

According to Mark, one just has to be cautious to get a brake with sufficient reach, and that should take care of the tire size problem.

From what I've read, a lot of the brake concerns owe more to to the extreme loads from loading touring. Imagine a typical touring team (maybe 350 pounds of rider + 50 pounds of gear) descending a mountain pass at speed. The twisting forces there are no doubt tremendous. I doubt anything this bike will see will approach that load.

The other issue is rim heat. Rim brakes can heat up the rim and cause a blowout under the same situation. Apparently, as you alluded to, one approach is to employ a third brake, usually a drum brake on the rear wheel, for these cases.

I'm planning to go with the 2-brake canti setup. Should we find ourselves descending mountain passes, I guess I'll just brake early and often.