I sold the trusty WRX.  One too many times in a spitting match with a(nother) highway jerk convinced me I didn't need 265 horsepower and a hood scoop that may as well have been a neon bumper sticker reading "my car is faster than yours."  And I was feeling the 4 1/2-year itch.  I replaced the WRX with this cute little number, which I found at an end-of-model-year bargain price.  To my view it befits my official status as "middle-aged."  Quick review: after three or four days, it is a dream to drive.

The trouble is that a coupe with a sun-roof is less than ideal for a roof-rack.  To BMW's credit, the car incorporates standard rack-mount screws in the gutters, much like the WRX had, so my current Yakima rack would work seamlessly on the new car.  To my view it looks pretty cool, but a little too much like a Jetta. 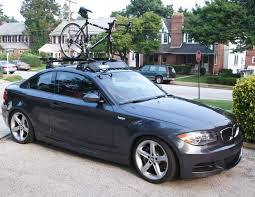 There's the further problem that a rack interferes with sunroof-open driving.  Perhaps the coolest thing about this car is that it has a huge amount of glass, such that with the sunroof open (or even the shade open) it feels almost like a convertible.  I also abhor the mileage hit you take with a roof rack.  Even with fairly careful highway driving the WRX averaged less than 25 mpg with the roof rack in place.  I'd like to think I can increase that by a fair amount with this non-turbo replacement.

Two other obvious options:  (1) the hitch rack. Yakima, Thule, Saris, and a maker I hadn't heard of -- Kuat (umlaut omitted) -- all offer high design-factor hitch racks, with the Kuat appearing to be the king.  There are myriad off-brand options as well -- Hollywood, Sportrack, Swagman, and Bell, to name four.  In hitch racks I would only be interested in a tray-mount version, which appear to secure the bike more solidly; do not involve hanging the bike from the frame (which causes cable rub on my externally-cabled bikes); and look much cooler.

And (2), the trunk rack.  Many of the usual suspects market trunk racks -- Allen, Hollywood, Yakima, and Sportrack pop up in an Amazon search, with the Saris Bones being far and away the most attractive of the lot.  I have a three-bike Saris Bones that I bought several years back.  It would serve my purposes well and cost nothing (because I have it already and the aftermarket value is sufficiently low to eliminate opportunity costs).

Trunk racks have the huge advantage of easy mounting, removal, and storage, being light enough in weight and small enough in size to stay permanently in the car's trunk.  They are sufficiently cheap that one needn't worry about rack thievery.  They suffer the disadvantages of lack of security -- no good way to lock the bikes; minor inconvenience in mounting and removing (or annoyance in leaving it permanently affixed); and a danger of marring the car's finish if dirt gets in the rubber feet, nylon straps whip around while driving, or the bikes swing and contact the bumper.

I suppose the answer is to experiment before dumping at least half-a-thousand dollars, including a new trailer hitch(!), on the hitch-mount option.  Input from the crowd?
Posted by Max

Nice ride! For someone who will go to the ends of the earth to avoid spending an extra $100 on a bike frame, you evidently have a different value metric for car purchases.

I have the Thule T2 tray-style hitch mount and like it quite a bit, although it's a bit bulky to leave on there full-time and makes it a little bit tedious to access the trunk. I think I'm going to put it on before big events, but otherwise I'll just throw my bike in the rear of the vehicle.

Ultimately, yes, the seats-folded-down bike-in-trunk approach is probably the day-to-day plan. Could even work with two bikes, I think, but it would be an engineering challenge. For a long drive it would be worth it but for a trip to Luray Oly probably not.

I've seen interesting comments on the suction cup roof mount (seasucker). Might be worth checking out.

I like that Seasucker! As a travel rack, if nothing else.