John Neugent had (still has) his FC600 on a great sale and we were heading to San Luis Obispo to ride anyway, so I ordered one for P__.  It prevented our renting a bike at a ~$150 cost and saved ~$300 in round trip carriage, turning the $2000 sale-price bike into a net $1850.  Putting that into perspective, this is about a 16 lb. build, which I can find elsewhere for something closer to five large.  OK, four at off-season pricing.

Trek's may have its Project One, but for no additional cost Neuvation allows for a fair amount of design and configuration customization.  We had this bike built with brand new Ultegra 11-speed, including a monster dinner plate on the back that puts P__'s lowest gear at a hill-gobbling 34-32; a high-angle stem that brings the bars nearly level with the saddle; and Neuvation's comfortable S1 saddle that P__ rode and loved on the demo bike while in SLO.  We requested blue decals on the frame and wheels; blue nipples on the front and non-drive-side (Neuvation won't build with alloy nipples on the drive side, which I applaud); and blue bar tape to match.  (In my judgment the bar tape may be slightly over the top, but it is easily replaced). 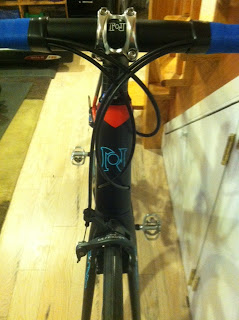 I added the tail-light, without which I personally refuse to ride anymore; the speed and cadence sensor; and the mini-pump.  The only thing still missing is a computer that can receive ANT+ signals, whether that is a GPS unit or otherwise.


P__ loves the bike.  (She hasn't actually ridden the new one yet, but she did get ~50 miles on a similar setup over a few days in San Luis Obispo.)  Which brings me to answer to the question, "why do you buy an occasional cyclist a brand new carbon bike?"  There are two obvious reasons.  I've probably just paved the way for my next four-digit bike gear purchase, whatever it may be.

The second is better:  I wasn't a British car guy until I bought a 1957 MGA in the summer of 1998.  I'll probably never again own a British car, but I will always be a British car guy.  P__ may not have been a cyclist but getting her this bike is making her one.  I'm looking forward to some great rides together this spring.
Posted by Max

No two ways to put it; that's a sharp bike. Agreed that the handlebar tape might be one highlight too much, but it's a great bike (and a great value!)

I'm starting down the path of a habanero tandem. Will have to get a post going.

I can't wait to hear more about the tandem. The better post, of course, will be after the first few rides!