Settling... For a beautiful custom titanium and carbon di2 bike. And also cutting the steerer.

I've written about my selling spree, and even about my mixed feelings about listing my custom TiCycles bike. The issue was that I was riding my other bikes, and not the TiCycles. So selling it seemed the right thing to do.

I priced it at a premium, varying the price between $3500 and $5000, and got two very serious buyers. The funny thing was, though, both times as it came close to selling, I felt significant regret followed by relief when the sale fell through.

Several weeks ago I was out for a ride on this wonderful bike, and started thinking about what I'd do when it sold. I'd probably buy a new frame from Habanero, exactly equivalent to my the old Habanero road frame on which my TiCycles frame was based. I'd put on Red eTap, carbon fork and bars.. All in all I was envisioning a sweet build. And then I looked down at my TiCycles and realized it was already a sweet build.

When I got home from my ride I deleted my Craigslist posting, and I've ridden the TiCycles quite a few times since (some of that is because I bent the derailleur hanger on my Litespeed).

So as silly as it sounds, I'm settling. As long as I'm settling, I decided to finish up a project I started 4 years ago. This is the bike as I originally received it: 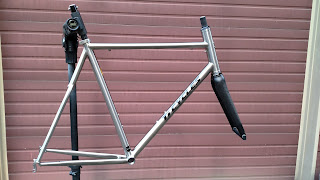 I quickly swapped out the included generic carbon fork with an Enve. Just for vanity purposes. 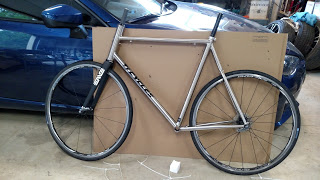 Look at the length of that steerer! I actually built up with that initially. 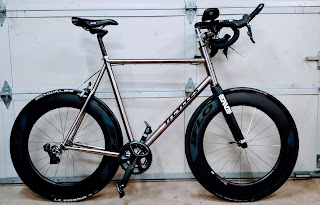 I honestly don't remember trimming that, but apparently I did. But I still left an inch of steerer for later adjustability. This is how I've been riding the bike for the last several years. 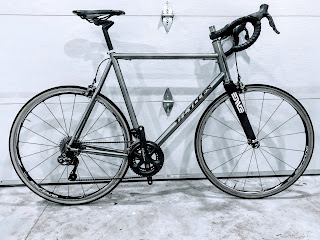 After my decision to keep the bike, I decided to finally deal with that ugly chimney. It's always bothered me, but I just didn't see any good reason to cut it off. 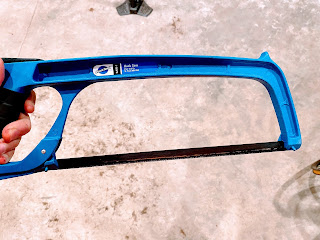 Of course you can't cut a steerer without Park Tools. The hacksaw comes with a blade intended for cutting softer material like carbon fiber. 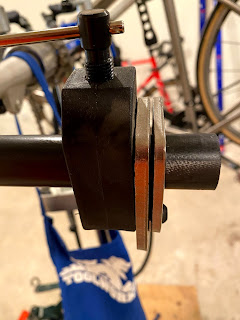 And of course the hacksaw guide. To be honest, I kinda winged it on this cut. Didn't measure especially carefully, which in hindsight was pretty stupid. I also didn't do the obvious step of taping the stem to get a cleaner cut. 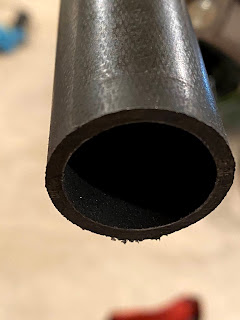 But the cut turned out pretty clean anyway. I'm happy with that. 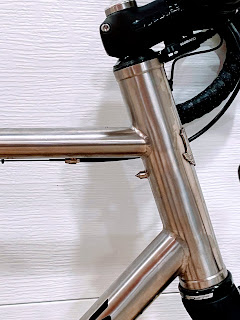 Enough steerer left for the recommended small spacer on top of the stem This is to ensure that the stem's bolts clamp a little further away from the end of the steerer. I'll probably buy a carbon fiber spacer to replace the titanium spacer currently on there. 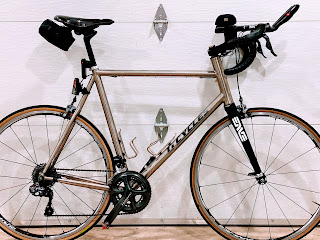 Not a great picture; no bike looks good with aerobars on. Especially if those aerobars are on 50mm risers. But this looks better than it used to with that massive chimney above the stem.
I rode this bike back-to-back with my old Habanero Rando bike recently. 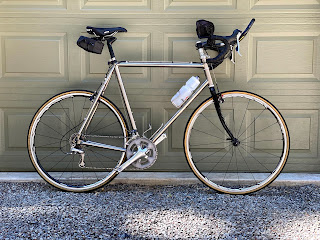 It was an interesting comparison. The TiCycles rides much "taller". When I don't ride it for a while, I sorta feel like I'm going to fall over the front of the bars on the TiCycles. After a few miles of course it feels great again. Meanwhile my old Habanero feels like the touring bike it is. Like an easy-chair. But then look at that stack on the Habanero! Perhaps I have another steerer to cut in my future!
Posted by sam

Good finishing job. Pretty sure I have a carbon spacer, yours if you don’t find one soon. Everybody should have a pure roadie, so glad you still do.

A touch surprised you still have that carbon cutaway on there. Comfortable?

Yeah, it's fine. No better than a Brooks or WTB, but no worse either. The only iffy thing is the lower edge is a little rough on the legs if you're keeping your knees close to the top tube.