To All The Bikes I've Loved Before

It's been a great Spring to sell old bikes on Craigslist. A local bike shop that normally has 2000 bikes in stock currently reports having about 200. Online retailers are similarly short of stock. Shortages are a great opportunity for market forces to kick in. Max' and my bike fleets represent slack in the system, and we've been only too willing to help our fellow cyclists by filling demand.
Tonight I went through Strava retiring bikes I've recently sold, so I figured it's as good a time as any to reminisce, both over bikes now gone and bikes that deserve to be ridden more.
Not every bike in the garage is shown below. Max' old Cannondale, about which both he and I have rhapsodized in the past, is now a wall ornament. Likewise a Mavic KAS a friend raced on in the 80s. 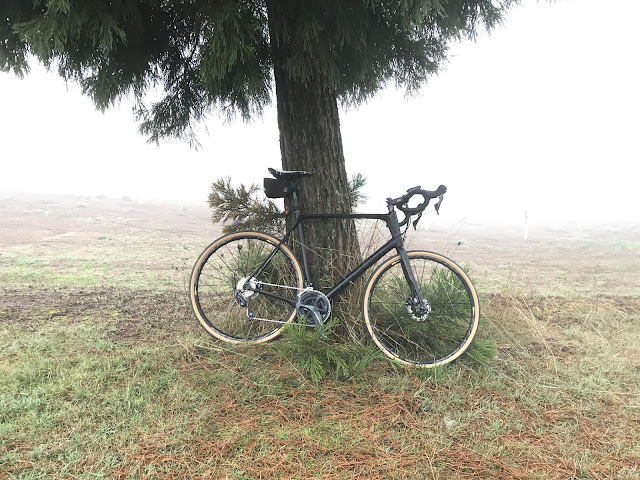 The Focus Paralane was the bike that should have been my main steed for the next 10 years. This really is an outstanding bike, and I'm very pleased to say that its new owner is riding it more than I did. Over the year that I owned it, according to Strava, I put 480 miles on it.
The problem was, for whatever reason, I found myself riding other bikes more. And at the end of the day you have to follow your heart. 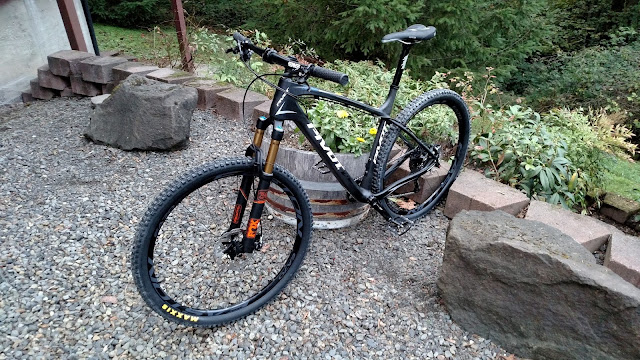 Ah, the Pivot Les. I agonized over buying this bike, torn between it or the Yeti ARC. Again, a great bike. This one suffered from the mail-order bike issue; it just never fit quite perfectly. The reach was a bit short. Moreover when I'm riding with friends I'm usually on a full-suspension bike. Strava puts this bike at about 500 miles, which sounds right. 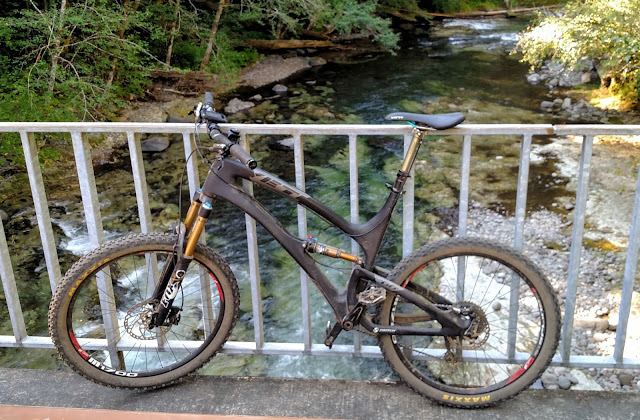 This one was hard to sell. This wasn't my first "nice" mountain bike (that honor belongs to a lime-green Specialized Enduro), but this was certainly the first nice mountain bike that I rode a lot. My primary bike for 3 years, I eventually replaced it with a very similar Yeti SB5.
Realistically I'm just not going to ride this bike anymore. I love remembering the great rides I've had, but the garage space can be used for better purposes. 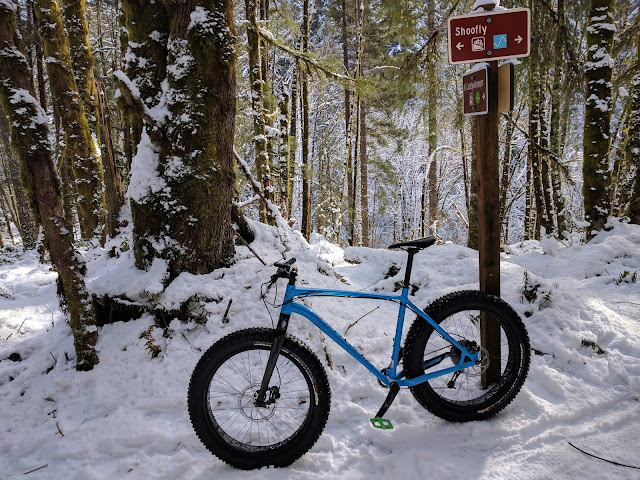 What can I say. This is a fatbike. Max found two of these for sale in Durango, and if his recollection about the price is correct, it was a whale of a deal. This got some use on winter rides, and my experience was that it handled packed snow much better than friends' mountain bikes.
The problem is that in Oregon there just isn't that much opportunity to use a fatbike. At least not where I live. If I end up in a true winter climate, I'm sure I'll get another. But this bike was just depreciating. 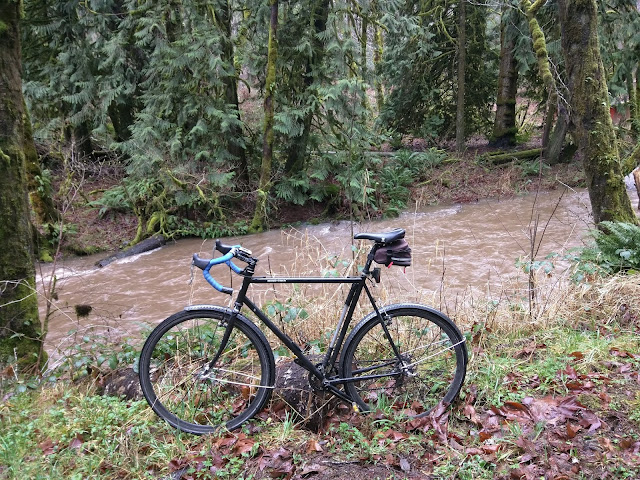 This bike was built around a frame I got on Craigslist, and built up mostly around parts I had in the garage, with an old downtube shifter and some old Neuvation wheels. It was my first attempt at road 1x, and the initial try was a disaster. I didn't truly internalize the necessity of narrow/wide chainrings so the bike constantly derailed.
Once I put on a narrow/wide, the bike was actually pretty darn nice. The issue? It was too small. My other cross-check is a 61cm, and this one was a 59. It made a good rain bike, but if I rode further than 30 miles I'd get a sore back from being too squished. I sold it to a 6-foot tall woman who used to be a bike gymnast.

There are a couple bikes that are either already listed or will be soon. 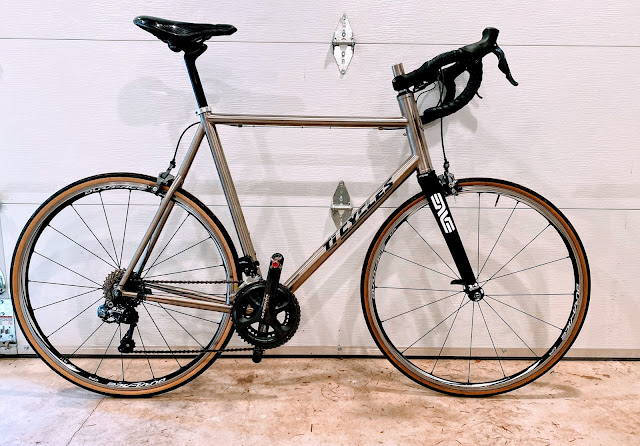 Some time ago I took my Habanero Road bike into TiCycles (a local fabricator) to have them drill it for internal Di2 wiring. They found a small crack in the downtube, so of course I decided the best thing to do was to order a custom Ti frame that matched my Habby's geometry. This was the result.
This is the most "premium" build I've ever had on a bike. Custom Ti frame, Enve fork and bars, Specialized suspension post, carbon seat. Dura-Ace wheels, and Di2 drivetrain. Really a great build. The bike seriously rides like a dream.
I really like it. The problem? I just don't love it. My real problem is that the top tube is too low, leaving too much head-tube sticking up. The head tube is also larger diameter than the other tubing which bugs me. These are in no way flaws, it's just not as clean as I want.
I nearly sold this bike a few weeks ago. The buyer was very interested but ultimately flaked. What I found interesting is that I was relieved he backed out. I've still got it on Craigslist, but it's priced at a premium (which is to say, priced at what I think it's worth, which is a lot). If it doesn't sell, I won't be disappointed. If it does, I'll be bummed but I'll survive. 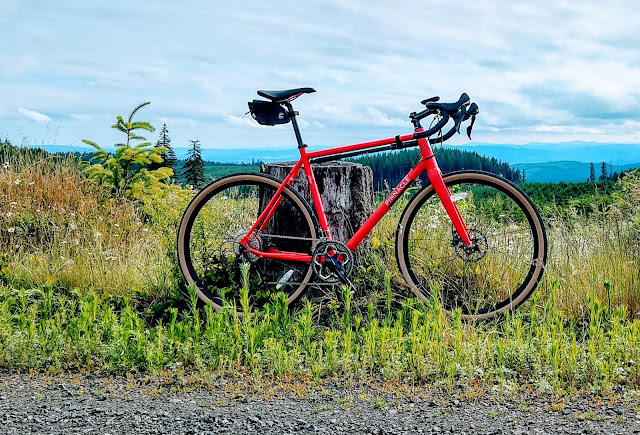 This was my first attempt at a gravel bike. I bought it in 2016 and it quickly supplanted the Cross-Check 1x10 as the winter/rain bike. It's still a good bike, which is why I still have it. I'm on the fence about whether or not to sell it.

This isn't a purge so much as a culling. Thus the garage still has a good sampling of bikes that I ride regularly. 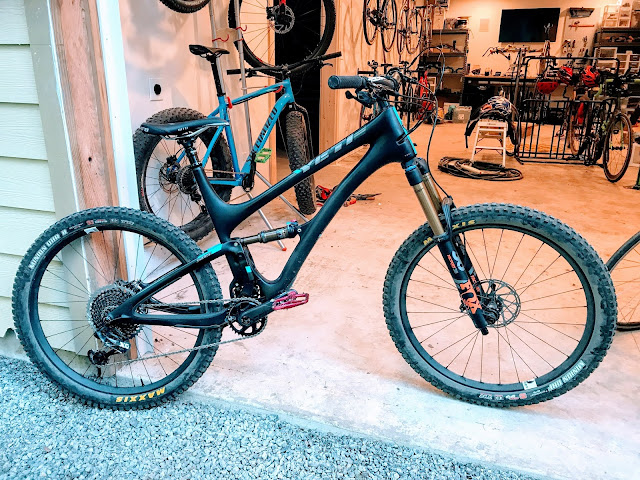 Bummer that I don't have a better picture of this bike, but this'll have to do. This bike replaced my Yeti SB66c. Which is funny because it's almost identical, but with slightly larger wheels. It's a great bike, and I expect this will be my go-to mountain bike for the foreseeable future. Which means, until I find another one. 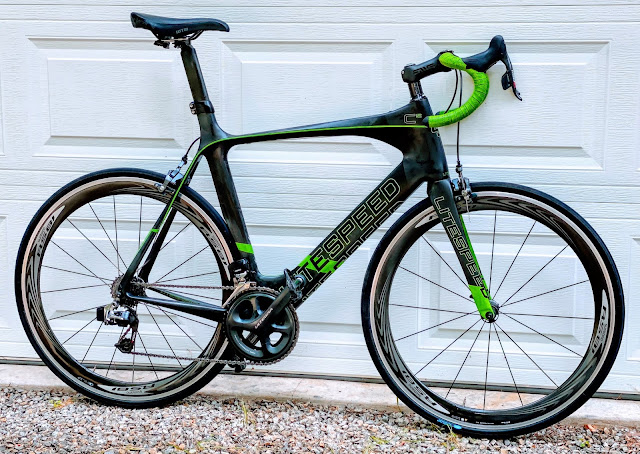 This is a ridiculous bike and I love it. I bought two similar framesets from an online store that specialized in unused team frames. They cost something like $450 apiece. I wish I'd bought out their entire stock.
I don't know if this is my fastest bike, but I ride fastest on it. It looks gawdy, but even moreso when wearing deep wheels 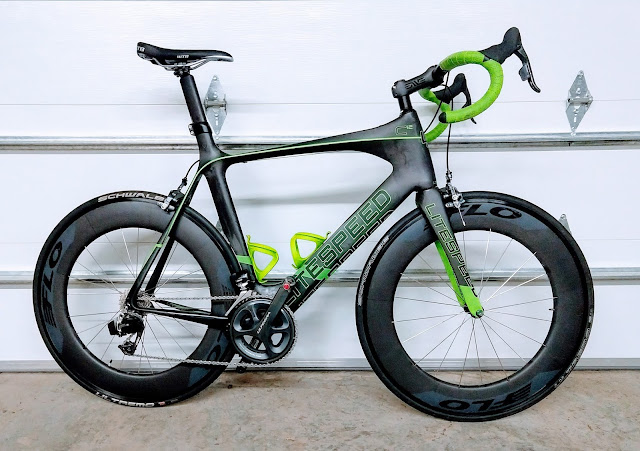 Maybe someday I'll cut the fork, but at this point it's aggressive enough for me. 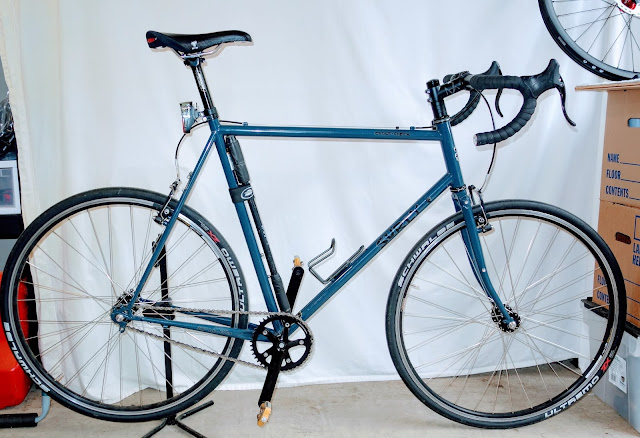 This is the only Surly I've bought already built up. It was a $1000 steal from Universal Cycles. In a year when I'm actually riding a lot, I'll ride this bike all Spring and it gets me into shape by summer. I'm not a huge "fixie person", like not a messenger or anything. But I do really get into the rhythm of cranking up a steep hill on a 42x14 gear ratio. 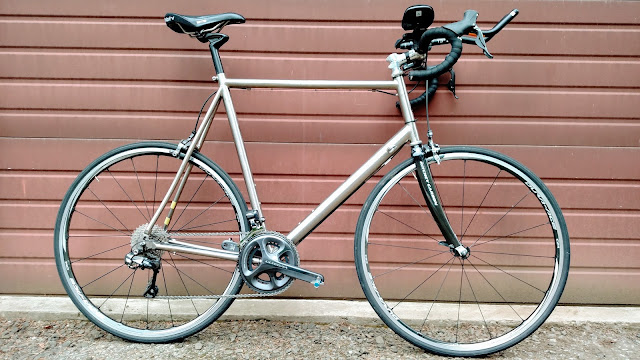 This is the original. Well, my original. Once I graduated from Max' Cannondale I bought this bike, originally Sheldon Brown's "Century Special". Over the years it had several different incarnations, finally finding a permanent home on my Tacx Neo. This bike has tens of thousands of miles on it. It's worth just about $0 to anyone else, but as a trainer bike that fits me better than any other, it's invaluable. 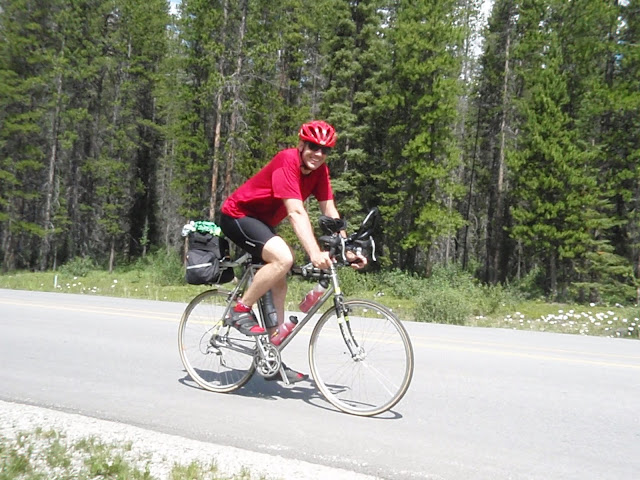 Once I started riding brevets I decided to replace my Habanero Road with a more touring oriented bike. Naturally I turned to Habanero and this was the result. It's a different geometry than the road Habanero but somehow this bike owns my best brevet times for all distances from 100K to 1200K.
Like the other Habanero, this one doesn't have much value to anyone else. Many years of reflective tape refuse to come off, and the reality is it's a cheap chinese Ti frame. I haven't ridden it in a few years, but I'm hatching a plan to upgrade it and ride it again. Not sure yet if it'll supplant the Arkose as winter bike. We'll see. 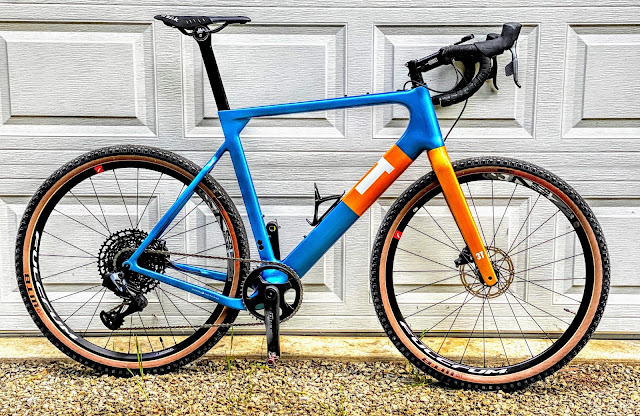 Max and I have written quite a bit about the 3T Exploro of late. It's a good bike that's intended to replace pretty much everything else. I think Max is a bit more enamored than I, but I can't deny its charms. It's a fast, comfortable road bike and a fast, capable gravel bike.
I don't know if this is a permanent fixture in my garage. It has some definite shortcomings that are perhaps inevitable in a low-volume "boutique" bike. At the same time, I can't fault it's capabilities.
Posted by sam

Now that's a collection. Nice work with the sell-off! Is the Paralane buyer your new riding partner? Because I find that really amusing.

I'm 2 down but for much less net than you. It is a surprisingly freeing feeling to unload old bikes. Now I may actually start riding the ones I have left a little more.

I have been wondering what our user experience on the Paralanes would have been if they came built with GRX 1x or Sram Force 1x, maybe even electronic. Part of my problem was that I was looking for a dirt bike and I got that really smooth Ultegra 8020 group. Which would be perfection on a road ride. I almost switched out the group for the GRX setup I bought, but decided to sell instead.

Only thinking this because that picture of full black with tan walls makes a really cool looking bike. Not sure many are that striking.

Agreed it's an interesting question. It ended up being a road-biased gravel capable bike. Maybe 70/30 while the Exploro is more of a 50/50. I felt slightly limited by the tire size (700x35), but had it been a 1x12 I might have felt differently.

And yes, I've become a big fan of the tan sidewalls. I'm sure 5 years from now I'll be tired of them, but for now it's a nice look!