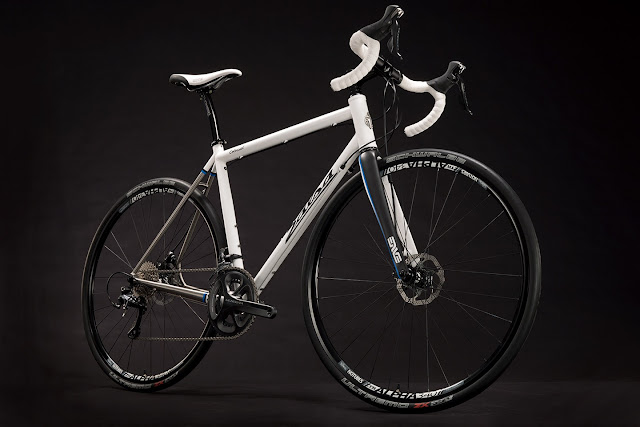 Painted titanium frame.  Thompson finishing kit.  Ultegra group with disc brakes (mechanical).  Enve forks.  Three sets of water bottle mounts.  Pretty sure those are Stan's Notubes Wheels with DT Swiss hubs and spokes.  My price:  $2999.99 shipped to my door.  Or my office, where it should be waiting when I get back in a few weeks.

I've been wanting to ride Titanium since Sam attempted to corner the market beginning in 2004 or so.  Sam's garage boasts four titanium rides with five saddles among them.  Sam has flirted with carbon, played with steel, but always comes back to the infinite-lived silver-colored metal.  My turn, I say.  (With this bike I will have all four major construction techniques covered.  Is a bamboo Calfee next?)

Salsa reportedly has its bikes made in the legendary Lynskey titanium fab.  Or perhaps in Taiwan, per another report.  Not sure I care.  The Colossal is made of the industry standard 3/2.5 Titanium.  (Another, higher alumina-content 6/4 alloy is in use some places, but has not gained serious momentum.)

My one disappointment: it is a painted frame.  Not that it is not pretty.  Just that it adds weight and robs me of the naked titanium look.

The Colossal is a road bike.  It may clear larger tires (see below), but it is clearly built for road use.  The 58cm that I ordered is a close match to the 60cm Gunnar Roadie that I currently own.

Same top-tube and chainstay length.  5mm additional wheelbase length for the Colossal, probably explained by the 1/2 degree relaxation in the headtube angle.  Biggest difference is in the stack of the frame, with the Gunnar at 607mm and the Salsa at 595.  That will require an additional 12mm of spacers to get the right fit.  Because the Gunnar rides comfortably with a slammed stem, I'm not too concerned.  (The seatpost will also need to stick out of the tube by an additional 15mm.  That's fine.  I think exposed seatposts look pretty sweet.) 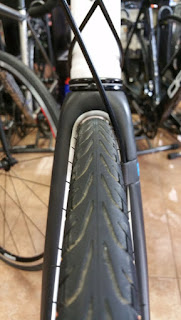 I now have four bicycles that run 28 mm tires and one -- the Ritchey Breakaway -- that can run much, much larger.  I was looking to run at least 32 mm on a speedy road frameset.  The Colossal can just barely do it.

I asked Sharon at Cycle Quest in San Diego for her assessment of clearance for 32 mm tires.  It is not an obvious call, but a svelte 32 should fit.  Here are photos with the decidedly non-svelte Vittoria Randonneurs mounted. 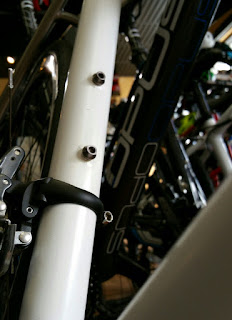 The rear photo is a little hard to interpret.  My overall assessment is that it is tight but ridable.  And if the tread-heavy Vittorias will serve, my Grand Bois Cypres 32 m, currently on the Ritchey, should fit just fine. (The Ritchey gets the 35mm Schwalbe Kojaks.  With a wider rimmed wheel those should work well on that bike.)
I do hope to upgrade to the Compass Stampede Pass 32 mm, probably ELs in that beautiful black casing.  I've been riding the EL Chinook Pass 28mm by Compass for the past year on the Focus and can attest that they are the nicest riding tire in my experience -- better than Schwalbe, better than Vittoria, and better than Grand Bois.
One guy on the Portland to Glacier 1000 was riding the Stampede Pass ELs on his Specialized Diverge.  If these fit easily on the Colossal, it will meet my needs completely.

Current plan, then, is to keep the Vittorias (which Sharon shipped with the bike) mounted for normal use, and to find a second wheelset to mount with shoes by Grand Bois or Compass for more ambitious rides.  (These by Kinesis, at 1550 gms for $311, are tempting.  But realistically I would bet you see me on these Shimano disc wheels with carbon construction similar to the 35mm Dura Ace wheels.)

First Ritchey, then Easton, and now Zipp carbon products have become commodities.  The name in top-end carbon construction in US cycling?  Enve.  Formerly Edge.  (Why the name change, I have no idea.)  I have wanted Enve forks since they were still called Edge.

This is one place the 2014 Colossal (mine) beats the 2015 model.  For 2015 Salsa is mounting its own branded carbon fork.  Surely it is an equivalently excellent product.  But I don't think it is made by Enve.

The Colossal Titanium comes built with Ultegra 2x11 (offering great range: 50-34 and 11-30) and mechanical disc brakes.  After experience with an embarrassingly large number of new bikes and a handful of retrofits with new groupsets -- one as recently as last week, when I stole borrowed Sam's recently removed group to rebuild the Ritchey, Ultegra is my group of choice.  It is light, durable, good-looking, smooth shifting, and yet reasonably affordable.  I keep telling myself that one day I will upgrade to Dura-Ace for a particularly cherished frameset, but I doubt I ever will.

A note:  this is a true Ultegra build.  None of that Shimano 105 cassette and chain that nearly every discount bike seller foists on its customers.

Brakes were something of a bitter pill.  I had my heart set on the lighter-weight and firmer-clamping hydraulic discs, but conventional wisdom says for road use hydraulic brakes are overkill.  You find them on some of the cross/road hybrids they call "gravel grinders," including the 2016 Salsa Warbird, but not frequently on road bikes.  Even the upgraded 2015 Colossal retains the mechanical discs.

And hydraulic disc brakes are expensive.  It's a potential upgrade for one day, but I hope not soon.

Thomson X4 stem.  The X4 is beautiful if a tad overengineered for road use.  A few years back I replaced an X4 stem on the Gunnar with an X2 to save weight.  (Today that old X4 is on the fatbike.)  I will leave the X4 on the Colossal.  But for the seatpost and a set of wheels, I plan to leave this bike stock.

WTB saddle.  I don't know which one.  If it is the same shape as the utterly perfect Rocket V, all will be well.  If not, I have Rocket V saddles aplenty lying around the house.  There may be a saddle trickle down process required.

I thought I might buy the "perfect" bike this time around.  Carbon or titanium; big tire clearance; road geometry; disc brakes for convenience and reliable stopping power; light weight for aggressive riding; and beautiful.

Once again, this does not appear to be quite it.  The geometry may be a little too aggressive for the longer distances I hope to ride this bike.  The clearance will hopefully work for the tires I want to run, but I won't have the option of going really fat for long-distance dirt rides of the ilk of the Oregon Outback Trail.  While I don't race to speak of, I had harbored dreams of the storied Trans-Iowa Race.  This year's presentation was so muddy that everybody failed.  32mm tires with tight clearance would not have served.  (Of course, neither did the mountain or cross bikes that populate that race.)

I do think the Colossal will be an exceptional bike for carrying medium loads over randonneuring distances.  I think it will be a comfortable ride for bad pavement and occasional dirt.  I even think a route like the Great Allegheny Passage and C&O Canal Trail from DC to Pittsburgh, largely on dirt path, is in this bike's hit zone.

Enough for the preview.  Review coming after a few weeks and, I hope, hundreds of miles.
Posted by Max

That looks phenomenal. I'm eager to hear what you think. The price sounds exceedingly reasonable for what you're getting.

New post on the search coming, but in short, I don't think that even using Merlin you can build a bike for this price. So yes, I'm pretty psyched. Hope you might see it when we get our next ride planned.