I just bought the Salsa Colossal after a lengthy internet search for a fat-tire disc brake road bike of the sort commonly called "gravel grinders."  Before I forget what I learned, here is the report:

There is a plethora of mid-spec. options priced in the low $3000s, with sales dipping below $3K.  If you are willing to go for a less-appreciated brand like GT or Diamondback, which those of us old enough to remember the BMX craze still associate with kids sporting rat-tail haircuts and wearing Vans, you can find a very nicely built bike for right around $3.  Hipper brand names like Salsa, Specialized, Litespeed and Lynskey either require you to dumb down the build or to up your price point.

With steel or aluminum construction there are great options in the low $1000s.

And you can build a top spec. carbon or titanium framed bike for almost exactly $3000.  At the end I will tell you how.


Paying for the Brand.  Or for Titanium.

Here is what I would have purchased if I could stomach the incremental $1400:  the Litespeed T5G with full Ultegra and hydraulic discs, on sale at San Diego Cycle Quest for $4399.  First, I like that shop.  (They sold me the Colossal and they ship for free.)  Second, I love the build.  Few are building with full Ultegra and discs.  Third, the brand has some real romantic cache.

Salsa offers its Colossal in titanium.  The 2015 version boasts through axles and, they say, clearance for marginally wider tires.  It isn't cheap, though, at $4499.  Here it is at Cycle Quest.

Salsa has two other bikes that might fit the bill.  First is the Warbird.  The 2016 version looks just awesome in black carbon. The build is a little weak -- top end is a Sram Rival group.  It does have hydraulic brakes. 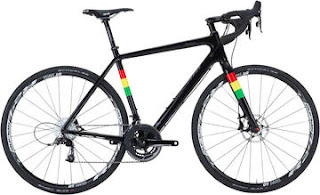 And there is the intriguing Fargo.  It is a true off-road adventure bike.  One might race this in the Divide race.  Probably not for primarily paved-road randonneuring.  Price point for a titanium frame with a nice build reaches $4000 on sale. 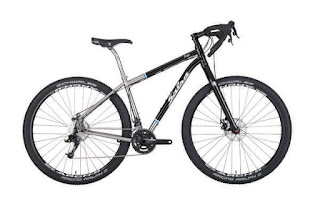 Lynskey is the everyman's titanium specialty bike.  By which I mean it is more available than Moots but way more expensive than a bike like the Habaneros that Sam rides.  Lynskey's Cooper CX is one of those 'cross bikes made for road use.  It ain't cheap at $5500 with an Ultegra build.  In fact, with that Litespeed for $4400, you'd be crazy to shop Lynskey.

Slightly better priced is the Lynskey Sportive Disc at $4400.  This compares closely with the Litespeed, but it lacks hydraulic brakes.  That's a ~$400 upgrade, so I still go with the Litespeed (so long as it is available at the sale price).

Moots makes the Routt, a reformed cyclocross offering that now is marketed for road-offroad riding.  As with everything Moots, it is absolutely beautiful.
It is also unspeakably expensive.  For the kind of build I have been discussing here, we are talking four digits, probably starting with an 8.  Maybe 7 if you find a clearance item, but Moots bikes don't tend to be overstocked anywhere.  In short, forget it.

I searched hard for off-brand titanium options and found little.  Habanero would build a custom geometry for $1595 if you took the time to measure your favorite bike at the brick-and-mortar and send the specs in.  Habanero will build to whatever spec you desire.  As one store told me, custom builds always cost more than manufacturer spec. builds, so there is no way $1595 plus custom build comes in under $3000.


OTHER THINGS I CONSIDERED

Every bike maker has a gravel grinder these days, and I won't bore you with the complete list, but here is one other that tempted me.  Canadian maker Argon18 put out a version with Ultegra Di2 and Shimano's top-spec hydraulic discs -- the Krypton XRoad -- that R&A Cycles had on a July 4 sale for $3999.  The sale has expired but $10 says they would offer that price if asked.  It's a good looking bike and has the virtue of a small market share.  The build sucked just a tad -- who spends $4K on a bike and tolerates an Aksium wheelset?  Di2 worries me for adventuring use.  I can rebuild an Ultegra group road-side, but if an electronic group just stopped shifting, I have no idea what I'd do.  I'd be left riding a singlespeed.

Of course I checked out Trek's Domane.  For the build we are discussing you need to shop the 6-series; Domane 6.2 disc compares with the bikes listed above.  In all but price.  Trek has spent an additional couple of thousand in marketing and sponsorships, and the company bills that to you.  Retail price $5200 and change.

And what got me started on this search was Specialized with its Diverge.

The comparable offerings in the Diverge line are the Comp Carbon and the Expert Carbon, priced at $3500 and $4000 respectively.  Both have hydraulic disc brakes and clear enormous tires.  The Comp. build is S-105 based with a factory branded crankset and the Expert build is Ultegra based with a FSA carbon crankset.  Both come with the extraordinary Cobble Gobbler seatpost.  Both have through axles for the wheels.  Worth considering, but the price is maybe $750 greater than what I am seeing elsewhere.

Specialized's Roubaix is a few hundred cheaper at the same build qualities.  Tire clearance is much less.  But it is an option.


I very nearly bought this bike from GT, which checks every box and does so at least a few hundred below any competitors.  Looking for a well built carbon frame that no reviewer has said a single negative thing about?  Consider the GT Grade Carbon Ultegra.  If you access Backcountry.com through Active Junky (offering 11% back) you can bring this home for less than $3000 net.

I did not pull the trigger in the end, preferring to go with titanium for the first time in my life.  Not sure I made the right call.  This is a beautifully built bike with the advantage of lower weight that only carbon offers.

I also spent a fair chunk of time deciding whether I could talk myself into something less expensive, made from steel or aluminum or spec'd with Shimano 105 or Sram Rival.  I concluded I could not.  But there are some nice bikes with those descriptions.

This aluminum version of the Specialized Diverge is what really got me salivating on these bikes.  This is a nice build.  But it is aluminum and S-105, two things I swore off, and certainly would not buy at the $2700 price point.
The Salsa I am buying is available in steel with lower dollar components for $1299 from Cycle Quest.  Good looking bike.  And for my purposes almost certainly fine.  But I was looking for titanium.

Surly has a long list of options.  If you don't mind a 23-lb. bike, Surly is your first call.  That brand has a version of everything that is interesting.

The Salsa Warbird, $3500 for the new carbon version, can be found much closer to $1500 in an aluminum frame.  Looks nice, even very nice.  With this out there, the Specialized Comp Smartweld is a foolish choice. 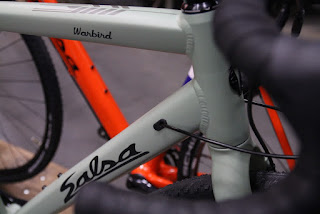 Novara has an aluminum-framed Strada with mechanical discs for $1200.

JensonUSA has lower-spec. offerings from Orbea and Diamondback worth considering.

The London Road from PlanetX is a good-looking low-dollar choice.  You can get the frameset for $300 or a Rival build for not much over $1000.  This bike is incredibly well conceived -- fender mounts, rack mounts, aluminum frame and carbon fork, frameset drilled for caliper brakes or disc brakes.  But for one problem, this is my first choice from the lower-dollar market.  The problem?  Planet-X has not figured out the shipping issue yet; it costs $200 to get a bike to the US from their England distribution centers. 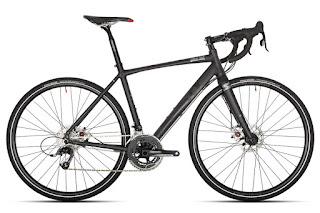 Having found Merlin, it has become possible to build my own bike for less than the manufacturer's build, even when that is on sale.  The Ultegra 6800 group with Shimano 785 (top spec) hydraulic discs is available for a modest $804 and Merlin ships from the UK to the US for free.
If you can find a frame and wheels to go with . . .

Merlin sells the Kinesis Tripster ATR, with its ATR technology (Adventure.  Tour.  Race.), a titanium frameset with carbon fork and disc brake mounts, for $1750 or so. 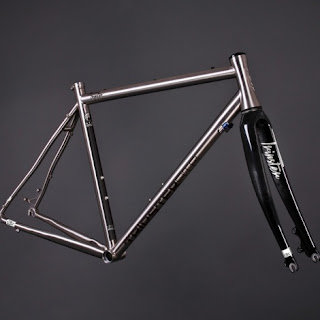 The hypothetical build is a pretty bike. 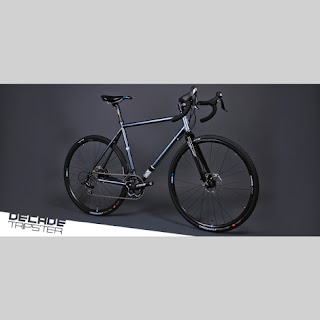 Add in a finishing kit including tires, seatpost, saddle, and bars, and this comes to right around $3000 for an Ultegra hydraulic brake titanium bike.  Of course, I would have to build it myself, with all the chances for screw-ups that entails.

Another option is to find the frameset somewhere else.  Habanero for a custom build?  $2000 for the Salsa Warbird carbon frameset?  Look for a deal on a Litespeed or Lynskey frameset? (They are out there if you look.)  Yes, it is possible, but I doubt you can build a dream bike for under $2500, and $3000+ is more realistic when you consider inevitable missteps.

Have you or could you tackle the laidback seatpost phenomenon? Seems seat tube angles are relaxing a bit over time, see many more 73 and 72 degrees now, yet the laidbacks are nearly everywhere. I have about a 39 inch x-seam and I constantly find myself too far back on the pedals unless I slam the rails all the way forward on a laidback post (the 25 mm offset type).

When I hop on a bike with more of a cruiser saddle, then I can see the use of a laidback as the thighs can't quite extend down as much and I have to maintain a shallower perch. A friend runs laidback and shorter stem because he feels like he gets more power that way but I'm in no way certain or sold on that idea. All I get are sore knees if I'm a half to three quarter inch behind the pedals.

Yes, it is odd, isn't it? I am accustomed to riding straight posts for just the reason you mention, although your inseam bests mine by a fair bit. But the post I'm riding currently -- the extraordinary Specialized Cobble Gobbler -- is a 25mm setback. So it's a matter of constant adjustment. All the more weird if one, like I (and maybe you based on your comment) come from a background riding super steep bikes like the time trial builds.

If I had to choose to say one thing, it is that I don't consider the stock seatpost to be part of the marriage at all. The annoying result is a box in the basement full of old seatposts that I've replaced.

The alternative, of course, is a custom build with a steeper tube. One can go with steel from a number of manufacturers, Gunnar being my personal favorite for no particular reason but nostalgia, or titanium for a huge bit more. But a $50 straight seatpost is probably a wiser answer.