I traveled to Oregon this summer for the Portland to Glacier 1000K brevet, put on by the Oregon Randonneurs.  I joined Sam at his home just out of Portland and Mom flew in to support.

Portland to Somewhere on Highway 14, Washington

We two and 9 others left the McMenamins in Troutdale at 5 am last Friday morning.


How'd that ride go, you ask?  Let me just quote RBA Susan on that one:

I really appreciate the effort that you all put in.  It takes a lot just to even start such an event. There are usually things to learn about yourself physically (maybe)  and mentally (certainly) with this kind of event. One thing I think riders forget, or don't realize, is that it is impossible to maintain your "normal" speed in such conditions. So much of the what the body is doing is diverting blood to the skin to keep you cool. So you have less for digestion and for your legs. You can only hope for tailwinds and downhills.

The forecast was unrelenting and I'm sure you all weighed that into your final decision.

I appreciate that riders made decisions for themselves, and I hope you are happy with your decision. You should be. No volunteer and no organizer wants to make those choices for you."


(Excerpted from the end of ride e-mail.)  We had a lovely jaunt from Troutdale on Highway 30, then a bike trail, comprising the Columbia River Scenic Byway.  While the lovely ride continues to The Dalles, we crossed the river at Cascade Locks into Stevenson, Washington, and Highway 14.

The 33 miles from Troutdale to Cascade Locks and across the Columbia River on the Bridge of the Gods was marvelous and made the trip worth it even if we stopped there.  Which is good, because we didn't go much further.


From Stevenson we continued 35 more miles to Lyle, Washington, on Highway 14.  The highway follows the Columbia River past a few major dams with desert hills to the north (our left) and the river to the south.  Things were heating up but for this stretch not unreasonable.


By Lyle at Mile 68 it was downright hot.  Here is us preparing to leave, with the next control -- and next opportunity to stop -- 60 miles down the road in Roosevelt. By Roosevelt at mile 128, things were looking bleak.  Air temperatures were 105 or above and the heat radiating off the blacktop was unbearable.  There was literally no shade to be found.  Our Camelbacks mercifully kept our water cool, but when we reached Roosevelt my three-liter water pouch, refilled with a road-side assist by ride organizer Greg a mere 30-miles back, was empty.  And I was as depleted as my Camelback.


So much so that as this next photo shows, Sam continued on from Roosevelt riding solo. 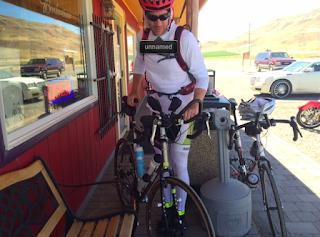 Sam joined me in calling it a ride twenty miles later.   Others fell in the same stretch of road, with three riders making meaningful qualifying progress beyond Roosevelt.  A tandem team abandoned the ride but continued on in "touring mode" at their own pace, likely finishing the route well off of official schedule.  Two riders, exceedingly well supported but outside the usual randonneuring rules, finished the 400K first day and started the next before calling it quits.

Jaunt on the Coast

We spent Saturday recovering and drove with Mom to Tillamook, Oregon, early Sunday morning.  Mom attended Mass and we headed out to the coast for roads that comprise the middle miles in the Oregon Randonneurs yearly "3-Capes" 300K brevet.  Far from our Friday experience, we were actually chilly, with moist air, occasional sprinkles, winds, and 59-degree temperatures.


The ride starts north, following the road along the shore of Tillamook Bay toward Cape Meares.  From there you head south along the ocean past the three capes -- Meares, Lookout, and Kiwanda, finally descending into Pacific City. 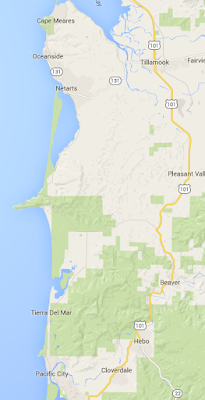 Reaching Cape Meares required us to traverse a closed section of road where settling had occurred.  When biking, closed roads mean no cars, and are usually a joy rather than a curse.  This was no different.  Everybody should ride the 10 miles of Bayshore Drive from Cape Meares to the lighthouse before it reopens.


Here is Sam at the first closure.  No indication that they plan to fix and reopen the road any time soon.  One hopes it becomes a permanent bike trail! 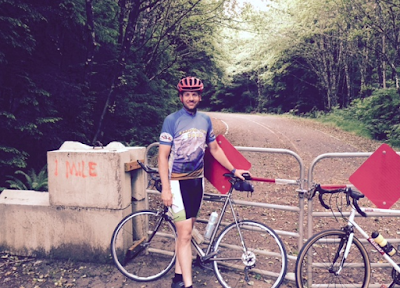 The road winds along some classic Oregon coastal scenery.  This vista, or one like it, appears perhaps 100 times between Pacific City and Astoria. 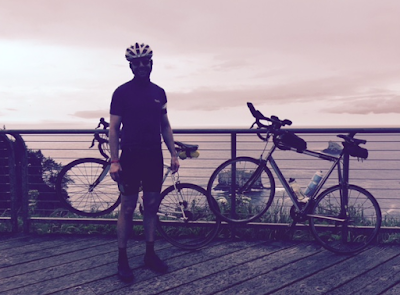 The road reopened not far south of here.  We stopped for a picture at the Cape Meares lighthouse. 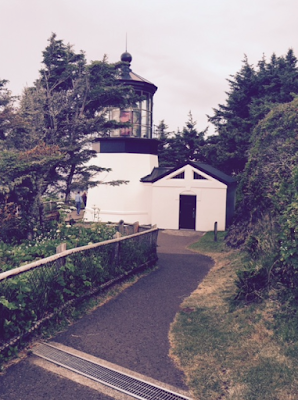 And then we rolled on with the camera securely in a pocket, past the two more southerly capes and into Pacific City.  The road is coastal but hilly.  On one descent we crossed through a stretch of sand dunes, making for a lovely stark image.


In the cool damp weather, tourist crowds were minimal.  I understand the dunes are a popular spot for off-road vehicles on the wrong day.  Today was the right day.


Mom joined us in Pacific City.  We lunched at BJ's Burgers and Tacos, ranked by TripAdvisor as the second best restaurant in Pacific City.  After a double burger with guacamole and an excellent $3.50 microbrew, I do not dispute that ranking.  Sam and I had considered riding over the mountains back toward Portland, but with two beef patties and a beer in the belly, we were all too pleased to load the bikes on the car.


Must . . . come . . . back . . . for the Nestucca River Road.  It ascends the Coast Range for perhaps 30 miles of mostly beautiful pavement, tree tunnels, and shallow grades, with just enough dirt near the top to prevent the road's becoming a real thoroughfare.


The eastern side of the range is not nearly as lovely, but we still regretted missing the descent.  Were we mountain bikers, we would have let Mom drive down the hill while we coasted, but we could not stomach the shame.  Fortunately, by the time we reached Carlton our lethargy had worn off.

In Carlton we parked at a Post Office where Sam has slept in the past and remounted the bikes.  North on 47 through Yamhill and toward Gaston and Forest Grove, but at some point I asked "is that the hill I rode in the Hagg Lake Triathlon?" -- which Sam interpreted as meaning "I'd like to climb a really hard hill."


And we did.  Whatever we climbed approached 20% and stayed that way for a solid mile, reminiscent of the grade above the Wintergreen Ski Resort climbing to the Blue Ridge Parkway in southern Virginia.  But unlike in Virginia, from the top we descended, down, down, a hill on which Sam achieved the Strava bronze medal. All I remember was feeling as if I could not hold a tuck any longer when I saw a sign reading "8% grade next 1.3 miles."  That stretch may have taken me 2 minutes.  At the bottom Sam was rested and relaxed; for all I could tell he had already ordered and finished a celebratory beer.


We rolled into the garage late Sunday afternoon, all smiles and sweat after two distinct rides on what should have been the brutal third day of our 1000K.


There is more riding to report from this week, but that is for another post.