Sam and regular commenter Damon provided great input in the comments.  The "how hard is it" spreadsheet exists in its current state at this link (Google doc.)  Anybody can comment in its current state.  If instead you think it would be more efficient to do so, ask me for editing permission.

My theory on difficulty:  distance is the primary challenge; climbing is the secondary challenge; temperature delta is the third challenge; weather is fourth; elevation delta is fifth.

1.  Distance:  the first one is obvious.  I think distance becomes harder in stages -- thus, 544 (Adirondack) is qualitatively harder than 384 (Fireweed), but only slightly harder than 508 (Furnace Creek).  How distance is factored in needs to be determined.

2.  Climbing:  again, obvious. In order not to double-count, climbing must be factored on a feet-per-mile basis.

3.  Temperature Delta:  my theory goes that riding at 100 degrees is hard as is riding at 30 degrees.  But either can be trained and planned for.  Wild temperature swings are much more difficult.  A route with daytime lowland highs of 100 degrees plus and nightime montain lows of 30 degrees would be qualitatively harder than a comparable ride with fair consistency at either end of the spectrum.

4.  Weather:  here I am seeking data on wind and rain.  Wind is probably worse, but I assume any serious weather event just sucks.  Tailwinds do not make up for headwinds, so unless a route always enjoys tailwinds I assume any weather is a difficulty.

5.  Elevation Delta:  in an effort to quantify hard climbing versus easy climbing, I am looking for data on elevation changes.  That should go a ways toward separating out the rollers (easy) from the passes (hard).

I also removed the rides that (under my subjective assessment) have not yet achieved certain indicia of acceptance.  Regretfully it meant dumping the two South Dakota events, each of which I'd like to try.  I did leave the Naked Challenger because it looks professionally promoted.

I've been surfing the various realistic ultracycling events (i.e., excluding the cross-country or around-country (if Europe) races) and thought I'd compile a short list of elevation profiles in an early attempt at quantifying the objective difficulties of these events.

Much more to study to accomplish this task.  I'm intrigued, though, at the results of this first pass.  Want to make RAAM look like a cake-walk?  Try the Naked-branded races in British Columbia going online this August!  (I included the shortest of the three.)  Interested in massive feet-per-mile in a ~36-hour event?  Go first to South Dakota, then Oregon, Alaska, and New York.  The notorious Furnace Creek 508 rolls in an astounding fifth in US-based weekend-long ultras.

First, brief notes on my selection criteria.  The events chosen are: 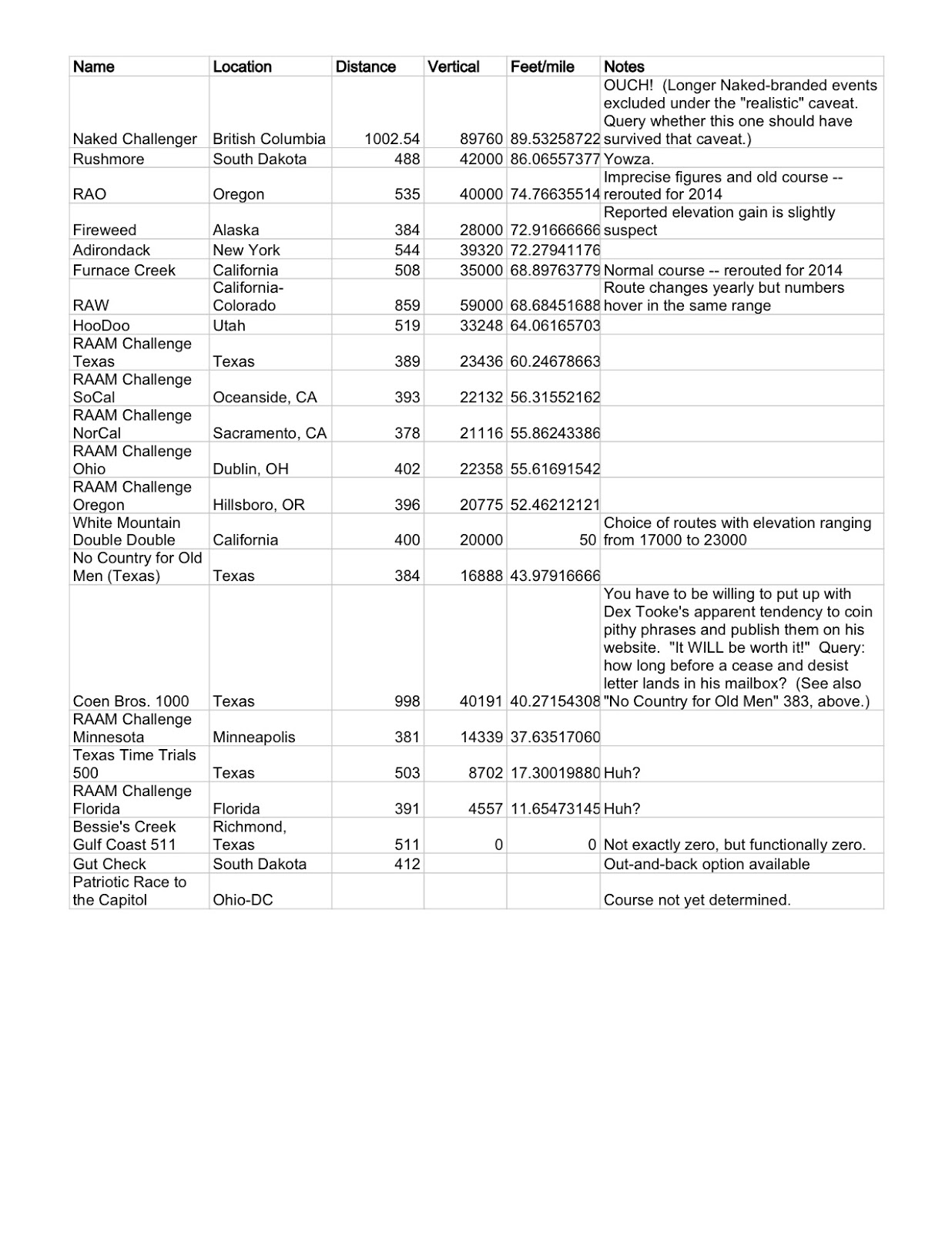 Nice, and interesting, list. A few comments in no particular order.

I'm surprised at the vertical footage of Fireweed. I guess the rollers just add up. Not clear to me that this counts as "real" elevation gain though.

Who knew it was possible to have only 4500 feet of elevation gain over 400 miles. You'd probably get more gain than that riding 400 miles on a quarter mile running track.

One thing this list highlights is that elevation gain is only one challenge to overcome. Heat, weather, etc... all are equally relevant. Though of course those are variable and harder to quantify.

In my opinion the Rushmore ride wins all the style points. But I can't tell if it's a "real" event yet, versus a few acquaintances getting together for a friendly bike ride. Check out the 2013 results: http://www.rushmorecycling.com/#!2013-results . Winner is a guy named Bonk. That's awesome.

The Naked series is interesting. They appear to be non-competitive, almost touring style events. Anyone who finishes a 1200 in 90 hours could probably complete the 1600KM course with an "elite" time (and someone who can ride a fast 1200 could beat the "elite" cutoff by well over a day, maybe two).

Problem with Quadzilla is that it is hard to put a finger on it, including even finding an up-to-date website. The map and elevation profile that does exist suggests 402 miles. Recent Quadzillas are being run as 4x200K for 500 miles total, but not the sort of weekend of no sleep that I set out to target with this list.

One rando club newsletter (http://www.glrrando.org/newsletters/GLR07Nov.pdf) describes Quadzilla 2007 as having 28,000 feet of elevation gain, for a 70'/mile average -- right in the hunt with the more serious on my list.

Having recently ridden in the Fireweed region, I can't imagine any 400-miler would actually be all that hilly. There are some climbs, but there's also an awful lot of flat unless you're just looping back and forth across a couple of mountain ranges.

The rides in B.C. sound outstanding. I just wish they were more conventional events. I could imagine doing a 1,000 mile race, but I'd have real reservations about doing one completely unsupported. (I guess you could say 1200k rides are unsupported, but in Alaska, I never felt like help was too far away if push came to shove.)

Interesting point about Quadzilla. I guess a criteria for the list could be established event with predictable course. That probably rules out Rushmore (and maybe the Naked series..)

Really I suppose in that distance the only 'established' events are RAW, FC, RAO, Hoodoo (barely), Adirondack, TTT, Fireweed, and the RAAM Challenges (most established solely by association).

The Naked races seem more akin to a 1200K than a race, and thus probably don't belong on this list unless 1200s/600s are also included. Of course that opens up the field substantially.

How soft or hard do you guys think the ADK 540 course record is? 32 hours flat, set by John Nobile in 2012. I'm still considering what I'd like to do this fall, and the possibility of driving to ADK makes it at least a little tempting. (I'm awaiting word from Furnace Creek on what their plan is.) On the downside, ADK 540 would eliminate the possibility of the DC Rand 1000k, and there's also the issue of there being only a handful of people toeing the line each year.

I suppose one mildly instructive data point is that, in the 2012 Saratoga 12-hour race, I finished 2 miles ahead of Nobile. Based on that fact, at least, the ADK record seems reachable, although it's obviously a somewhat different ballgame.

Similar roads, and similar feet/mile, to the IMLP bike course, which you know well. I just think 540 miles is a really freaking long ways. Re: the record, ask yourself whether you could have put down 103 more miles in 9 hours starting at the time you dismounted in Sebring!

Interesting question. The FC record is just over 27 hours. It seems unlikely that will be improved on substantially. ADK is 32 miles further, I guess, and by Max' reckoning another 4K feet climbing. That would seem to make 30 hours a roughly comparable time.

Based on that complete WAG, I'd say 32 hours isn't 'soft', but nor is it unapproachable. I imagine plenty of former FC winners could go under 30.

It may be that ultracycling races will go through a period of WTC-like consolidation following the revocation of RAAM Qualifier status from some of the smaller races. That might not be such a bad thing: fewer races, but the ones that take place will seem like something more than a training ride in the wilderness. Sebring was nice in that regard. I'm always vaguely surprised that anyone is willing to go through the trouble of hosing a race for 4 people, 3 of whom will DNF.

Exhibit A: the Alaska Randonneurs. Sam and I first rode that 600K in '09; 7 starters, 4 finishers. We went back in '12; 4 starters, 3 finishers. Because of the remoteness, the support there is roughly comparable to a supported ride.

On the other hand, most of these seem to be put on by people who just love to be around bikes and bikers. Even the big one -- Adventure Corps is basically Chris Kostman and a number of people who want to absorb some of his mojo -- but certainly the smaller ones. Nobody makes a living doing this.

A question (if the comment thread is not yet played out): how to advance the objective difficulty analysis further? Finishing times won't do because the law of large numbers will not help us. I'd like to include temperature measures somehow; wind/weather measures somehow; type of climbing somehow; and maybe even a "remoteness multiplier" on the theory that it is uniquely hard to face 200 miles of desert highway before you encounter the next truck stop. Any insights?

I think "climbing difficulty" data will be challenging to come by. You'd want some measure of variance, which you can't extrapolate from climbing per mile. But it definitely matters. In some ways I think a perfectly flat TT like Sebring may be a little more challenging than one with lightly rolling hills: when you get tired, it's easier to power up a hill for a bit before rolling down the other side. The "no rest" motif gets old.

One other (albeit subjective) metric is time of year. Early-season races are tough not only because you're less trained, but also because cold air has higher density and makes everything harder. See, e.g., the inevitably miserable DC Rand 200ks in March. Due to the "miles in the legs" phenomenon, I'd expect a September race to be easier than an April or May race.

The 'difficulty' rating has been attempted time and time again, and failed. In part because everyone is so unique. Climbs impact a heavier rider much more than they impact a lighter rider. Some people ride faster in the heat, some when it's cool. Wind might have the most consistent impact, but is also the least predictable.

As Damon mentioned, even the type of climbing has an impact.

And of course that doesn't even start to talk about physiological differences between riders.

But this seems ultimately like a math problem. True, there are lots of rider dependent variables. So create control rides that let you solve for those variables per rider. Then, given a particular ride's characteristics and your rider profile, you can come up with a personal 'difficulty' rating.


Of course realistically you might have to add a few other factors in there, along with adjusting the weights...