As usual, I'm discovering internet stuff after it's past its prime, and recently that's been Strava. I've long been annoyed that Garmin Connect really hasn't improved at all over the last 7 years, aside from a minor facelift during the MotionBased to Connect conversion. Strava seems to be a nice super-set of Garmin Connect features. And it's the first example I've seen of integrating "social" features into a website without being totally annoying or over-bearing.

So of course the first thing to do was to import all my old Garmin Connect activities. One of the really nice features of Strava is that it makes it really easy to define "segments" that you ride often, and use them to measure performance improvements. I used to do this with Garmin Connect by eye-balling the graphs, and making my own spreadsheets. Strava is a huge improvement in this regard.

My first attempt at this was the upper section of Pumpkin Ridge, a small local hill. The upper portion (which I picked because there are two lower portions, so excluding those gives me more data) is about 700 feet over 4.9 miles.

Looking at the data is revealing, for a couple reasons. 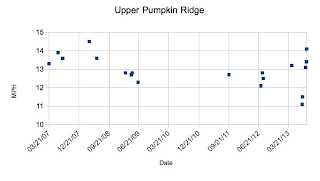 First, there's a big gap of about 2 years where I didn't ride it at all. Which means I really didn't ride at all. There's also a big drop from 2007/2008 to 2009, and then another big drop in 2013. It is, however, gratifying that with a solid month of riding under my belt, my times are once again reaching where they used to be.

The other route I ride often is a round trip from North Plains to Dairy Creek, a 20 mile out-and-back with around 600 feet of elevation gain (and loss!).

Those results are looking a little less cheery 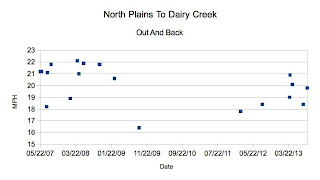 Though in fairness I haven't really done an 'all out' effort on this route in a while. Regardless, the ease of comparing segments across rides is awesome.

The "social" aspect (I hate that word) is pretty cool, though it could also be depressing. Generally I've found myself right near the bottom 50% on climbs of any note (I suppose I could claim to be right near the top 50%!) with just a couple forays into the top 30%. On descents, it's quite the opposite -- I'm generally in the top 5 out of hundreds of riders, and there are a couple notable drops where I've got a considerable lead on everyone else. Girth giveth and it taketh away.

The mobile apps are pretty awesome. More than once I've forgotten to bring my garmin along, and used my cellphone instead. The results are, as far as I can tell, just as good as if I'd used a proper GPS.

For now I'm uploading to both Connect and Strava, because with the new web uploaders, there's really no effort involved. But my guess is that I'll soon be using Strava only.
Posted by sam

If you search Google, you'll run across several stories from the last few years involving lawsuits in which riders descend at unfathomable speeds in order to try to get the fastest descent on Strava, only to run into someone and damage them badly. The thrust of the story is that Strava can be something of a threat to public health, in addition to a threat to one's social networks.

When I finally uploaded my BWR data to Strava, I was amused to see that it estimated my average wattage to be in the 130s. So much for heroism.

Yeah I'm torn on the downhill/Strava thing. On the one hand, I can see where they're coming from. On the other hand, I'm bitter that people complain about of the one thing I'm good at. I guess we'll have to wait for someone to have a heart attack from going too hard uphill trying to get KOM.

And yes, it is a bit humbling to see just how modest the power output is at brevet speeds :)

Strava: do I understand that as I upload my routes, it will automatically pick segments and rank me according to that segment? Thus, I will be graded on my Sugerloaf climb, my Sugarloaf descent, and my Sugarloaf up-and-down, all three?

Is there a Strava route yet for climbing Jackson Mountain Road? Westernport Wall? Mount Baker? (Obviously yes on the second and third.)

Yes that's correct. It has some algorithms for automatically generating segments for climbs of any note (it also classifies them).

For popular climbs, there are surely hundreds or thousands of people among whom you'll be ranked (you can limit the group by age, weight, gender, etc.., or just your own results). For less popular climbs there may be only a handful or no other riders.

You can also create your own segments for routes that you ride often. You can make them private.

I'm not sure how many of these are 'premium' features (I forget how much it was, $50 or so per year maybe?).

Chasing other riders is a fool's game unless you're a cat-1. But trying to find a couple segments per ride where I can beat my own previous times is a nice motivator.

Running Strava must be less well established. There are myriad routes around Indianapolis, at least, on which I could set the lead time.

None of this is as good, of course, as is Jahvahaah. http://teamjva.com/