UPDATE with a few notes about the first ride:

I couldn't sleep, so I read a few chapters of a recent Le Carre novel waiting for a little bit of light and headed out for 30 miles up the Monon Trail and out 56th Avenue here in Indianapolis.  This was the first ride on the newly built F100.  (It turned out, by the way, that I was a little overeager on getting out the door.  I rode a good 45 minutes in too-dark-to-be-riding-without-lights conditions.  Thankfully I had a taillight to alert cars, but dodging bike commuters on the Monon was a little dicey.)

Summary: this is a really nice riding frame.  The build needs a slight bit of refining to be perfect.

First realization:  the fact that the tires fit when first mounted does not mean they will fit when filled to pressure.  The front spins fine at my usual pressure (80 psi for balloons like these).  The rear does not spin at 90 psi, but a short deflating burst -- maybe down to 85 -- was sufficient to get it moving.  Unfortunately, that does not bode well when the wheels lose trueness.

The fit is just slightly off for me. I have a 110 mm stem and could use a 120.  It's comfortable but a little compressed for my liking.  I will move the saddle back and hope that accomplishes the goal.

I failed to compress the headset bearings into the head-tube, so there's a little more play and rattling there than would be ideal.  Lacking the proper tool, I hope the shop down the street will do that for not too much money.

The pedals -- Keo 2 Max rather than my normal Keo Classics -- work fine, with a caveat:  they have this neat feature that they stay level when you unclip.  That's great unless you are accustomed to flipping them upright with your toe on the way to clipping in, as I am.  I found myself flipping them upside-down!

This is officially my lightest bike, based on the ever-reliable pick it up and see how it feels test.  The carbon P2 loses out likely as a result of the excessive weight in the front-end from the bar system.  The weight is noticeable on the constant starts from a stop one does riding the Monon in rush hour.  Stop, wait for cars, sprint back up to speed, and stop again.  It's a nice-feeling bike out of the saddle, with about the right amount of flex characteristics to be comfortable and the right stiffness to feel snappy.

It is a very comfortable ride.  Can't say whether that's the frame, the all-carbon fork, or just the saddle and fat tires.  But it's on par with the Gunnar in terms of the apparent all-day comfort.  I must say that I'm very eager to find out!

Neuvation has been in a sell-off on the old framesets so I ordered a F100 for $250 ($327 shipped).  This is Neuvation's original aluminum frame that for years has been discussed as a black-label Cervelo Soloist; the closest John Neugent will get is to say (paraphrase) "this is built in a factory to which a top frame-maker sent engineers to perfect the design and manufacture process for the frame".  But the geometry is spot on and the semi-aero tubing looks about right -- and, in contrast with the over-branded Cervelo rides, this frame is an elegant, sleek, discreetly branded black number.  I'm also happy with a larger frame.  Less stuff sticking out to make it fit my long legs.  Neuvation included its full carbon fork with the purchase.

I was torn as to what to do with it -- build cheap and sell; build cheap and ride hard; build cheap and keep -- note that building anything but cheap was never an option! -- but one day I received my 28c Schwalbe Ultremo ZXs from Merlin, mounted them on the Hed Belgium rims, and put them on the bike on a whim.  And it was beautiful.  (Or so I thought.)


At about that same time Merlin had a fire sale on Shimano 105 groupsets, so I bought this one for $417 shipped.  I'm an Ultegra snob and have been in danger of becoming a Dura-Ace snob, so it was gratifying to see that this was as pretty a set as any I've ridden.


I've been wanting to build with some accent colors for a while.  I had always envisioned I'd do so on the Gunnar or on a new titanium frame, but this was the one I was building.  Though I'm usually an afficionado of blue accents, for some reason red seemed right to me.

I found chainring bolts (A2Z brand), a seatpost clamp (Hope -- coloring is slightly off, but it works); titanium skewers (A2Z again), bottle cage bolts (not sure, but A2Z is a good guess) and a top-cap (A2Z).  I had the red spacers from years back.  Had I my druthers I'd be using a red headset and external bearings, but those are a tad dear for plain baubles.

The accent also works because it matches the coloration on the Ultremos.  Of course, now I'm locked into that particular brand of rubber, but one could choose worse.
I picked up the mid-range WTB Rocket V saddle -- Comp or Pro, I'm not sure which.  It's not the lightest number, but at 260 grams of proven comfort for $40, I'm not turning up my nose.  I had installed TRP carbon brake calipers on a vain whim, but they didn't clear the tires.  (Recall that the tires are my primary reason for finishing this bike!)
Red bar tape would have been too much and it didn't quite match anyway.  To my view the only obvious change going forward is to find red cable ends somewhere. I'm torn as to whether I mount stubby aero-bars.  Probably not.

On order is a Zefal HPZ-2 frame pump.  That should be the right size for a left seat-stay mount.  Then I have some tuning to do before taking it to the road.  My hope is that this serves nicely on some fall-time 200Ks.  Here's the view from the cockpit. 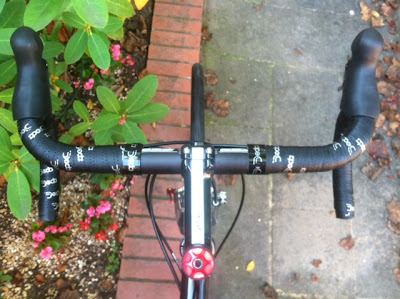 And from further back in the pace-line. 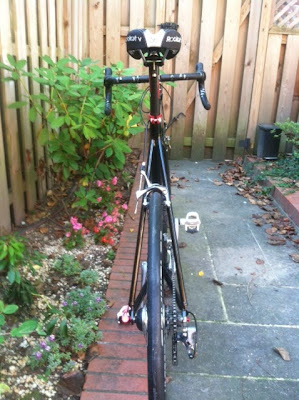 Looks like a great build, I'll be curious what you think of how it rides. Of course it is revealing to see Neugent's price on his FC100 105 bike.. Makes it clear that even with bargain basement prices on parts, one still can't beat the bargain basement pricing of a whole bike. Though the building is always half the fun. Putting Ultegra or DA on a $250 neuvation frame would seem unwise. 105 is a perfect match.

The accent bits from the pictures look nice. Are the chainring bolts Ti or Al? I've tried to go Al several times, and each time ended up breaking bolts. Probably due to not using a torque wrench, but regardless, have since gone back to steel. Allegedly, it is real.

The ultremos are a great looking tire. I had to move my Ultremo 28Cs from my Habanero to the cross-check, which has more clearance. While they fit on the Habanero as long as all the stars aligned, when my front wheel got slightly untrue they started to rub on the fork. Back to Grand Bois 26s on that bike I suppose.

All in all it looks like a great build for not too much money. Recall that my first Steamroller fixie came about because you gave me a headset. I suppose it's not too unreasonable that this build came about as a result of a set of tires.

Aluminum. Lightweight aluminum, no less. It may help the ones I got were for a triple, so I used the backing from the original crankset. Thus, only half the bolt is knock-off aluminum.

I'm tempted to do a similar accent on the Gunnar now. Probably blue. It's about time for a new headset, so the blue Hope headset for $93 wouldn't be wasted. Probably skip messing around with the chainrings on the new Ultegra crankset on that bike, though.

It's a very nice looking ride! I'm not very knowledgeable about the "spec every bolt" world, and I've never built up a bike completely, so it's educational.

One question: you've mentioned a number of times that Neuvation frames are built in the same factory as those of other, more bling-tastic brands. I think you also mentioned that pretty much all bikes are built in one of four factories in Asia. (Trek's high-end bikes, for one, are an exception, as the carbon they use is actually illegal to send abroad, or something along those lines.)

Without getting into the worth of Neuvation bikes -- they seem to be a good deal -- I wonder whether it matters if they're made in the same place as Pinarellos or whatnot. It's quite a stretch to go from that statement to the proposition that they're actually the same bike with a different sticker. Presumably there are a few factories that have the requisite machinery and expertise to follow the carbon layup instructions provided by each manufacturer with whom they do business. It might (or might not) therefore be right that they're built according to the same quality standards. But given that carbon orientation and processes are the subject of huge amounts of research and design dollars and drive the ride characteristics, it's not obvious why it matters where a frame is made. Either way, it is what it is, isn't it?

I think this is an excellent point. Neugent clearly uses his "made in the same factory as..." as a marketing ploy, with an attendant *wink wink*.

Of course, Dell laptops and Macbooks are made in the same Foxconn factory, but we shouldn't assume they're equal.

It is also entirely plausible that these frames are made to the same specs as [insert name brand bike here], but that doesn't mean that it's as good as said unnamed bike.

These could be 'factory seconds'; a weld doesn't quite meet [high end brand]'s requirements, or they could be 'third shift specials', made to resemble the name brand but with lower quality materials. Or of course they could truly be equivalent in every way except the decals.

At the end of the day, my feeling is that marketing drivel aside, bike frames are a bunch of metal tubes welded together. They're the least interesting part of the entire bike, with the possible exception of the brake cables. Companies slap them with trademarks like "cross-hatched octo-threaded carbon composite", but ultimately the primary difference between a Trek and a Scattante is that the former has a (much) better paint job, doesn't sound like a reference to poop, and probably comes with a lifetime supply of rubber yellow bracelets.