Between being beaten silly while choking on water and suffering through your feet pounding tarmac, triathlon offers an opportunity to glide over ground as fast as your legs will push you and your steed will break wind.  I'm not a big triathlon cyclist -- only once to date (Great Illini, 2008) has my bike split been my most competitive of the three events -- but I do like an opportunity to hammer with impunity without regard to stoplights, cars, or the need to dismount for food or drink.

Yesterday I averaged 22.1 (22.4 if you believe the official results, but I think the course was ~3/4 mile short) over a modestly hilly -- very hilly by time trial standards -- 90K bike leg in the hills around Gilford, New Hampshire.  I am pretty sure I set a PR for the 40K as well, averaging around 22.7 to that point.  A better measure, from my perspective, is that I was right about 19' slower than one of the top American pro men on the same course on the same day.  That's definitely something I've never done before.

A side note:  it is more than perverse that I'm having modest success at the one thing I have committed to put to the side for the near future -- in favor of other types of events in which I have not been enjoying success.

Here's what I'm trying to sort out:  for the second time this year (and I hope not the last!) my riding in a triathlon has been well beyond my expectations.  What is working for me this year?  Can I replicate it? 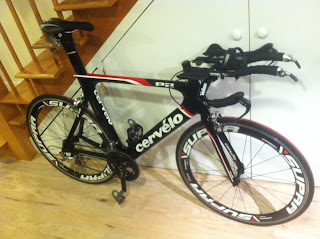 (1) the ride.  Once a top choice for pro triathletes racing Kona, my P2 is a pedestrian rig in today's world of uber-steeds.  The Ultegra groupset came on the Cervelo Dual that I bought in 2008.  I transferred it to the P2SL when the Dual developed a crack in a weld -- and transferred it to the new P2 frameset last August in Boulder.  Yes, that's a recently substituted Sram Rival crankset (170 mm), though finished with Red 52-36 chainrings.  The wheels are a low-budget item from Merlin Cycles, made by the Dutch manufacturer Sensa Bikes, which only cost me $650 shipped.  They are nicely spec'd with Sapim CX-Ray spokes.  I bought them precisely because their paint job matched the bike.  The tires are Vittoria Open Corsa CX IIs, also inexpensive at Merlin, but broadly acknowledged to be the fastest rolling clincher money can buy.  They are black and red and also match the bike.  Maybe this setup can bring $2000 if sold in its current configuration.   I  think the bike is pretty sweet, but nobody's going to accuse me of going crazy on the equipment front.

(2) the gearing.  For both of this year's races I have ridden 52-36 and 11-23.  Not terribly tall, but not exactly Mountains of Misery gearing.  One thing about tall gears: maybe you burn yourself up on a climb, maybe not, but it's impossible to go too slowly.  As it stands, I think I race this set of gears in Tahoe.

(3) the position.  My stem isn't slammed, but it's only raised a centimeter.  So I'm pretty low, but I'm also comfortable.  I'm certainly not going lower.  My elbow pads are wider than past practice.  It has opened up my chest and I think allows for better breathing.

(4) the fitness.  I have maybe 3-4 weeks this year in which I haven't ridden 100+ miles, and several in which I've eclipsed the century mark by a good ways.  A fair amount of that riding is intervals or hills.  It's gotta help.

(5) the nutrition.  I'm working toward a magic middle of enough liquid and enough calories. I used diluted EFS in one bottle and diluted Gatorade in the other, with caffeinated salt stick tablets dissolved in both.  Plenty of calories, plenty of caffeine, and just enough (not too much) water.

(6) the attitude.  I'm not the baddest long distance cyclist.  I'm probably not even in the top half of badness.  But I may well be in the top 10-20 baddest taking the start at any given mid-course triathlon.  So I don't need to wait until the run to prove myself anymore.
Posted by Max

For years it's been a slight mystery to me why you abuse me for the first half of every ultradistance ride we do, but your triathlon splits haven't matched up. I suspect it's largely attitudinal -- you've just been holding back on tri courses. The stiffer bike and better position doubtless help a little as well, but it's not only that.

One delightful side effect of riding 200-300 miles at a stretch on several occasions is that triathlons become almost trivial in terms of distance. If 56 miles seems like a huge distance, you're less likely to give it full gas than if it seems like the homestretch of an epic ride on which you're feeling unexpectedly spry.

Damon's comment is exactly why I've seldom understood the theory of training for an event's distance, rather than for a longer distance. I'm sure at the top end of any sport, being perfectly trained for *the distance* at which you're racing is preferable.

But for anyone else, the psychological benefits of knowing that you're riding "only" 56 miles, or "only" 112 miles, is huge. Not to mention that you're more in tune with what real fatigue is, so possibly better able to judge just how hard you can go.

Best part is that after 6 years and maybe 10 races I have finally ridden a bike split faster than Sam's split in his one go at the 1/2 iron distance!

Funny, I mis-remembered that race. Thought you beat my bike time, but we were pretty close on both the bike and swim. Too bad my run was at a 13:20 pace, or we could have made a race of it.

But yes, I did outrun you.