Eulogy For A Pair Of Shoes

My first pair of toe-squashers were of the cheap Performance variety. I blame Max, of course. When he drove his Cannondale cross-country to let me borrow it, he also passed along all of his cheap-skate wisdom. Chief among which was that one should never buy a brand name when there was a Performance alternative available. After a few months of flat-tires, out-of-true wheels, shorts that cause chaffing, and shoes that made my toes bleed I realized that his advice must have been a practical joke, getting back at me for being such a swell brother for a few decades. Jokes on him, though, I still have his Cannondale!

In truth this was my third pair of sandals; the first was an older Shimano sandal which I also loved. That was the previous 2-strap variety, but I eventually forgot them at a mountain-bike trailhead. The second was a pair of Lake sandals that simply sucked.

I don't know how many thousands of miles this pair has seen, but I'd guess in the neighborhood of 15,000 or so. They've been on countless brevets, centuries, and MTB rides. They've seen sun

accomplished club racers:
and even icebikers:

Rarely has an article of cycling clothing reached such heights of perfection. Mastered both form and function. The Shimano Sandal has transcended legend and become an icon. But it's time to replace them. On my first pair of Shimano sandals, the velcro failed and was replaced at least once. On these, nothing has failed, but they're falling apart nevertheless.


It's tough to replace something so simple, perfect, and obviously correct when we're surrounded by such overpriced mediocrity. Like trying to replace Friedman in a world of Krugmans. Tougher still because Shimano stopped making the SD-65!

So here they are. My replacement for the Shimano SD-65: 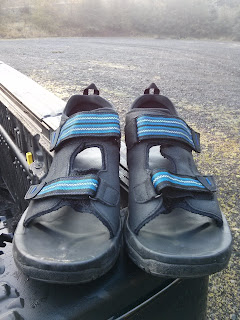 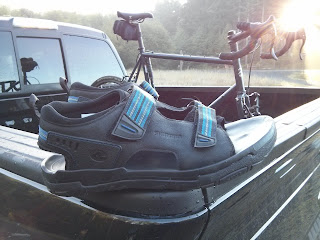 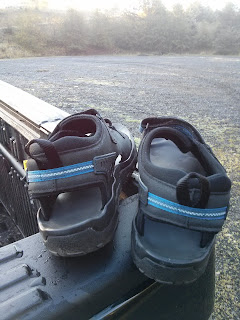 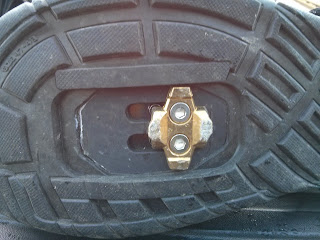 That's right, the Shimano SD-66! Shimano did the unthinkable: they added one to the model number, and removed one from the strap count.

Now truthfully I won't stop riding the SD-65s. I'm relegating them to MTB duty where a failure won't be catastrophic, and the additional foot coverage may be handy in encounters with rocks, trees, and small forest animals. But for the road they're mostly retired. It's been a good run.
Posted by sam

I think lost any cheapskate bona fides when he invested in full-body Rapha gear this summer. As a full-on Fred, I applaud the decision. Snobbery isn't going to perpetuate itself, after all.

I'd love to see that Rapha gear on his fixie Cervelo.

That would be the ultimate juxtaposition of hipster fashion.

Damon fails to mention my new Giro road shoes with real leather and carbon soles. Good post. We should spend more time at huffmanbicycleclub evaluating equipment that is too vile to touch or to muck out stables with. Next: paean to my personal toilet aka triathlon saddle.

BTW, get a better photo of that bike mount in the bed of the truck. I like the look of it from what I can see.