Eight years ago I bought a Kawasaki KLR650. At 200kg, that motorcycle was sufficiently beastly that they didn't bother to include pedals. I can only imagine the wattage needed to get over the Alpe d'Huez. The wheels back then were a comically small 21" up front and 17" in back, and the drivetrain had a mere 5 speeds. At least the handlebars were a forward-looking 810mm. 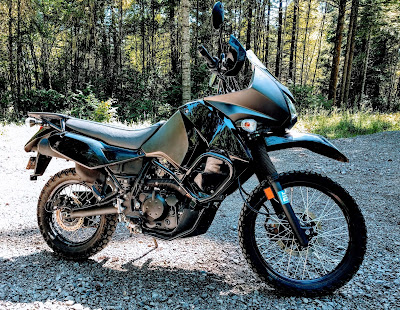 What a difference a decade makes! Today's motorcycles have shed quite a bit of weight and moved to more modern wheel standards. I recently picked up a Specialized Turbo Levo SL, coming in at about 19kg, and with modern touches such as 29" wheels and a 12-speed drivetrain!

Joking aside, why did I finally pick up an e-bike? There are a few reasons.
Honestly, I've always been a little e-bike curious. Depending on where you're riding, a lot of mountain biking can consist of spending an hour pedaling up a forest road, helmet hanging off your backpack, and drenched in sweat by the time you get to the start of the trail. Not for nothing that "shuttle days" are a popular occasion. For these rides, pedaling up isn't the point. It's a necessary evil. On a regular bike you'll be lucky to get 2 runs in before you're ready to quit. On an e-bike? Twice the runs is quite feasible.
But there's a second reason, or perhaps excuse. Since mid-October I've been nursing a couple annoying injuries caused by, of all things, some aggressive pickle-ball playing. First I strained, or partially tore, or something my achilles tendon. That took a couple weeks to get mostly better. Immediately afterward I strained, or partially tore, or something my calf muscle (same leg). That's had me sidelined for nearly a month now, and threatens to get aggravated whenever I walk too aggressively or try jogging. It'll heal, but it's going to take a few months to get better.
Interestingly I feel like road-biking won't bother me much. You seldom have sudden transitions between steady-state and powering up a 35% short muddy climb. But mountain biking and road biking are the same sport in name only; different muscles, different technique, and different failure modes. It's quite common on a muddy slope or switchback to jam a leg to the ground to avoid falling. Or to stand with your weight over the front wheel trying desperately to keep that wheel on the ground while not losing traction on the rear.
There's also a third reason, and I'm a bit embarrassed by this one. I'm just not in as good of shape as my riding buddies. There are a variety of reasons, but they're all excuses. At the end of the day, while they've been going out for 3-4 hour mountain bike rides a couple times every week, I haven't. Right now, I can't keep up.
So I opted to pick up an e-bike. And this is the one I chose is the Specialized Turbo Levo SL Comp.

E-bikes have mostly fallen into one camp thus far: Get as much power and battery life as possible, and try to keep the bike under 50 pounds or so. Specialized's other version of this bike, the Turbo Levo, max'es out at 565 Watts and 90 Nm torque of assist. You could literally sit on the seat and do nothing, and the bike has plenty of power to go up a hill briskly. While no KLR650, it's about the closest bike-trail-legal thing.
I really don't want that bike. Let me try again, I don't think I want that bike. Or I don't want to want that bike. OK, fine. I'd love to try one.
But for a bike that I own, I want one that is truly an assist rather than replacement for my output. Even when pedaling up the paved roads of Sandy Ridge to The Good Stuff, I want to be doing something. The Levo SL is a nod to that; it's motor puts out a max of 240W, and 35 Nm of torque. The battery is a commensurately smaller 320 Wh (though a 160 Wh extender can also be used). These changes, along with no doubt a less stout build result in an 8-pound weight savings. Oddly, Specialized doesn't seem to knock much off the price tag for including a lower-power motor and smaller battery, hmm I'm sure it takes a lot of technology to make lighter-weight electrons!
And I'll sheepishly admit; at least part of my preference for the Levo SL over, for example, the Levo is that the Levo looks more like a regular bike. The motor bump is much less pronounced, as is the downtube "battery bulge". Compare:

After I bought this bike I realized it's the first aluminum bike I've bought in quite some time. Among this model, the jump to a carbon frame would have been an extra $1000 for a modest weight savings. Not until you get into the S-Works, nearing or exceeding a 5-figure price tag, do you save an appreciable amount of weight, about 5 pounds. That well exceeds the "dollar per gram" guideline. There are certainly opportunities to save a couple pounds through some moderately priced upgrades. Maybe eventually.

When I first picked up the bike from the shop I took it for a quick test ride in the parking lot. It's a little surreal, pushing on the pedals a little and suddenly you're moving along quite briskly. I spent some time in my driveway playing around and started to get the hang of it.
Last night I headed out to some local trails for the first real ride. Conditions were, shall we say, muddy.
Getting used to the electric assist didn't take too long. I'm definitely a "masher" -- low cadence high torque. This isn't the pedaling style that electric bikes prefer. Or at least not this one. When you find yourself in the wrong gear crawling along at 20RPM, the assist never activated. But manage to shift to get into an easier gear and you'd immediately feel your power multipled
To its credit, the bike handled itself with aplomb. There were short steep climbs where normally one has to choose between keeping weight over the front wheel and getting more power to the rear, but having an extra hundred watts or so driving the rear wheel helped keep momentum up.
The bike has three assistance modes. Eco, Trail, and Turbo.You can customize each levels assist percent as well as its maximum output. The defaults are

My understanding is that, in ECO mode, the motor will contribute 35% of my power up to a maximum power of 240w * 35% = 84W. So if I am pedaling at 200W, the rider/motor system will put out 270W. If I am pedaling at 300W, the rider/motor system will put out 384W.
Extrapolating from that, on a longer ride at a relatively steady 200W, I could get assist for about 4.5 hours from the 320Wh battery. Or 50% longer if I added the extender. In Trail mode at max output I could only go for about 1.3 hours. Anecdotally I found the eco mode to be more than fine, but on the final climb back to the car I used Turbo just because.
There were a few weird experiences when riding this bike. I don't know if this applies to all. First, the transition from very minor assist to no assist feels a bit abrupt. Partly because you hear the transition as the motor cuts off, but you also feel it. And moreover because it's at least partially dependent on RPM, sometimes it cuts off when you actually still want assist.
Likewise the assist can feel abrupt when it turns on. For the same reasons as above but in reverse. Sometimes if you're in too high/easy of a gear, the motor will cut out during a dead-spot in your pedal stroke when you're not applying much power. Other times the motor will feel like it bogs down because your cadence is too slow. Shift a few gears higher/easier, and with no additional power output from the rider, the motor's power output increases substantially.
None of these are problems; I have every confidence that I'll get accustomed to the power delivery. I've had only one ride so far!
Otherwise the bike rides like a bike. I'll openly acknowledge that I rode like a pansy; I haven't been on a mountain bike in a couple months, my leg is pretty sore still, and the trails were super muddy. Our local trails have a blue/black that has some doubles, a couple off camber, as well as a couple small drops. Only on the last run down did I start to actually try getting both wheel off the ground and even then only on table-tops. No biggie, that wasn't the point. The bike handled it all fine.
With the power off the bike pedals and rides like any other, er, 40 pound bike. My Yeti SB5c is high 20s and does feel snappier. But the bike is not the limiting factor at this point. I did note that the motor lets you be a "sloppier" rider in some situations. Maintaining momentum isn't as critical when you regain speed a bit easier.

I'm happy with the purchase. Not ecstatic, but that's in part because it's a bitter pill to realize that you're slower than your friends. On the other hand, if it gets me out riding when I wouldn't otherwise, then it's unquestionably a win. I don't plan to retire the Yeti; as an extension of the SB66c before it, that's still my favorite bike ever.
This is probably in the second or third generation of high volume "e-MTBs". There's definitely still a lot of refinement yet to come, but for my money and for how I ride, the "modest assist" is the right compromise. I can definitely see the appeal of the more powerful/heavier models but those bikes would need to supplement another bike while the Levo SL could legitimately be a "single-bike quiver". (So why isn't it for me? I clearly don't believe in single-bike quivers). 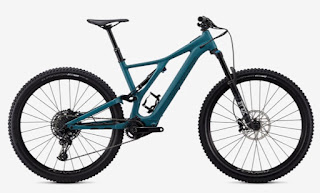