Regular readers of the blog will recall that, shortly after Max picked up his 3T Exploro, I did the same. Our timing was impeccable, as a month later 3T lowered the price of our bikes by $1000 and replaced them with a new version of the frame.

Max and I had a different opinion of the Exploro, with Max arguing:

This is the perfect one-bike quiver.

The 3T Exploro is not, for me, a one-bike quiver. But it does fill out the four-bike road quiver quite nicely.

One of my complaints was an obvious paint flaw. Both Max' and my frame had paint defects, mine most noticeable right around the seatpost. 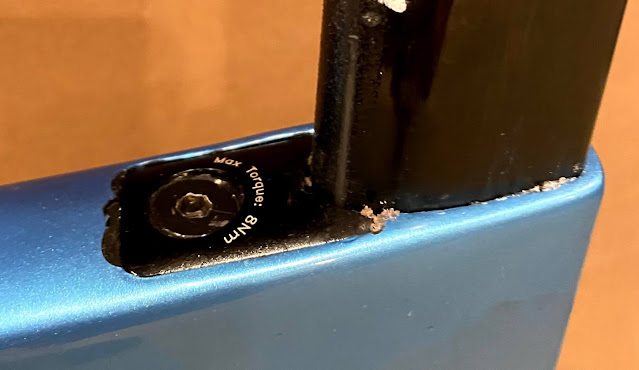 and Max' around the fork crown. Having paid a premium price for these bikes we decided to pursue a warranty claim. I'm not sure what we expected, I guess realistically I thought 3T would send us some touch-up paint, but instead they generously offered to replace the frames. Max already documented his experience swapping his Exploro Team frame for the lighter Exploro LTD, so now I guess it's my turn.

I don't remember if 3T offered or if I asked, but one way or another I got the new Exploro RaceMax frame in place of my previous Exploro Team. I did pay the difference in frame price, about $700 plus a few dollars for new brake mounting hardware. I got the new bike built up last week at a local shop.
For a reminder, here's the original 3T Exploro Team 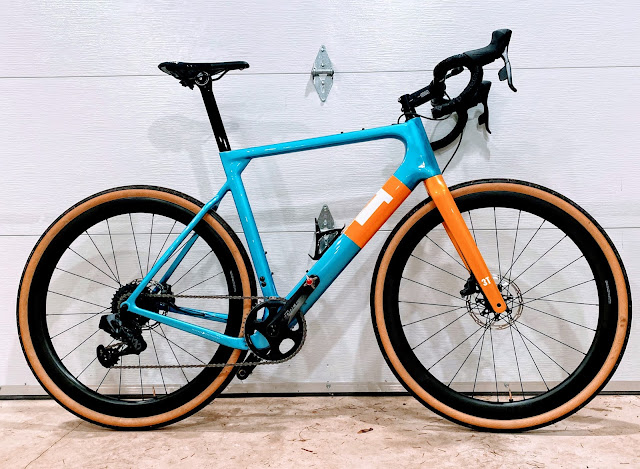 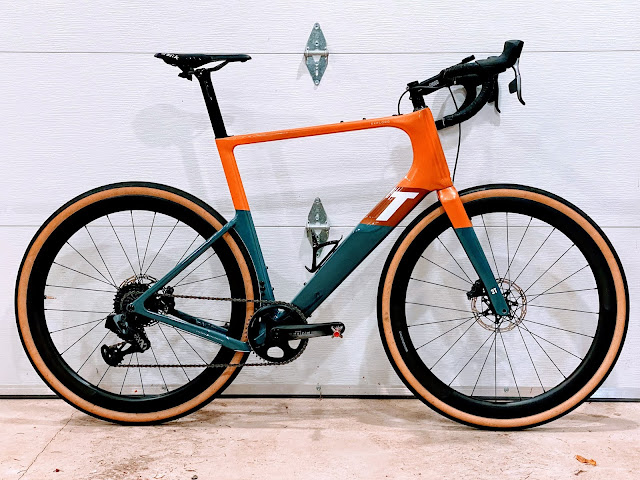 In exchange for my $700 I got several benefits.
Perhaps most importantly, the orange seat-bag that I got to match the old frame actually matches the new frame with its slightly "flatter" orange tint even better. 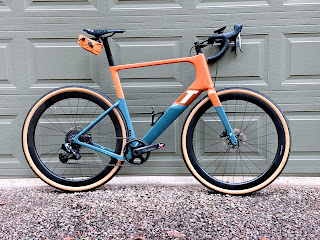 Not all is perfect: As mentioned above my Barlow Pass 700x38 tires are tigher fit on the new bike. Not as tight as a 700x28 on the Litespeed, but given the purpose of this bike a little extra clearance is important. I just ordered a couple 700x35 Bon Jon Pass tires in the Endurance casing. 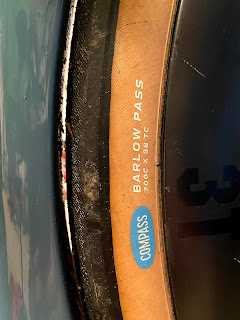 Just as important the 44T chainring clears the chainstay by only about 2mm. That's simply not enough. I'm ordering a 40T chainring. Of course this will throw off my gearing by a bit. I'll figure it all out once I get the new chainring installed. 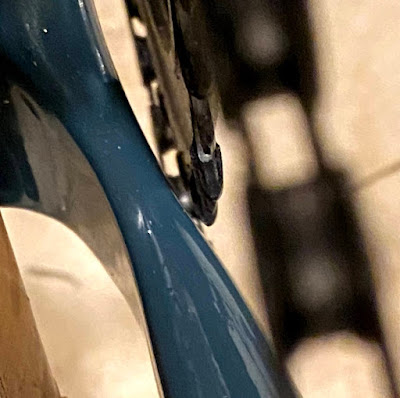 But after a short 15-mile test ride, I much prefer how this bike rides to the Exploro Team. And that's all down to geometry. Some of the niggling issues from the last generation remain, notably the "aero" seatpost which precludes using a dropper, and the annoying top-tube seatpost bolt, though at least they've now hidden that underneath a nice rubber cover 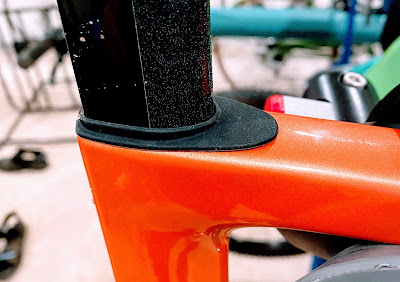 If I were to rate the Exploro Team from 1-10, I'd have given it a 6. A good bike with lots of potential, but with some real problems. In my book the RaceMax merits an 8. They've fixed some of the problems with the original, and improved several aspects. With a set of aero-bars (which I still haven't figured out how to affix) this could be darn close to the one bike quiver for me.
Posted by sam

I like those deeper colors, so that's something. Curious about weight, though weight is a lame statistic. I continue to think 3T under-serves with the cage mounts on these bikes, relative to the market, though they are clearly not pitching these bikes to the ride across Russia crowd. On net, that's a good-looking bike, so congrats.