Harrisonburg VA is a college town that is home to James Madison Univ. and Eastern Mennonite Univ. and is launching point for all sorts of Appalachian adventures.  I knew it best for Luigi's Pizza, an unparalleled post-rock climbing dinner in the mid-'00s.  It may still be? I hope so.

My last trip to Harrisonburg was for the 2018 Alpine Loop Gran Fondo, 100-plus-a-few miles of all sorts of fun in early fall.  I was way out of shape (still am) and the climbing knocked me around a bit. 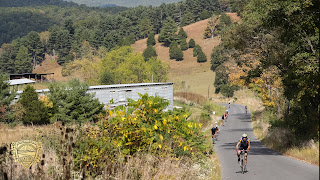 So when D__ proposed we get back in the saddle by meeting in Harrisonburg I was all in.  Turns out there are some epic gravel-ish rides out of there.  And I have this new 3T, you realize.

Rocktown Bicycles keeps a page listing gravel routes starting and finishing at its shop.   These range from the casually named "Morning Gravel," a 17-mile offering that looks like a lovely way to start the day - to "The Big Spruce," 145+ miles with >15K elevation gain.  Oy vey.  And, plenty to keep coming back for.

D__ and I started with "Harris-Roubaix," a marvelous name for a ride if I ever heard one.  Here:  https://www.strava.com/routes/12620059.  After a few annoying miles getting out of H-burg proper, we were on small country roads through farms maintained by members of the region's Mennonite population.  Roads were small, cars were few, and maybe 40% of the route outside of the H-burg metropolis was pleasant gravel, only occasionally washboarded.

Basic details (Garmin Edge 500):
This picture was not on the gravel portion.  I couldn't be bothered to pull the phone out at other times.

After a bottle change at the cars downtown, we headed back out for "Typical Morning Ride."  Here:  https://www.strava.com/routes/11140484.  Another nice spin, some of the same roads (which of course is what happens with a "best hits" list from the same start-end points).  Too much tarmac for our liking, but with roads lightly trafficked not an unpleasant ride at all.

Basic details (Garmin Edge 500):
How did the 3T Exploro perform? Largely, perfect.  The bike continues to roll and to handle like a road bike.  It does not feel snappy climbing, but I think that's probably operator error - seriously.  It feels downright quick in the drops on the flats or on rollers, so my strongest guess is that my fitness is just not there for the 17% grade at the end of Harris-Roubaix, or a number of similar sharp rises between the two rides.

Not sure if it is the aero frameset or my superior tuck or my superior girth, but I descended meaningfully faster than D__.  That's not an entirely new thing and I also note his 46cm flared Enve bars - not an aggressive tuck position in the best of circumstances.

I'm getting a creak in the bottom bracket.  Surely that's just a tightening job, but it's a little irritating <1000 miles in.

D__ was on the Open W.I.D.E. in the Yeti-blue paint job, with Shimano GRX Di2 and 57mm Schwalbe Racing Ralph tires.  A really nice looking setup and he raves about the ride.
Posted by Max