The oldest joke in cyclophilia is that the right number of bikes is N+1, with N being the number you currently have.  The joke is so worn out that it made it into "The Rules" by "The Velominati" (as the first Google result for "cycling n+1").  If you are curious, it is Rule No. 12.

The joke is so old that somebody created an apparel line called nplusone apparel.  Find it here.  And a pretty sweet online magazine (by which I mean "fancy blog").  Here.

And there is the intriguing question of how N+1 jives with marriage, discussed in this fun post at Town Mouse about optimizing N+1 and S-1.

Part of the reason the concept is so silly is that I think cyclophiles are inherently nostalgic.  When a bike gets old like a great pair of jeans, it has no market value, so cannot realistically be sold to an appreciative buyer.  And I am not willing to see my trusty steed, originally purchased in 1988 or perhaps inherited, ridden down the road with drop-bars turned up and rusty chain squealing after I handed it off to Goodwill or hawked it for $100 on Craigslist.

So a basement full of bikes is a little like that photo album you never look at but will nonetheless pass on to your family, who will in turn never look at it but never unload it either.

Here is my own N dilemma:  with a job in one city and a life in another, I have two homes.  At a minimum, then, N+1 for me has become 2(N+1).  Add in the fact that maybe 15% of my riding is in Oregon, where Sam keeps my old Cannondale (or is it his Cannondale?), and the number is getting really huge.

At last count, the number of bikes in my physical possession that are in good riding order (could be ridden with 2' or less notice, and 2' only because tires may be low) and of which any one would be perfectly serviceable as a stand-alone steed, is 11.  If you count the Cannondale, not in my possession but with me as its sole rider for at least the last 5 years, we hit 12.  Specifically:

The count excludes at least two bikes that are not for riding, but could be -- the early '70s Nishiki and the Schwinn World Traveler en route from Wisconsin.  And one more, an old Cervelo P2-aluminum, that can't be ridden outside but works like a charm on the trainer.

My collection has gotten so bad that I have taken to buying bikes for P__ just so I don't feel bad about owning more myself.  P__, who rides much less than I do, has 5.  Oh yeah, Sam and I helped Mom into two new bikes over the last year too.

Is this a problem?

First, I don't have room.  My small house in DC and my small condo in Indiana have become overpriced garages.  It is gotten to where I am literally daydreaming about a vacation home that is just a 40x40 garage with a kitchen on one wall and a bed in one corner.  The rest is a bike warehouse and workshop with a sweet audio system.

Second, I have lots of depreciating assets that could benefit somebody else.  Food for thought:  for every bike I could give away or sell to an appreciative counter-party, I would potentially be removing one bike-hater from the streets, on the following theory.  Everybody without a bike hates cyclists, but a fair proportion of those with bikes do not hate cyclists.

Third, I get my cycling fix these days from building bikes as much as from riding them.  I spent five hours and three beers last night rebuilding the Gunnar.  It is awesome.  But those five hours could have been spent riding one of the 11 other bikes in the collection.

If not N+1, what is the right number of bikes?

You could make a compelling argument that the correct answer is, actually, 1.  I think people with one bike may appreciate what they have more than do those of us with a complete stable.  That one bike serves for commuting, only to be cleaned and dressed up in advance of the Saturday group ride, loaded down in advance of the Sunday long ride, have fenders mounted for winter riding, and be rebuilt each year with 5000+ miles on the components.  Such a bike would probably be steel or titanium, perhaps with lugs, and nice components kept well oiled and tuned.  Here is a hypothetical photo album: 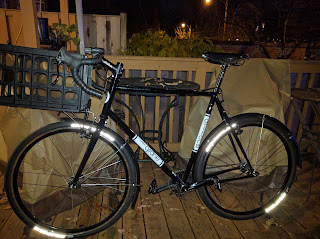 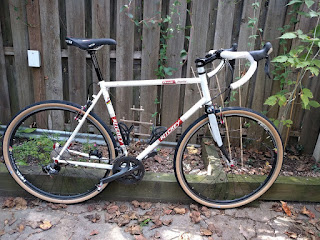 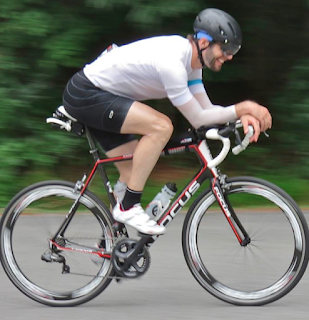 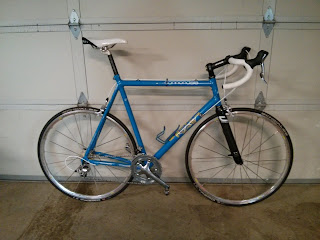 I am open to the criticism that this is still a ludicrous number of bikes for a middle aged guy with a number of competing hobbies.  (Next post:  what is the right number of pairs of skis?)  It is, however, approximately one-half as ludicrous as the current state of affairs.

The Gravity goes to Goodwill. I am not nostalgic for that bike and I don't really enjoy riding it, either.

The Salsa needs to be sold.  It is not easy to sell a titanium bike; the frameset (with Enve fork) and Ultegra 6800 group is far too valuable for most Craigslist shoppers.  Maybe eBay to reach a wider audience? 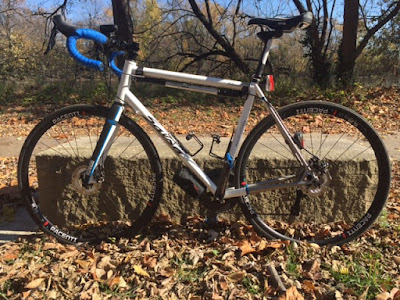 The Neuvation should go, too, although that is harder.  I rebuilt it as a 1x and not a lot of casual riders are interested in a single 52-tooth chainring.  Serious riders tend not to buy aluminum frame-sets.

And I don't think I can get much lower than that.  The carbon Cervelo may stay on the trainer and be ready in case I ever get the bug to race a triathlon again.  (I hope not.)  The Fatboy should be a fun bike for myriad purposes, including winter riding.  And the Specialized will stay in the basement in fighting trim in case Sam gets tempted to ride steep hills occasionally -- meaning he leaves Oregon and heads east for a weekend.

What is your optimal N?

I of course face the same dilemma. Probably warrants a post soon. Complicated in my case by the need for a couple mountain bikes.

The Cannondale is a must have. I'd dump the Ritchey and the old Focus. Nice bikes, both. But you can travel with any of the bikes. The Gunnar is in an odd spot. Too nice to treat poorly, but also too nice not to ride a lot. I'd move that to the condo and just make a commitment to keep it tuned, or get a fixie for the condo and consider the Gunnar your brevet bike.

This leaves you without a real gravel bike (though honestly the Ritchey isn't really a gravel bike either). The fatboy probably suffices for the occasional sojourn though.