Every bike I have built involved a certain amount of buying new parts to go with something I already had.  The Gunnar, when it is done, will involve well north of $2000 in components added to a frameset with regard to which I am attached.  Any such build involves a substantial opportunity cost, with new acquisitions preempting something else, like a dinner out or a trip to Europe.

I got away from the fixie/single speed thing several years back.  I have missed the simplicity since.  For a townie bike or commuting rig it is hard to beat something that needs no tuning and does not suffer from cross-chaining.

I have been meaning to build one, whether fixie or freewheeled, for some time.  The aluminum Cervelo, with its horizontal ends, was to be the frameset.  Then I cracked the head-tube installing a new headset.

But not before I sprung for a set of wheels custom made by Ron Ruff at White Mountain Wheels.  That was three years ago now.  Here I report on the wheels and discuss the original plan.  And here are the wheels, Kinlin rims, Sapim spokes, and White Industries hubs: 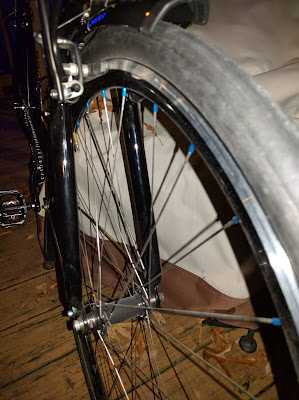 Fast forward to 2015.  The beautiful custom built wheels were gathering dust and I decided to replace the frameset.  I found this one:  the Gitane "City Link." 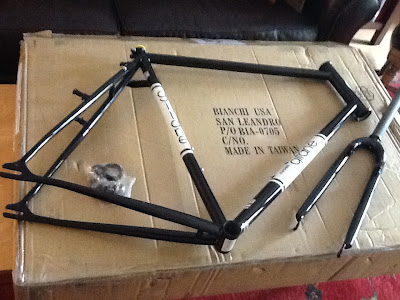 This is a Bianchi product. Bianchi bought the Gitane brand, which in the '70s was a legitimate French racing brand, and offers this rebranded Bianchia Strada with track ends.  Gitane means "gypsy," a nice word for a freedom machine.  A few more images of the frame:


The original plan was a fixie.  Ron, who builds perfect wheels, may not ride fixed; the White Industries hubset he picked for these ones did not accept a lock ring, so could only work with a freewheel.  The Gitane with custom wheels was to be a single speed.

Then they sat.  The wheels, the frame, the fork, moving from one stack of orphaned gear to another.

I've been on a building spree this fall.  The last several posts have more or less reported a new bike a week -- the Specialized Sequoia, the Ritchey Breakaway, and on a longer timeline the Gunnar Roadie.  All of this makes for some serious trickle down parts.

In stock for use:

Brooks B17 saddle, trimmed.  This saddle has been ridden once.  It was not broken in and I suffered for weeks.  I have since planned, over nearly a decade, to bring this back into use.  And to break it in next time.

Salsa stem with 25.8mm clamp.  I bought this for the original fixie, the white IRO Jamie Roy, in maybe 2003.  Using this here is a particular coup; not many bikes take 25.8mm stems in the modern day.

FSA crank, also purchased for the IRO and in a storage bin since. 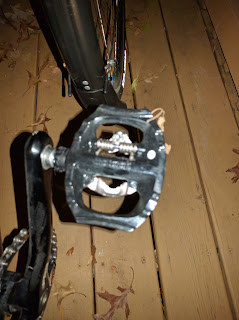 The pedals are one side platform and one side Shimano mountain clips.  I did not buy these; they showed up in an unsolicited package from Jenson USA the week after I bought the original Focus.  I tried to return them, but they failed to send the shipping label.  Which is good, because they are perfect for this use.


The brakes are supercheap Tektro small cantilever, originally on the Ritchey but replaced because they were less than ideally compatible with Shimano brifters. 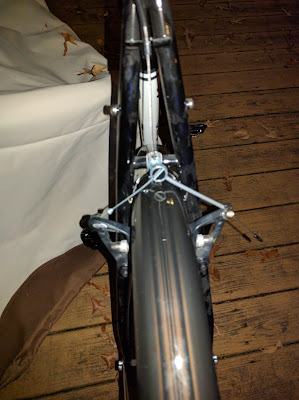 And the levers, an old pair of cheap Tektro aero levers I have had in house for years. 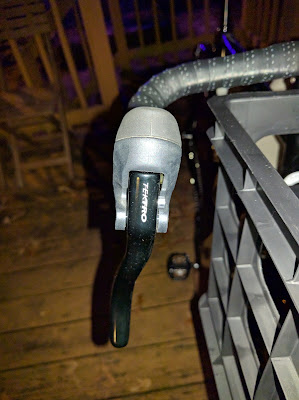 Those bars are the Specialized "Body Geometry" randonneur bars with funky curves back and down, which were on the Sequoia when I inherited it, later on the Ritchey, and looking for a permanent home since.

The fenders and front rack were originally bought for a different bike, I don't remember which.

And the 35mm Schwalbe Kojak tires originally went on the Ritchey.  That bike now has the 38mm Compass Barlow Pass.  The Schwalbes went on the Gitane.

Finally, that's a bottle cage in the above picture that has been on, off, on, off, on, and off of a parade of bikes since whenever.  A regular trollop of a cage.

Not everything on the Gitane is from the parts bin.

That Origin8 seatpost came in the mail yesterday.

The cantilever cabling came from Amazon for $10 or so; the brake cables came with the Velo Orange cable housing (in that sense a trickle down from the Gunnar).

The 16 tooth freewheel was new when the one I had in the parts bin did not fit the new 8-speed chain.  The 340 lumen Blaze headlamp, which needs to be moved now that the milk crate is there, came for $15 on an Amazon Black Friday special.

Finally, the leather bar tape was a Planet X bikes purchase, always intended for this bike.  With the Brooks plugs it makes a nice wrap.


With the new parts, and the old parts special bought for this eventual purpose, this cannot be said to be a true parts bin special.  But nothing had any other possible use or real market value.  The real cost of this bike, ignoring those costs that are sunk, runs somewhere less than $100.


Somewhere along the way this became a really nice looking bike.  Not bad for a build that nearly never happened.

My dream is one day to build a bike with entirely spare parts and have it be something other than a totalfrankenbike.  With all the bikes in the basement, condo, and at Sam's house, with parts that used to be on them, there must be something awesome waiting to be constructed.  Anybody up for the challenge?

Classy looking bike. That's a bike that anyone would be proud to ride.

I'd be wary of putting too much weight in that crate though, it seems awfully cantilevered out there, no? I like that everything matches pretty well despite being random parts. That's the advantage of basic black I suppose.

I'm quite certain that I've got a couple complete bikes worth of parts. But whenever I start down that path vanity gets the better of me and I build Yet Another Nice Bike. The closest I've come is the cross-check 1x10. which was maybe 75% recycled and 25% new.

I worry about that crate, too. The rack is bolted in firmly, but the crate is attached with zip ties. I think groceries fine, much else not. I have no idea how it would ride when loaded. Maybe that comes off one day.

The frameset is the hard part. If it is new it is too nice to use badly. If it is old your parts won't fit!

Sweet bike. How do you like riding it? There's one for sale on Craigslist in my area and I'm interested, but can't find much info on the bike aside from your build.

I've been back and forth on getting that Gitane City Link frame as a commuter, beater, coffeeneuring sort of rig. Funny enough, I ride a 61cm bike like yourself.

What is the OLD spacing for the rear of the bike? 130 or 135mm. This might affect my final decision based on parts laying around the garage.

Hey Will, my deep apologies -- we got out of the habit of moderating comments and I'm probably too late to give a meaningful response here!

If by *old* you mean the bike you ride in the 80s, almost certainly 126mm. The steel frame on the Gitane will bend into place to accommodate that hub, but you can probably also just get a spacer added to make up the difference.

I will note, having ridden this Gitane as described a fair bit for groceries etc., it's a weird feeling bike. I like it so much I keep using it, but there's something strange about the flex characteristics that makes standing and cranking a skill I have to relearn every time I get on it.

Aha. Regrets, and further regrets at the delay. 135mm.