I think we can all agree that the ideal jacket for night-riding would be about this bright:

But the dose of radiation required is a little more commitment than most of us have. After reading a few (quite a few...) very positive reviews of the ProViz Reflect 360 jacket, I decided maybe it's a close second. Amazon's selling them for a tad over $100, so I figured it was worth trying out.

Whereas most jackets use a few stripes of reflective material on a Gore-Tex base, ProViz doesn't bother with the Gore-Tex. They just do the reflective stuff. I imagine their R&D department skipped right over light reflection, straight to ludicrous reflection:

It's really hard to explain how remarkable this is. In broad daylight in my house with the jacket hung over a chair it still shimmered as it caught the occasional angle of light.

I've got a couple other biking jackets; an old Performance Gore-Tex jacket, and a recent Showers Pass of some type; one of their expensive ones, though we're talking about Showers Pass, so that hardly narrows it down. So of course a reflect-off was in order.

I lined all three up and put on a headlamp. Granted it's not exactly a car headlight, but it's nearly as bright, and I think it's close enough for this admittedly unscientific test. I jiggered with the camera settings until the picture matched approximately what I saw with the naked eye.

Here I was standing about 20 feet away with my headlamp pointed directly at the jackets. The Proviz is a solid mass of whiteness. The Performance jacket does reasonably well due to its yellow color. The Showers Pass jacket is visible only thanks to its reflective stripe. Again, this reflects (haha) pretty much what I saw. 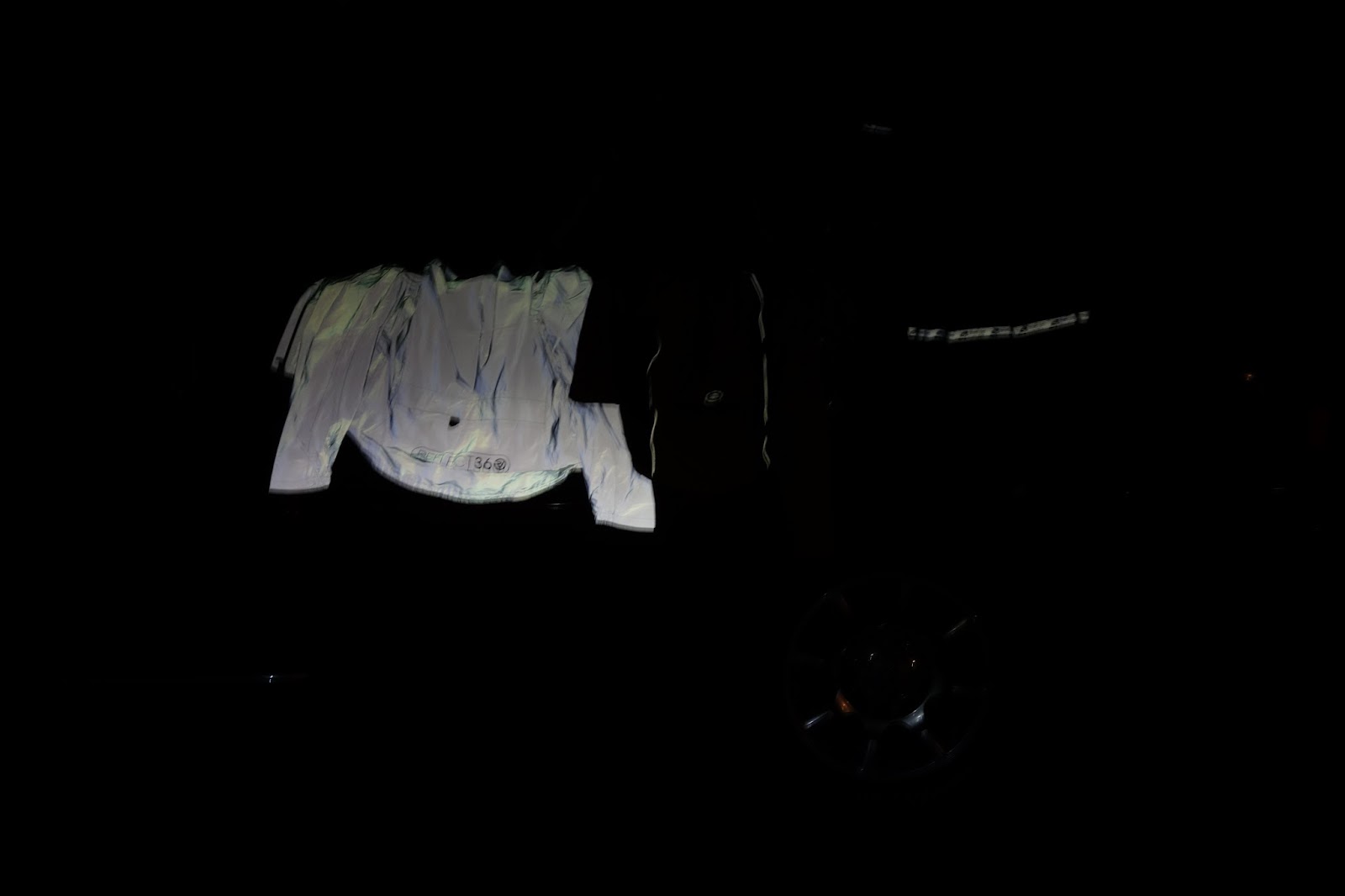 Same vantage point, but with my headlamp pointing toward the ground in front of the jackets. Here the Performance jacket is nearly invisible. You can make out a faint glimmer of the Showers Pass jacket's reflective stripe. But the Reflect360 is still very reflective. 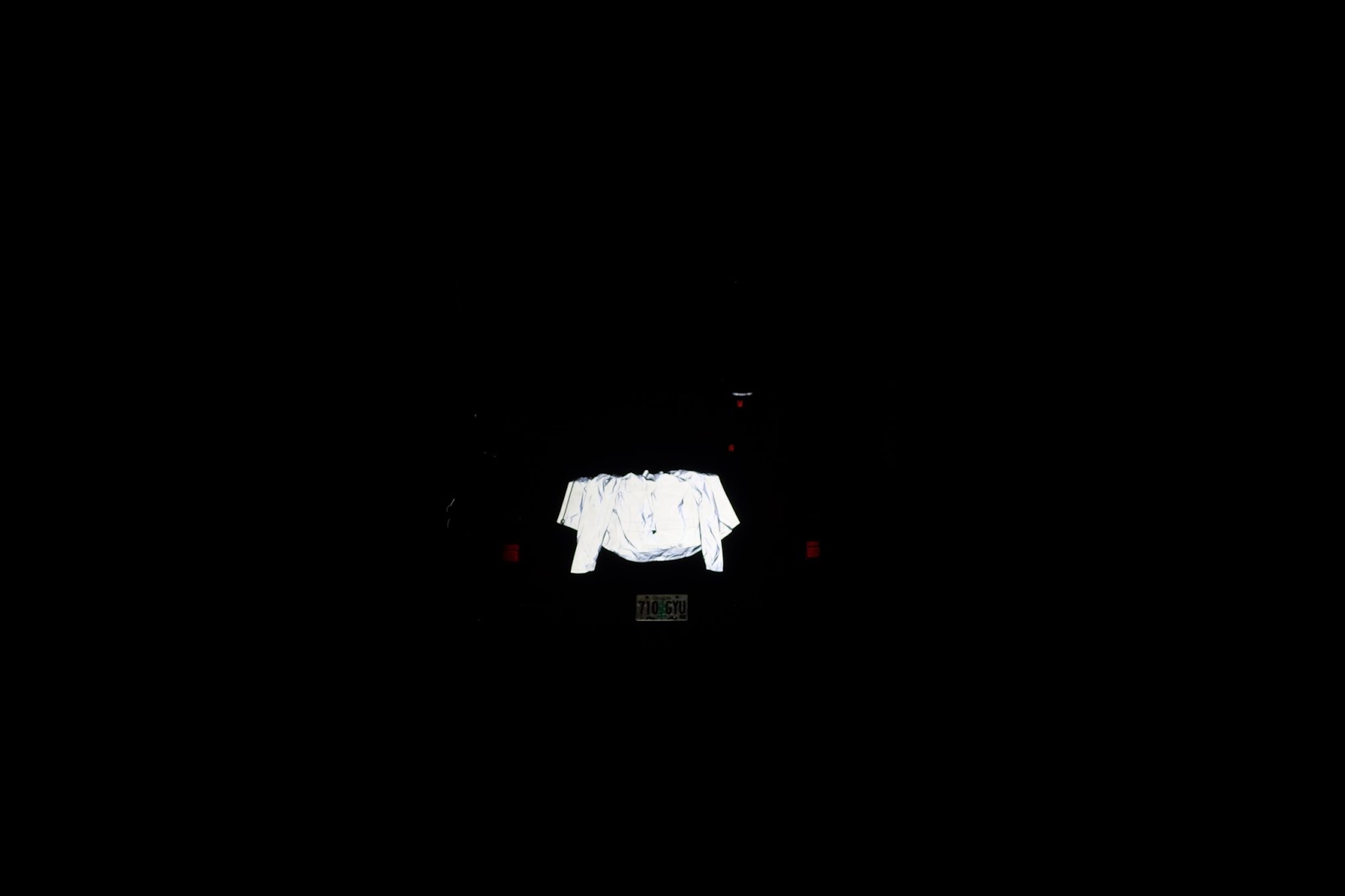 Having shown the futility of comparing the Reflect360 with my other jackets, for this test I walked about 100 feet away. The picture above is with direct light on the jacket 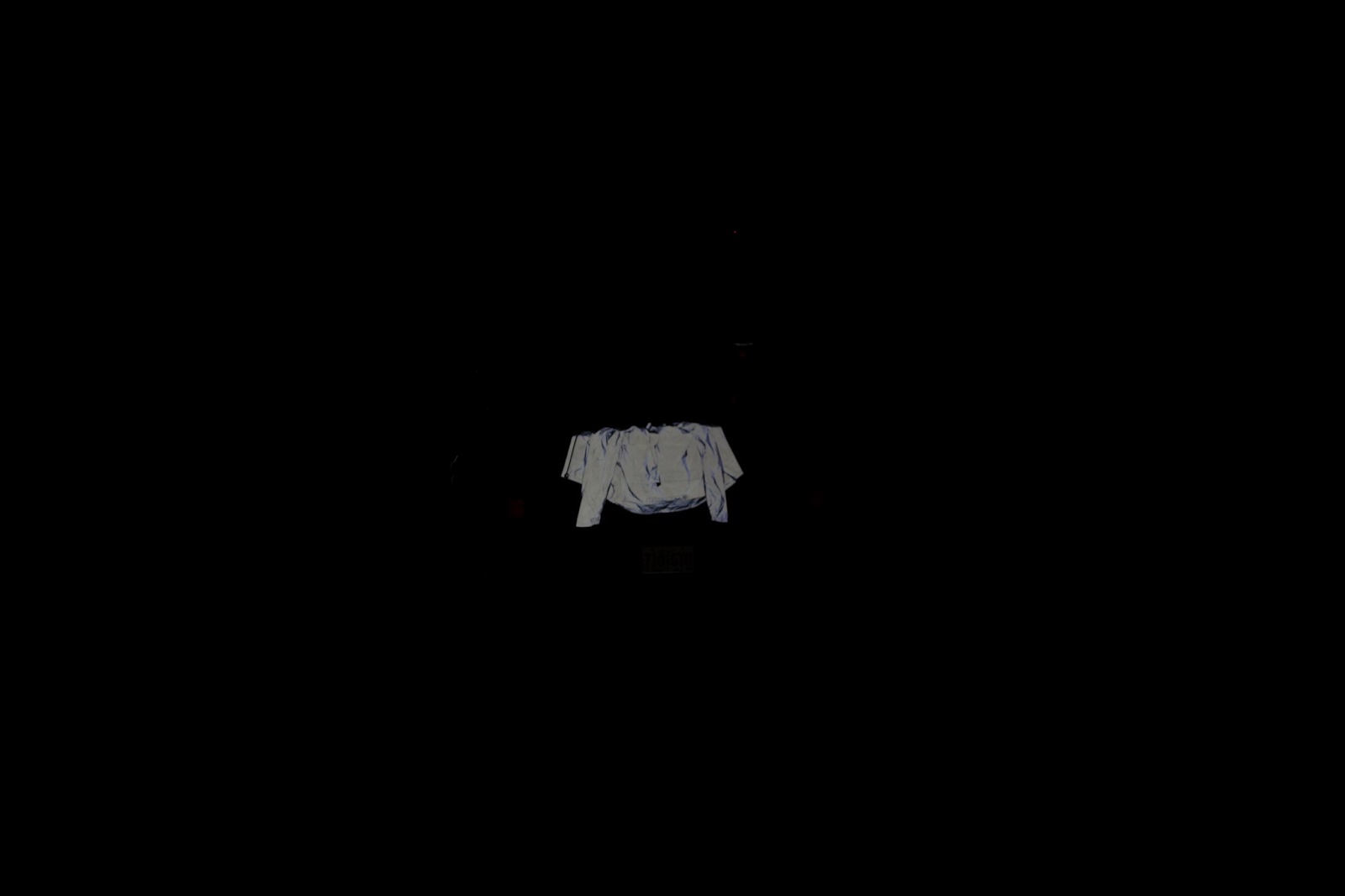 And this is with the light pointed way off to the left. The Reflect360 jacket is still very visible.

I had very little doubt that this jacket is less waterproof than a Gore-Tex jacket. But to be honest, wearing Gore-Tex on a wet Pacific Northwest day I still get soaked. So I'm not sure that's a big problem. The material feels a tiny bit stiff, but the jacket is brand new. I'm sure that it will soften as it breaks in. It's got sealed zippers, three exterior pockets (two chest pockets, and the usual back pocket), and an interior velcro pocket. Most cycling jackets give you only one or two pockets. I was pleased to have plenty of places to stash my keys, wallet, and cell phone.

The fit is "normal US" fit, as opposed to the euro-fit that most bike apparel companies adhere to. So an XL is a little big on me, but with a couple layers underneath it's about perfect.

I gave the jacket a trial run, with a 2-hour mountain bike ride in a downpour. It was sufficiently wet that my Gore-Tex gloves ended with the fingers full of water. And sure enough, the Reflect360 got soaked as well. My riding companion commented that the wet jacket was less reflective than when it was dry, but even at the end of the ride it was still reflecting significant light.

Granted I've had it for only a week; who knows if this jacket will have the longevity of a Showers Pass. But it needn't last very long to warrant the purchase.

That is extraordinary. I wonder if the reflectivity wears down with time? But I'm sufficiently convinced to have placed my order today.

Over the holiday we need to construct the test again with slightly different parameters.

First, the jacket needs to be on a person riding on the hoods and flats. Drops is irrelevant because I have never been in the drops after dark.

Second, the light needs to be pointing straight down a street with the jacket worn to one side or the other on a perpendicular street, approximating the way a car first perceives, or does not perceive, a cyclist approaching an intersection.

I'd like to see a similar use of ludicrous reflectivity on the back panels of cycling shorts/pants. I note even Proviz does not use their Reflect360 technology on pants.

That is absurd. I may get one for commuting. Not that I need another lightweight cycling jacket.

Query whether, if you're wearing this on a brevet, you still need a reflective sash. The sash would make you less visible.

Yes your point is a good one; it's possible that things will be a little different without the flat of the jacket facing the viewer. They do also sell a pack cover made of the same material, so if one rides with a camelbak they can cover that, partially ameliorating the potential 'leaning over' issue.

I think the reflect360 technology is recent, so pants may yet be forthcoming. Their nightrider pants look pretty good but I've not tried those yet.

I find myself wondering whether this presents a danger to your companions. Car rounds corner, sees one cyclist like it is daylight, can't really see others, assumes there is just one.

I'd care about that a lot more if I weren't the one with the bright jacket!

There is the notion that drunk people will drive toward bright shiny things. That school of thought advocates making yourself just visible enough for sober folk, but hopefully not very noticeable to the drunks.

Not to mention the very real worry that a deer will be blinded and stop right in front of you, transfixed by the brilliance of the reflection.

Amazon just dropped mine off today. Closest analog: Think The North Face 1987. (Yes, back then it was "The North Face.") Can't wait to blind drivers across northwestern Virginia next April.

Be honest... Was I exaggerating? I can't help but wonder if my gushing was hyperbolic.

Complaints: fit is awkward, feels like it would get wet immediately when I start sweating, maybe a tad heavier than is ideal if the purpose is an over-jacket for all seasons.

Compliments: everything you said about reflectivity is true. It glows in the closet.