I observe in my hub post (either already out or coming soon, depending which I get done first) that innovation is the enemy of standardization.  Which is good, if it produces positive change, but bad, if the change is small relative to the costs imposed (costs including limits on interoperability and search costs associated with once again learning what of the options works best for you).

So quick release bikes, with 100/130 spacing F/R (road) and 100/135 F/R (mountain) was the standard for years, and it worked.  The biggest issue was what kind of cam mechanism you wanted on your QR, and once you realized Shimano was the only real answer, that question went away.  (On this:  https://blog.huffmanbicycleclub.org/2013/05/kcnc-skewers.html.)

Then we learned disc brakes can cause QR to fail, by putting torque forces behind the front hub - or at least this was the rumor.  (Here from Sheldon:  https://www.sheldonbrown.com/disc-brakes.html.)  Wonder if it ever happened.  So we went to thru-axle, at first in the front only, then front and rear both.  (Some good steals on QR bikes in the 2014-2015 time frame when this switch was happening.  Like here:  https://blog.huffmanbicycleclub.org/2015/07/salsa-colossal-titanium-2014.html.)

"Innovating" in Thru Axles

It didn't stop there, of course.  Next up, the size and spacing on the thru axles.  While there are some other standards floating around, and fatbikes and mountain bikes in particular have their own thing going on, among the bikes I ride the question quickly became:  with 100/142 F/R (road, cross, gravel alike), 12mm rear (road, cross, gravel alike), would the front be 15mm or 12mm?  This was the VHS/Betamax of the biking world, circa 2017-2018. 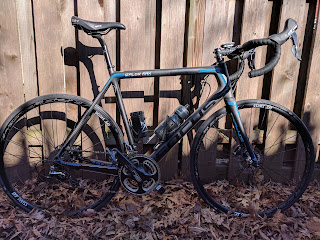 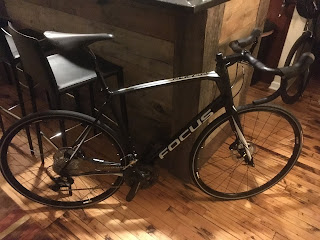 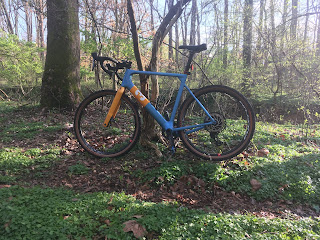 And none of this would matter, except that 3T included this wheelset as a free incentive when I bought the bike.  Also 12/12. 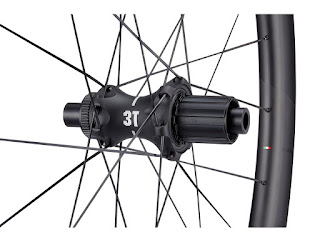 Not quite done.  For Christmas, P. bought me the Hunt Gravel 700c wheels with dynamo, originally spec'd for the Paralane, but with 35mm Schwalbe G-One tires, perfect for the 3T.  Those, too, are 12/12.

So three new wheelsets, with the idea being two will be swapped on the 3T depending on usage planned.  These are:
But none of the new wheels are interoperable with the Focus.  What to do?

Some cool small-fab fixes coming out to arbitrage the gap between 2016 technology and 2020 standardization.  First is the Joe Jackson Bike Parts 15mm-12mm conversion kit for front forks.

Joe Jackson mails from Delaware, so I suppose he's another mid-Atlantic cyclist.  I love that he has invented this elegant - and simple - fix for the 15mm thru-axle in a world of 12mm wheels.
I'm a big big fan of Joe Jackson and his home fab, though I had never heard of him before 10 days ago.  The idea of seeing a problem, heating up the mold, and solving it is something I dream about having the skills and the entrepreneurialism to do.

Here it is going on:

All I really needed was the front axle to conform, but then I had a threaded front axle (hex-wrench operated) and the RAT thru-axle rear.  Robert Axle Project to the rescue, turning my 12mm rear RAT thru axle into a basic threaded option matching the front.

Mine is the "Lightning Bolt-on Axle."

These replace the Focus RAT.  R.A.T. - Rapid Axle Technology - was Focus' innovation for its thru axles.  People loved it, right up until they realized that short of roadside wheel changes effected by your crew, the time spent fixing a flat was not devoted to the effort of getting the axle out.

Now the Focus has two threaded axles in 12mm each, allowing me to run the new 3T wheelset and any other modern standard set that comes my way.  Rode it 15 miles yesterday down Rock Creek Pkwy, through G-Town, to MacArthur, Reservoir, MacArthur, back toward home on Loughboro, Nebraska and neighborhood roads from there.  New wheels ride smoothly and the new axles held.

"""
Then we learned disc brakes can cause QR to fail, by putting torque forces behind the front hub - or at least this was the rumor. Wonder if it ever happened.
"""

Do you remember riding my hardtail Lynskey in Oregon? Halfway down the cross-country trail the front wheel had come partly out of the front dropouts, even though the skewer was still tightly closed. Whether that was the torque from the disc brake I'm not sure. To your earlier point, that was an open-cam Salsa skewer. That night (or maybe the next) I placed an order for a half dozen Shimano mountain and road skewers, and replaced every open-cam skewer I had. Never had another problem.

I'm glad to hear we seem to have reached a point of standardization, at least if your experience is a guide. Of course it's only a matter of time before Specialized introduces a Roval-specific 12.5 variant, but we'll enjoy it while we can.

Was I riding at that time or you? I can see the case for thru axles much more clearly on a mountain bike, for about a gazillion reasons - although I will also say based on my own experience with QR skewers on road bikes (having nothing to do with disc brakes) I like the security of a big bolt through the fork.

Specialized: the Apple Corp. of cycling. Cool gear but don't forget the dongle.