A fair amount of new gear in the house in 2015.  For an EOY blog feature, I'm counting down my five favorite.  Parameters:  none, except that the gear on the list has to be credibly biking related.

Here's the Ballista in yellow, if by "yellow" you mean "chartreuse," which is the color both Sam and I have. 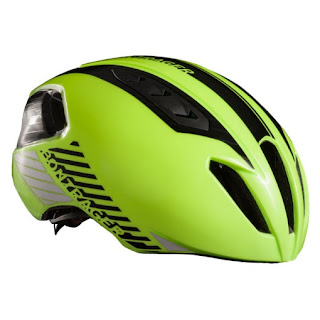 The Ballista is intended to be aero, light, visible, and broadly functional.  According to Trek, in one of the least informative product descriptions available on a manufacturer website:

The Aerogeeks review starts out inauspiciously, parroting the line about ancient Greek weaponry.   It continues to duplicate a Bontrager claim about aerodynmics that the Ballista beats aero-road offerings from Giro, Specialized, and Louis Garneau in "testing at 30 mph at a helmet angle of 30 degrees."  Helpful so far as it goes, but I suppose I need to buy a different helmet if I conclude my own angle is closer to 25, or perhaps 35, degrees.

Aerogeeks continue to report a real weight of 272 gms, not far above a true road helmet.  The S-Works Prevail, high-end road helmet that does not purport to be designed to optimize aerodynamics, claims a weight of 214 gms.  And the low-end Specialized Echelon is reported by Specialized to weigh "about 305 with out a visor".

The Advantage 2 works fine for Ironman use, but seems like it might be a tad uncomfortable over long miles.  In particular, one worries about what happens in a cross wind.  Or if you turn your head.

The Giro Air Attack, below, is both heavy and hot.  In fact, it appears the primary benefit is that it makes the wearer look mean.  Which is no small benefit, of course.

Then there's the white skull cap below.  Hard to find in the market these days.
In contrast with the Giro Air Attack, the Ballista has a good venting system.  So much so that when I raced in mine in October, the crew taped the vents over to keep my head warm through the night.

I can also report that it the Ballista is light, comfortable to wear, and broadly functional.  After 27 hours with it on my melon back in October, I did not suffer the helmet fatigue that I frequently expect on a long ride.

It looks good enough to wear for an afternoon ride -- don't burden the poor Ballista with the aesthetic failings of its wearer in the pictures here.  Given the aero design and bling factor, I probably would not wear it for the daily commute, unless other options were truly foreclosed.

I have to take the aero benefits on faith.  Visibility benefits seem to be real based on the below picture.

And, here's the empirical study:  there is a 100% correlation between my wearing the Ballista and having the best ultra-race experience of my biking career.  Seems dispositive, no?

So, a truly wearable helmet that supposedly makes me faster.  Number five on my list of favorite new gear for 2015.

I'm in agreement with your assessment of the Ballista. In hindsight I might have gotten a more subtle color and augmented with some reflective tape. But I figured buying the chartreuse would make mine unique. I guess you made the same mis-calculation.

My other helmet purchase for the year was a Specialized Prevail. While the Ballista does breathe pretty well, the Prevail breathes better, and looks marginally less goofy when used on a fat-bike.

But the Ballista is the best compromise of form, function, and price that I've seen so far.

Good chance you have one of the remaining four as well. That so-far-unnamed piece of gear might just be number 1.

That Prevail is a good looking melon-cage and the right weight for just about any use. It doesn't match your new Castelli aero-gear as well as does the Bontrager, of course.

After seeing yours at Natchez and doing some research, I picked up one of my own recently. I couldn't quite bring myself to go Chartreuse, and the Team Trek all-white looked a little moon-man, so I went with the white/silver combo:

I've only worn it once so far, but it was on my unreasonably successul 200k brevet a week back, so no complaints thus far. I agree with the assessment: extremely comfortable. It's hard to say if it's any faster than anything else out there, but my suspicion is that it's quicker than the Synthe: even if one buys Giro's contested aero data based on a head position typical of a roadie, on long ultra events, I find myself more often in the aerobars looking a bit downward, and I have to believe the smooth profile is quicker than Giro's sea of vents. Of equal concern is that the area of the Synthe behind the ears fits extremely snugly to the head, so much so that the Cardo speaker arm digs into my head uncomfortably. For Sebring, I'm debating whether to go with a taped-up Ballista or the almost entirely unventilated Kask Bambino I've worn with some success in mild temperatures.

Speaking of Sebring, this year will feature no Baloh, Luikart, Tesgaard, or Hopkinson.

Nice get! That white and silver is pretty elegant. Glad you like it too. Also glad we won't match completely.

Sebring: that's an optimistic list of no-shows. I do see that some guy named Taaffe may be there, as will some woman named Cooper. I also heard an unpleasant rumor that there may be a Kiwi present. And, of course, former ultracycling champion Zamboni.