Halfway through the count, I'm now at the Compass Chinook Pass EL tires.  These were literally a 2014 addition, as they are a present from Sam for Christmas last year, but the first ride with them was not until February 2015.  So they count for this list.

Heine has the Compass tires made to his specifications in, I think, Japan.  He is a proponent of ultra-supple and lightweight sidewalls.  Compass tires are famous for smooth rolling.  Somehow they accomplish this without being seriously more fragile than other makes.

I like how they look.  No uber-bling graphics, no weird coloration.  Just black on black with a small decal, the color of which changes depending on the tire size.

I also like the names.  Chinook Pass is an actual geographic feature in Washington State, where Compass Bicycles is located.  A "chinook" is a weather phenomenon characterized by warm winds blowing out of the mountains -- Sam and I grew up with them in Alaska.  So riding Chinook Pass tires feels somehow like home.

And the 28mm Chinook Pass tires perform extremely well.  My first ride on them that I remember was on Ascension, the silly-hilly ridge hopping endeavor Damon created in Gambrill State Park.  Descents on Ascension are steep and technical.  I found myself laying the Focus over in the turns with a degree of confidence I have not frequently enjoyed on a bike.  A ski, maybe, but not frequently a bike.  The tires, wheels, and frame worked together to make a particularly excellent and stable ride.

I have since ridden the Chinook Pass tires on the Flèche, a likewise hilly and occasionally technical route through the Blue Ridge Mountains in Virginia; the Big Savage SR600K, crossing many of the major mountain ridges in eastern West Virginia; and most recently, for commuting purposes on pot-holed streets in Indianapolis.  (Crime, yes, but if I had a Ferrari, I like to think I'd drive that too.)  The tires roll like a dream in every use.

A note:  I broke at least one plastic tire iron mounting these.  Then I learned that mounting tires on rims that are tubeless compatible is a unique process.  Heine describes it here.  Note, in particular, the instruction to place the bead "in the curved well in the center" of the rim rather than on the shelf next to the rim wall.  On old rims that wasn't an issue.  On tubeless compatible rims it is.  Having figured this out, I'm golden.

At $76 per tire, these aren't cheap.  It's hard to make a strong "buy" argument for them when you can pick up Vittoria Evo CX in 25mm for $36 a piece at Merlin, or Specialized S-Works Turbo for $55 apiece.  (On the other hand, I just made an argument for not one, but two, pairs of leather lace-up shoes in the prior post.) 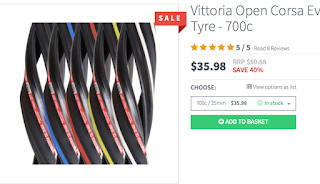 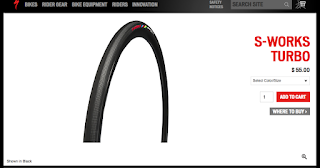 I don't know of tests running these three tires against each other, but the Vittorias and the Specializeds land in the top 5 in most of the tests of major-manufacturer rubber.  They outweigh the Compass Chinook Pass by a few grams.  But just a few.

If, however, you can work out the Compass Chinook Pass as a gift -- well, you can be sure they are well worth the thank-you card.

I can't argue with this pick. My tire history can be roughly divided into three timeframes... Avocets for quite a while, when they seemed to be making one of the few truly treadless tires. Then a couple-year long Schwalbe Ultremo obsession. But since around 2009, with a few excursions (the winter rain bike is on Schwalbe Marathons), I've been on Grand Bois and now Compass.

The two are similar enough that I think they can be grouped together. Flat-proof? No. But quite good. In 2008 I started RM1200 on a Grand Bois 700x26 that was showing threads, and made it through without a flat. The Compass tires have been comparable. Lifetime has been good, even with a clydesdale on board. I don't track carefully, but my gut feeling is several thousand miles on a rear, and more on a front. Max and I keep talking about trying to do some roll-down experiments to test how they roll compared to other fast tires, but somehow haven't gotten around to it. But I bet you're talking at most a couple watts difference. I'll pay that for the added comfort.

Re: RM: apropos, obviously, as we have committed to that ride for 2016! And like that data point I have several experiences that can't be scientifically proved but they have the one factor in common -- the Gran Bois (and now Compass) tires. Thus, whether it's the Gunnar, the Focus, or now the Salsa, I just get better rides on this rubber, I don't know why, but I don't have enough data to regress over other variables.