In two weeks I plan to start this race in Nashville and, legs willing, finish it some 28-30 hours later.

I've dabbled in the longer-than-100-miles world for some years now and have tried racing these events over the past three or so.  I think my count of race finishes includes 3x12 hours and 2x24 hours, but of course, "finishing" a time-limited race simply means surviving that long.  Racing a set distance actually requires one to ride that far.  And the plan for two weeks from now is to ride 444 miles over, I hope, not much longer than a single day.

By all appearances, the Natchez Trace in October will be a phenomenal venue, if 444 miles of tarmac can be called a singular "venue."  Here is a picture from the race website:

As much as any of these things can, the race looks like it might be pleasant.  One description of the Natchez Trace Parkway calls it the "Highway of Glass," referring to the smoothness of the pavement.

The race has the virtue of giving the sense of really going somewhere, crossing two state borders and ending almost in Louisiana.

It also appears to be an elevation profile more suited to big-and-tall cyclists like myself.


And finally, weather in that part of the world in October looks superlative for riding a bike: 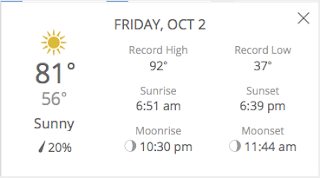 Sam and Damon will be crew, paying into the Faustian bargain we three struck over one e-mail thread several years ago.  ("Here's a great idea.  We each crew for each other whenever one of us has forgotten how unpleasant 24+ hours in the saddle can be!")  As things stand, Damon owes a crewing after last year's Silver State and Sam is gathering one more chit for whatever attempt he might later announce.

Preparing for such an endeavor is more art than science.  I've been attempting long distance events for about 15 years now since my first marathon in 2000 and have cycled through
-- and found that all of them work about as well as the other for an also-ran like myself.
This year's training has been a smattering of things that seemed, two weeks ago, largely to have paid off:


I have not kept a good count but I would guess this is my highest mileage year ever.  The base miles seem to be in place.
As I say, I felt good about it two weeks ago.  One concern:  the Big Savage SR600, which seemed like a great final long weekend to prove my fitness to myself, may have been just a tad more than I bargained for.  Last week I was mostly stuck on my arse and this week I took quite ill with a cold.  I seem to be out of the woods on the health front, but today I'm something of a puddle.  Best guess is that the "caffeine taper" Damon has prescribed is having more of an impact than I imagined.  (Who would have guessed there is a website devoted to this concept?)

Am I ready?  I have no idea.  And what is "ready," anyway?  Greg LeMond famously said, "it doesn't get easier, you just get faster."  I'm pretty sure I'm ready to finish the event.  I doubt I'm ready to win the event.  So I suppose the question is whether I will be proud of myself at the end.

Bike:  I will ride the Focus Cayo Evo (and here) (and here) that has been my primary bike since August 2014 when I found it for a steal at JensonUSA.com.

The bike has some upgrades, including the awesome Specialized Cobble Gobbler seatpost, Profile Design T3+ Aerobars with the oh-so-comfortable J4 arm rests, and bar-end remote shifters.  None of these turn out to be vanity add-ons:  I would buy all three of them again, and, in fact, I have a second Cobble Gobbler and set of T3+ bars, with yet a third set of those J4 rests around, for other bikes.

Aero Gear:  With a relaxed elevation profile, I believe this race will favor aerodynamic positioning and gear.  I have the Hed wheels (6 cm rear, 4 cm front) shod with nearly new 25mm Vittoria Open Corsa Evo CX tires, "the choice of champions."  And I replaced the heavy-and-hot Giro aero helmet you see in the above picture with the Bontrager Ballista.

Illumination:  Lighting is a surprisingly important investment for a round-the-clock ride.  Cheapo lights do the trick for 90% of cycling, but a bright beam in front sure helps to keep one alert when the sun goes down, and -- if there are any fast descents -- 300 lumens is the minimum required if you want to let it go.  I've been riding with the simple and elegant DiNotte XML-1 headlight for years now.  It's perfect for the 90% use and, using AA batteries, offers the extra benefit of easy gas-station battery replacement.  But DiNotte has never seemed to give me the true high-beams effect when I really need it and for reasons I've never quite understood, I never seem to get the life out of the batteries in real use that I get in workshop tests.  Finally, how to mount the battery packs is one of those surprisingly annoying conundrums that I don't like to think about when the head gets thick and fingers fumble from cold or lack of glycogen.

Damon has sold me on the Exposure lighting systems.  These are self-contained, offering the huge benefit of no cords or external batteries.  These are bright, with 500+ lumens up front on high and something like 100 lumens in the rear.  These are long-lasting, including 3 hours on high, 10 hours on medium and longer than anybody needs on low.  These can be recharged by USB cord from a portable battery, or car, if the ride goes into the second night (as the Natchez will).  The Strada headlamp has a remote switch that can be attached to the bars and operated without moving your hands and fumbling for the switch in the dark.

Mostly, I've seen Damon ride with these with complete success around the clock in Alaska, Nevada, and West Virginia, giving me the confidence in their real-life performance.  I'm enthusiastic about the Exposure lights in Natchez.

One last:  the race requires a high-visibility jersey.  Thankfully, my clothier of choice, Rapha, offers its aero jersey in lime green.

So, I suppose I will not have gear as an excuse.

Thus goes the report of what is to come.  Advice in the comments most welcome.  My prediction is that I finish and that I enjoy it enough that I want to do it again.  I wish I could predict something more exciting, but middle age and experience teach me discretion>valor.
Posted by Max

I'm looking forward to it.

Tell me about that computer mount extender. It is included in the 'New electronic gear' caption. Does it perchance include a battery? A garmin mount with a built-in battery (perhaps doubling its life?) would be amazing.

Those new Exposure lights look really slick. Tempting. The battery readout on the back, if even somewhat accurate, would be a nice improvement on current lights.

I am looking forward to this event.

Nothing so exciting about the Garmin. You are right -- such a thing with a battery would be worth its weight in aero-gear. It is in the picture because it arrived in the same package as the blinkie lights. Goal is to get the Garmin off the stem and to make the plug port accessible so I can run the backup battery.

A cool feature about the Strada is the choice of programs. I can choose the 3 hour/8 hour/15 hour program or the 5 hour/10 hour/24 hour program, which changes the output at high, medium, and low. I imagine with the car to recharge during the day one goes with the highest output program. On a two-day ride the lower output program might cover you without recharging.

Good luck, that would (will for you) be awesome to complete. The thing I would be most concerned about is gastrointestinal function. Foods that work best and foods to stay away from (I've learned the hard way I have a couple), sticking to a refueling schedule, and so on, and of course, do I need a little help (or not) moving things along the old disassembly line. Too much information but I tend to bind for a couple days when travelling!

Excellent comments. Thank you. I agree, too; nothing will bring this to a sad end faster than getting behind on food. Would that there were a science to it, but none I've found!