In Defense Of The Rain Bike

By which I mean my rain bike. I mean, not that the concept of the rain bike needed defending from anyone but me. My rain bike has, until this year, seen precious little use. Because historically, when it was raining, I stayed inside (where it was dry). My rain gear too has seen little use outside of the occasional wet spring brevet (aka: every Birkie 200K, ever).

But this year has been a little different, with a fair number of miles coming in January, and a few less coming in February. In the Pacific Northwest riding in January and February means you're going to get wet.

I originally put my Surly Cross-Check together as a rain bike with fancy fenders, 1x10 gearing, cheapo Neuvation wheels, and bulletproof Schwalbe Marathon Plus tires. Early rides were disappointing. The chain derailed, the fenders weren't straight and they rattled, and the tires felt like I was riding through molasses.

Last fall I made a concerted effort to make things right. I bought a new fender stay that wasn't bent wrong. I installed a cool spring-thing and several additional leather washers. I replaced my chain-ring with a narrow-wide ring that was designed not to derail (what a concept). The bike still isn't perfect, but since those changes I've got probably 300 rattle-free miles so far this year.

The last couple weeks have seen a deluge of rain come to the Northwest, an area already known for its deluges. Now while rain is nowhere near as problematic as the snow that the Northeast has seen, it is also not conducive to long fast rides on the summer bike. So this weekend's rides took on a slightly more adventurous bent.

Saturday I planned an easy 20 miles out to the end of pavement of Dairy Creek and back. But the ride out was easy enough that I decided to continue on the gravel. I've been wanting to find the back route that connects Dairy Creek and Pumpkin Ridge. Though both claim to be dead-ends, there is a labyrinth of forest and logging roads between them, and if one looks carefully on Google Maps there appears to be a secret route through. On my summer bike this would be a no-go thanks to my skinny go-fast Grand Bois 26mm tires. But on the Schwalbes (35mm, if I had to guess), I wasn't at all concerned by the gravel.

So I started headed out Fern Flat Rd. to Greener, and then took a right on Burgdorfer.

Burgdorfer was no joke, with a rough gravel surface that bounced between 20% and 25%. I'll admit that I walked part of it, which I suppose disqualifies it from the February Challenge. Back on these roads houses are few and far between, with a real mix of poorly maintained houses with lots of cars in the yard, obviously home to recluses and massive well-maintained mansions, also obviously home to recluses. Though Burgdorfer is, I think, a public road, riding past homes still feels like you're riding through someone's private property.

Burgdorfer should have connected up to Pumpkin Ridge but, like homes, street signs are also hard to come by back here so you never know what road you're actually on. I soldiered on past a couple turns that looked distinctly uninviting with "No Trespassing" signs (pockmarked with birdshot) and "Private Property" signs. After a while I came to a fork.


To the right the road turned into a seldom-used narrow jeep trail. The road to the left looked a little better, so I picked that way. A few more miles, and I hit a gate 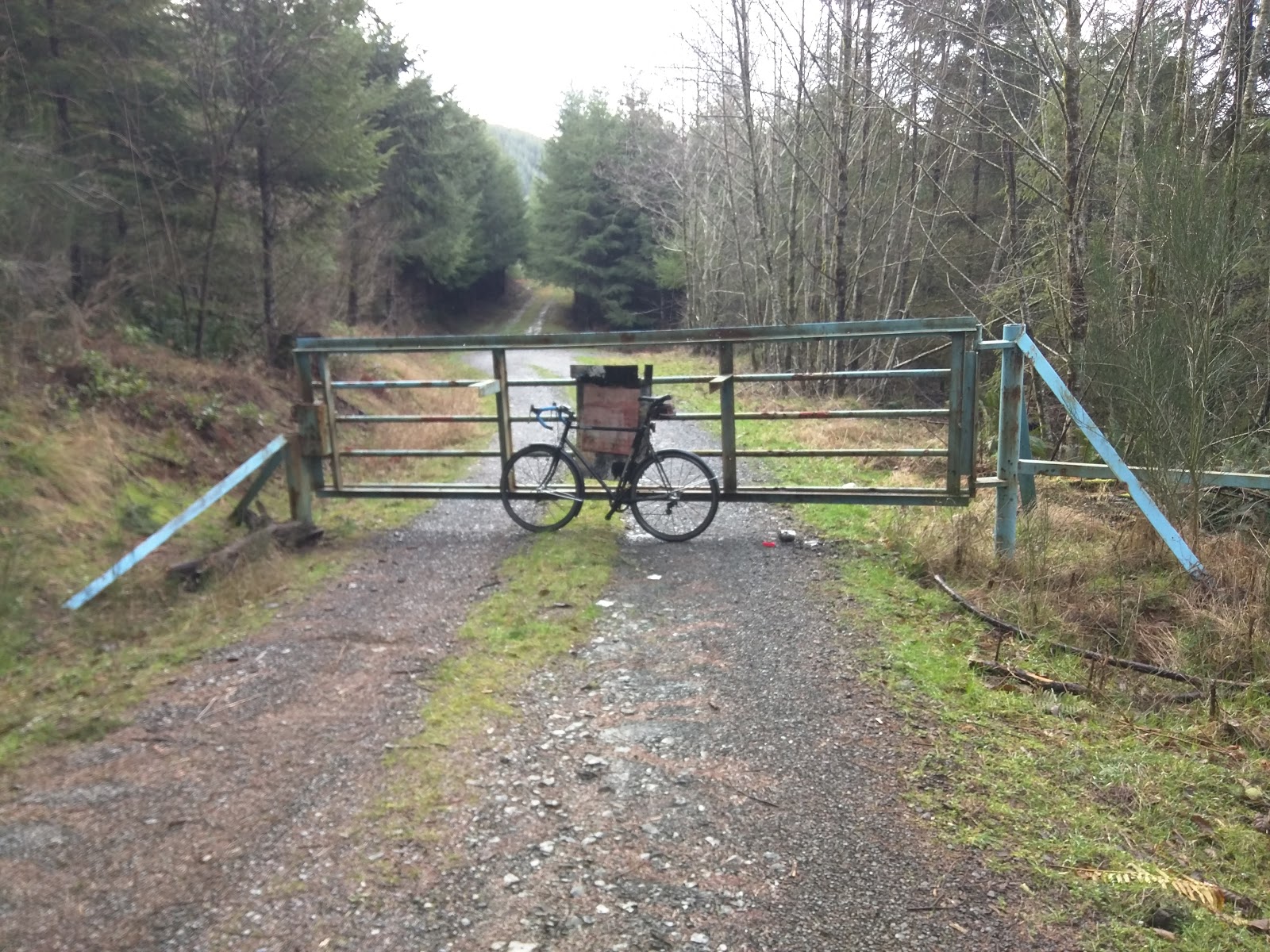 These gates are the bane of forest roads in Oregon. Many a great back-road is impassable by vehicle thanks to a 1-mile gated section. On bike I could have continued, but this clearly is not the "right" way to get to Pumpkin Ridge. So I turned around and started regaining lost elevation.
I tried one of the unmarked turns, and ended up literally in somone's front yard. I was running out of time so turned around and headed back Burgdorfer. Which was about as painful going down as it was coming up, thanks to the shrieking of my brakes.
It would be easy to call the exploration a bust, but of course the enjoyment is in the journey more than the destination. And thanks to my hardy rain bike, the journey was lovely. After referencing google maps I found the turn I should have made. I'll have another go at this soon.

Sunday's ride was an all pavement endeavor, along oft-ridden roads West of Hillsboro. However those roads are not oft-flooded. 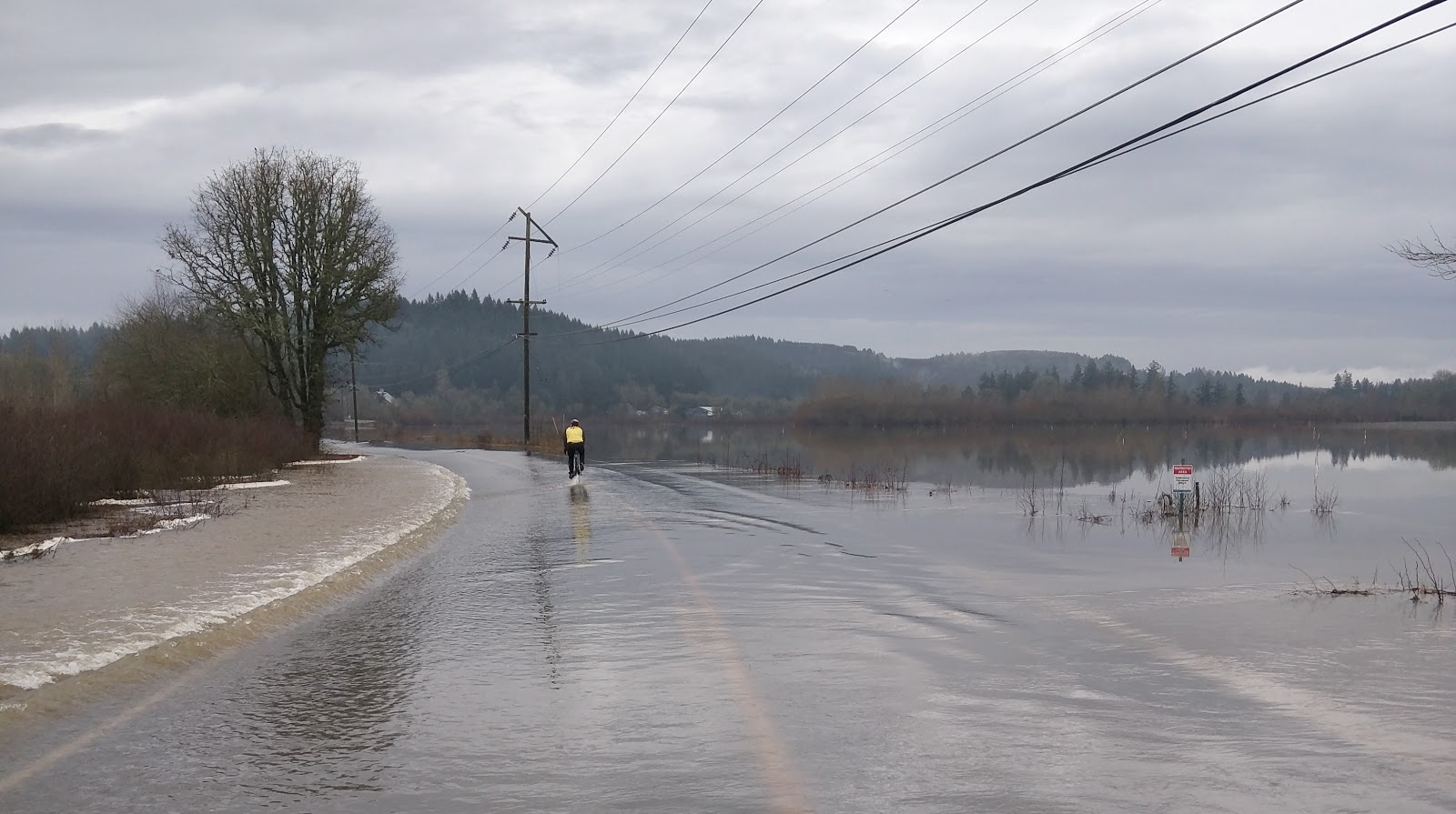 At the worst, we were fording a good 6 inches of water, moving quickly across the road. It is a strange sensation; if you make the mistake of looking at your wheel you'll quickly head toward the ditch (which you don't want to wind up in!). Keeping your head up and looking down the road made the stretch manageable. There were several other flooded areas, but this one was the deepest.

On the fast bike I wouldn't have attempted this. Because, you know, expensive hubs and bottom brackets. But the rain bike handled it all with aplomb. I may pay the price in rusted components; we'll see. But a rusted hub on a $300 Neuvation wheelset is a lot easier to swallow than the same on a $700 wheelset.

This weekend reminded me of the value of the rain bike. Not just as a bike to ride in the rain, but as a bike to enable more adventurous rides. Without my rain bike I would have sat this weekend (and most of the previous couple weeks) out.

I definitely need to get a rain bike! Fenders -- great concept. Who'd have thought. And Marathons wide enough to get some benefit from the tread. It just gets better! I suppose the ideal rain bike has disc brakes, which all the cool kids seem to be riding these days and mitigates that brake scream you note.

Every so often I wonder how you justify a bike in terms of dollars per use. Consider the $2000 bike I might hypothetically buy -- would that get 500 total uses, for $4 per? Combining your post about January riding with this one, it seems the Surly approaches a fair definition of justified.