I'm a little embarrassed to admit that the easiest way to convince me to buy a $6000 bikes is to throw in a free wheelset that I don't really need. There, I admitted it. The bike in question is, of course, the 3T Exploro. And the wheelset? 3T's Discus 45|32 LTD.

Herein I'll discuss briefly the process of setting up that wheelset, the initial results, and I'll also reach a somewhat uncomfortable conclusion. But first, the final product

So what is this wheelset? It's a 700c carbon aero wheel, 45mm deep and 32mm wide. Moderately but not extremely lightweight at 1640g (sans rotors of course). I didn't take any pictures before I put on a tire, but it's really quite wide. 3T says it's optimized for 28-32mm tires, but of course I put on a Compass/Rene Herse Barlow Pass 700x38.


The fork has plenty of space for additional tire 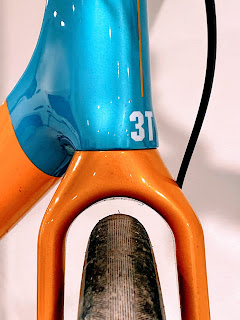 But things are a little tighter on the rear wheel. A 700x44 would be a real squeeze here 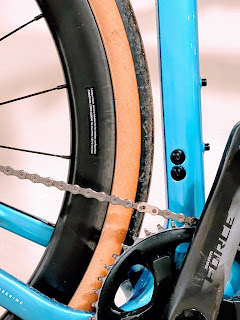 Only once have I tried tubeless. It was on a road bike back in 2008 or so. I was using a Ksyrium rim (no spoke holes, but definitely not tubeless compatible) and a Schwalbe Ultremo tire, also not tubeless compatible. Regardless, it actually worked until I split the tire open on a rock. Patching and putting a tube into a tire full of sealant turned me off tubeless.

Well, here we are a dozen years and at least that many bikes later. Mountain bikes are all tubeless these days, and I'd guess 25% of enthusiast road bikes have gone tubeless as well. Since it's the thing to do, I may as well try it. I threw a couple ounces of sealant in each tire, pumped them up (didn't even need a compressor, and gave them a spin, A few little holes on the tires sealed up, and they held air.

Next morning they were empty. I pumped them up again. That night they were empty. Hopefully now that I've done a quick ride on them the sealant will be well enough distributed that they'll hold air. Otherwise I'll try some additional sealant.

As mentioned in our earlier reviews the 3T came with a SRAM Eagle PG-1230 11-50T 12s cassette. As Max points out, it weighs more than a pound. I found it too compromised for road-use, particularly with the 44T chainring. For this wheelset I put on a Sram Force XG-1270 10-33T. I've never installed a cassette on an XD driver before, it took a leap of faith but went on.

With the wheels on I tried shifting. Yuck, horrible. A few twists of the outer limit screw (which is on the inside of the two limit screws) and some microshift adjustments and eTap was indexing the cassette properly.

Red eTap on my Litespeed shifts very well. Shifts are quick and crisp. That bike has a medium cage derailleur and I believe an 11-25 cassette. Or something close. The Eagle long-cage derailleur does not give crisp shifts on this cassette. Shifts feel ponderous and, though they're clean they feel imprecise.

It turns out that 3T has a blog post about this! That page states:

Note that SRAM’s 10-33T cassette is too small to work with the Eagle rear derailleur, the gap will be too big

So there you go. In reality it does work, but it's not going to work well. Argh. But to add a little insult to injury:

They go on to say that the medium cage derailleur will shift the SRAM 10-42 cassette perfectly well. Well heck!

I made a big deal about the weight of the Exploro in gravel livery, at 21 pounds 6 ounces. Max astutely pointed out that swapping out a couple items would make a big difference. So let's look at what I changed and the expected impact to weight. 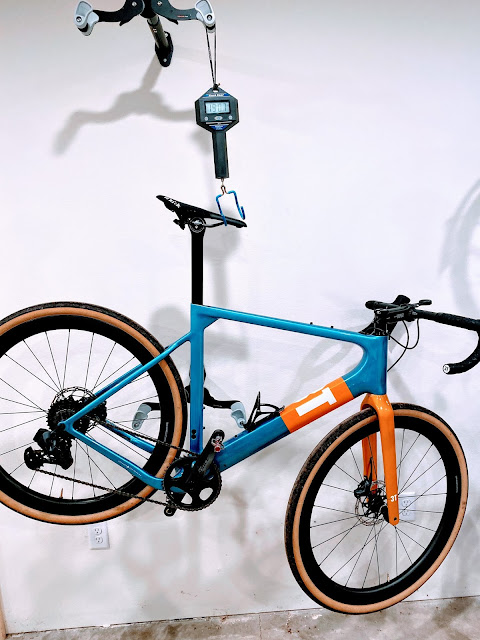 19 pounds 7 ounces. I didn't get quite the entire hoped for savings, but nearly 2 pounds is fantastic!

To be filled in after I ride it!

I've decided that I bought the wrong bike. I really like the 3T Exploro. I'm glad I bought it. But I wish I'd bought the $2000 less expensive Exploro Team Speed Force1. I'd lose the electric shifting, but would have gained a rear derailleur that's a bit more appropriate for both road and gravel. I'd have still gotten the free wheelset, so I could have a good road wheel and a pretty good gravel wheel. And a 10-42 is plenty of range for most gravel riding. 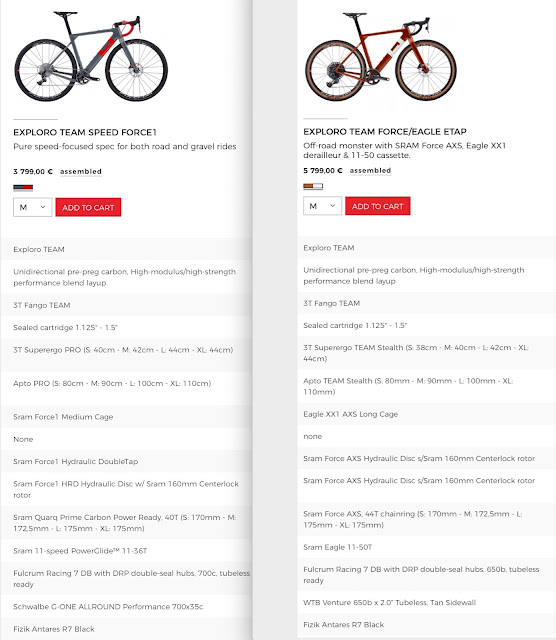 It's OK, I mean this is a fantastic bike. I don't regret it. But it's still an uncomfortable conclusion.
Posted by sam

That is an uncomfortable conclusion. I was inches from going Rival 1 when I bought this and to give credit to Dan from 3T (who sold me the bike) it was his remembering my initial query about the eTap version that caused me to stay with this one.

One thought, I suppose, is that it is not as if you don't have bikes that can take the mountain bits. What about a Force AXS RD to run the 10-33 or 10-36 or 10-42 cassette with this bike, and move the Eagle RD to a mountain bike?

On a happier note, those Barlow Pass tires look phenomenal on the bike.

Yes so I'm considering what you suggest. It makes a lot of sense, though it adds another $800 to the bill for the RD and a new gravel cassette. Probably need a new freehub to handle the 10T cog as well. And then to put the Eagle RD to work you're talking another $250 or so for the MTB's shifters. So at the end of the day you get a real nice setup, but again at a substantial premium over buying the Force1 and buying eTap aftermarket.

The Rotor 10-39 cassette is another option but that's a pricey cassette. The reality is that, while the shifts on the 10-33 aren't "good" as in $6000 bicycle good, they work so I'll probably stick with that.

Agreed that the tires look great. The interesting thing is with the deep 700c wheels and Barlow Pass tires the bike looks very similar to the 650B + WTB Venture setup.

I did find another paint chip today; this one looks like a genuine manufacturing ding, as it's on the inside of a seat-stay where I've never trod, and isn't a chip so much as it looks like there was some sand on the frame during painting.

Besides, the Rotor is pricy, yes, but also really light.

I am taking a different lesson here, which is that there is a reason for a LBS. Walk into a LBS, drop $6K, things aren't perfect, and they work it out for you. Or I assume - never done it before, and there are no more LBSs, are there?

Yeah, when I've hoped my LBS would "work things out" on a new bike, it generally meant "we'll charge you retail+labor to fit a different cassette on the bike you just paid us $3000 for". Maybe if you're lucky they'll waive the labor. Perhaps that's just Portland; maybe elsewhere they're a bit more accommodating.

I definitely see a use for the LBS if you're unsure about bike fit. I'd certainly pay for the privilege of sitting on a bike before I buy. And somehow seeing things in the physical world helps answer questions better than pictures on a webpage. But for me, getting to a bike shop that sells anything besides Specialized and Trek requires driving to the hip parts of Portland which is a 45 minute drive, my car is likely to be keyed, and I'll probably end up stabbed with a used needle. None of those things have ever happened to me at Merlin nor Competitive Cyclist.