How I got here

I've been ogling the gravel grinder segment for some time, and have even dipped my toes in the water with the Salsa Colossal and the Ritchey Breakaway. 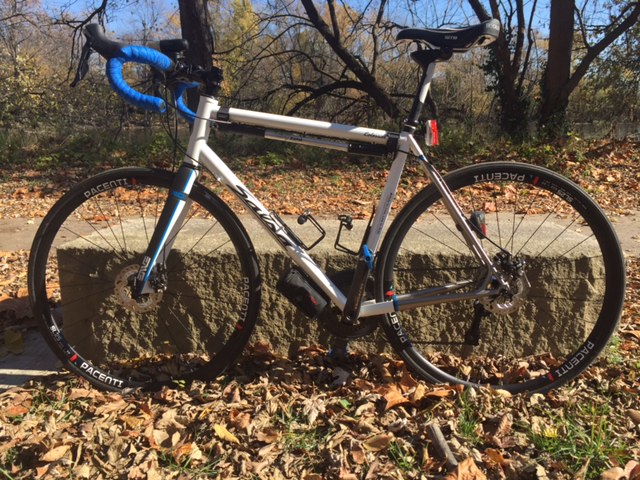 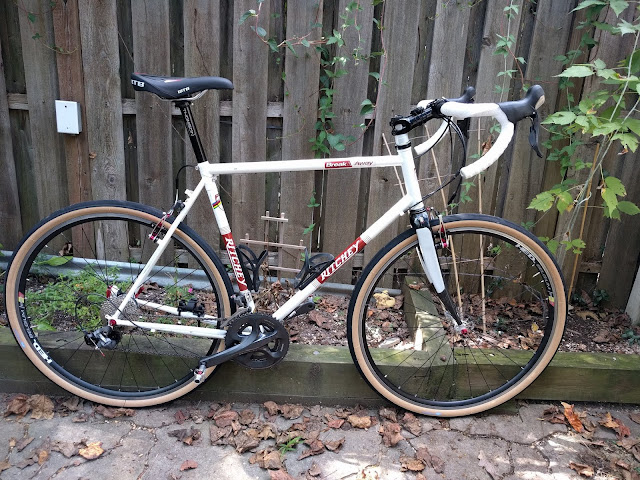 Gravel bikes?  Both work well for the purpose but neither ever got my heart racing.  Ritchey is now in the hands of another guy named Max out in Oregon somewhere and the Salsa is for sale.  (Interested?)

The best of the best

After a bit of development and innovation and experimentation and market testing, one maker - Gerard Vroomen, of both 3T and Open (the same Vroomen who's name is all over the early Cervelos) - seems to have cracked this particular nut wide open.  He is selling framesets for road-capable bikes that take full mountain-bike tires. 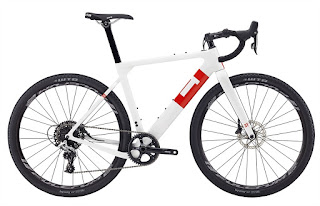 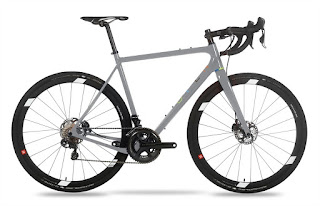 These are not cheap bikes but appear well worth what the respective companies are asking.  I'm just not in the market in that way.

The best of the rest

After these category killers there is a long list of very road capable bikes that take tires up to 42 or even 45 mm.  You can't be a major make without one.  Salsa was early with its Warbird.  There's the Specialized Diverge.  Trek, BMC, Cannondale, and the list goes on.

I did a write-up on the options a couple of years ago here.  The primary change since then is the major "grand tour" brands getting into the mix.

These are all true "gravel bikes," as distinct from the original in the segment - the cross bike, frequently turned into a gravel bike instead of a cross racing rig by using a standard crankset.  Problem with the cross bike is that it rides like a crit bike - quick and a bit squirrelly.  I never have loved the feel.

I was particularly interested in Focus.  I ride the supremely perfect Focus Izalco Max Disc in a DA build.  The current version has 6cm Williams disc wheels.  It is a marvelous bike.  The Izalco Max Disc is my second Focus - the lovely Cayo from 2013 was my first.  (Unfortunately, after an encounter with a car, that bike is now in the trainer.) 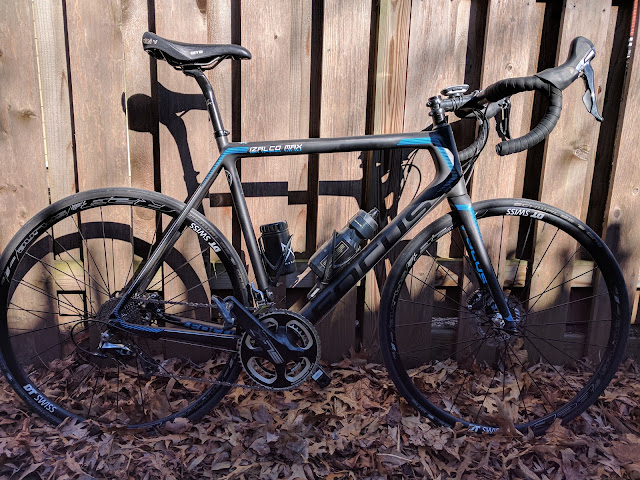 Could I keep the magic of Focus while going to the gravel riding setup?

One good question - is it necessary?  I've been riding this Focus Izalco Max with 28mm tires fairly aggressively on the towpath (see number 3 behind the link) in recent weeks.  I've even ridden single-track when needed to make a detour.  And its pretty fun.  One thing, though - it vibrates something fierce.  50+ miles of that and I feel like I've been jack-hammering all day.

And it turns out Focus has an offering in the real gravel bike space with the Paralane.  Advertising clearance for 35mm tires and long-distance geometry, it is supposed to be a "road plus" offering, equally happy on smooth pavement, chip-seal, gravel roads, rutted dirt, and where needed true muck, sand, or single-track.  Or so this video, from the Focus website, suggests:


I like that the guy who dialed him up is named "Max."

Other reviews are very strong, with the 9/10 or 4.5 stars kind of being the norm.  The only complaint I read is that 35mm is a skinny tire in this segment.  One write-up says 38mm is known by "company insiders" to fit.  My assessment, after building mine with 35mm tires, is that the right 38mm might fit at low pressures, but it's probably not a daily use option.

Focus bikes also seem to underprice the competition a bit.  The advertised price for the Ultegra build is $3500.  That compares to $3800 for Trek's Checkpoint; $4000 for the Specialized Diverge; and $4300 for the Salsa Warbird, all with similar builds.   (Cannondale's Slate and GT's Grade are priced comparably to the Focus at $3500, and I've just seen the Grade Ultegra on Jenson USA for $2200.  So there are other deals out there to be found.)

Then I found the 2018 Paralane Ultegra for $2800 new from an eBay merchant, made an offer, and got it shipped to my door for $2600 total.  While it's not hard to get deals on a bike, to be well below $3000 for a top end frameset with Ultegra build is pretty sweet, I think. 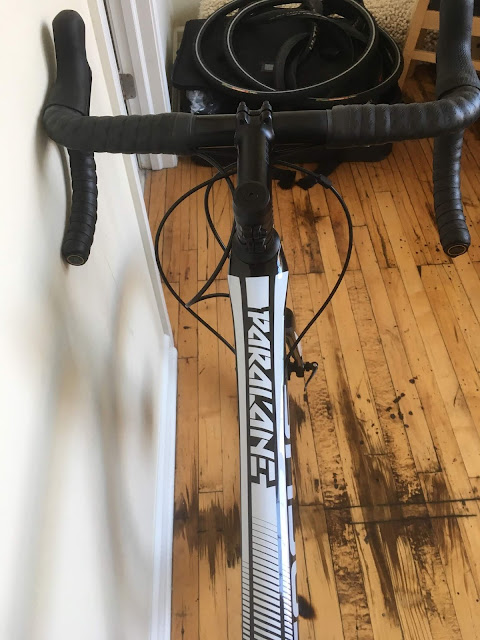 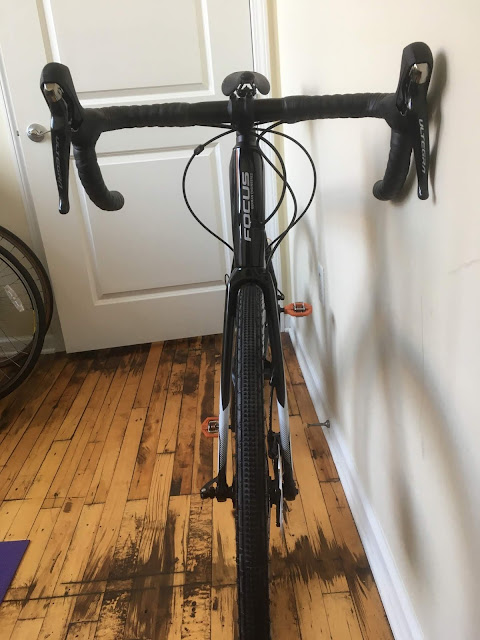 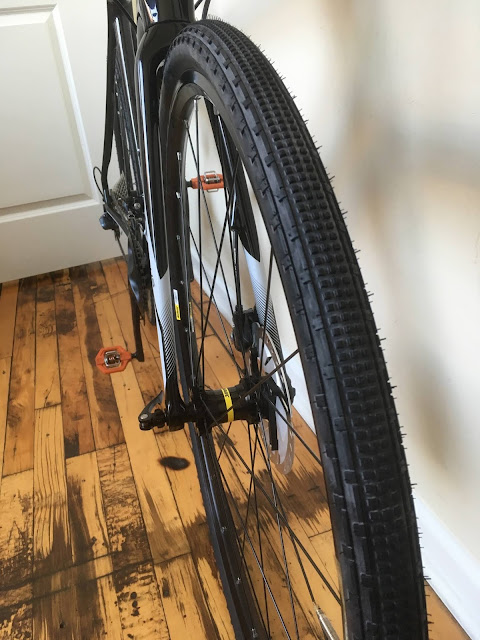 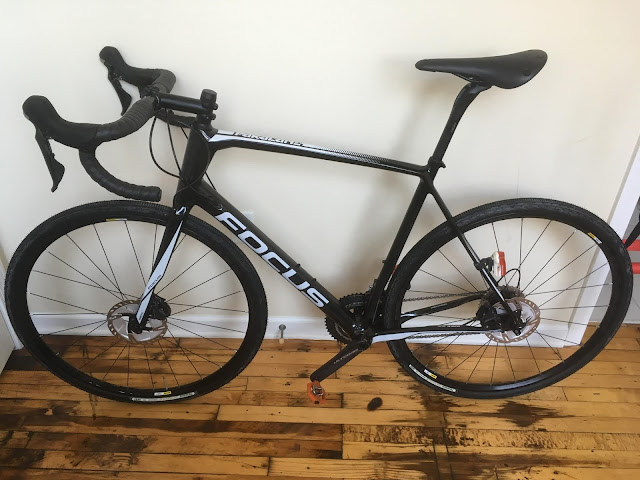 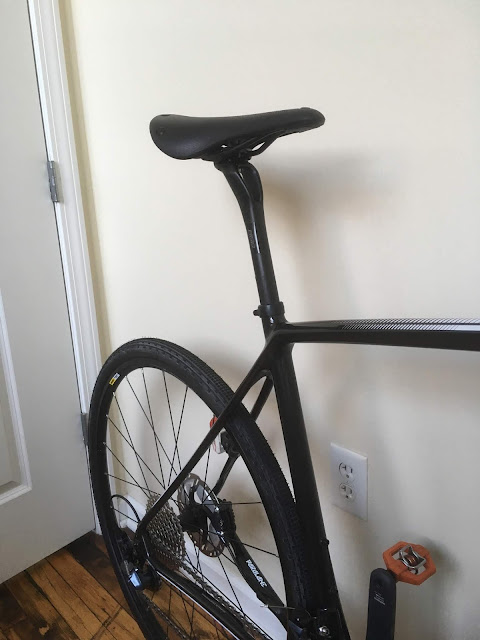 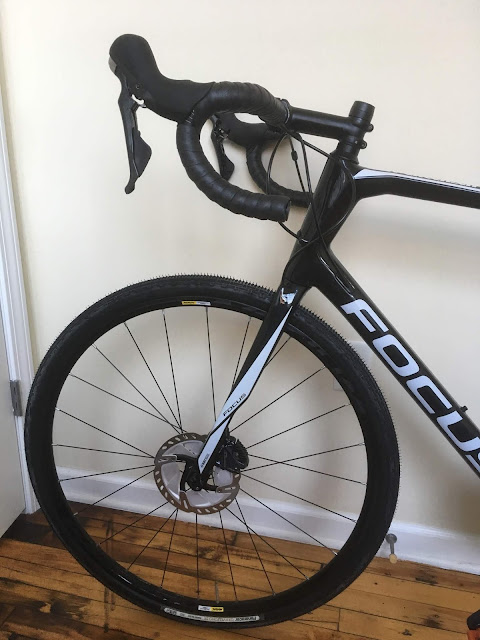 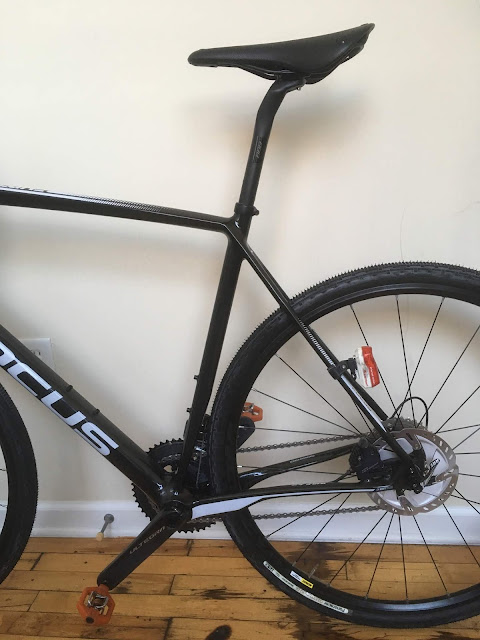 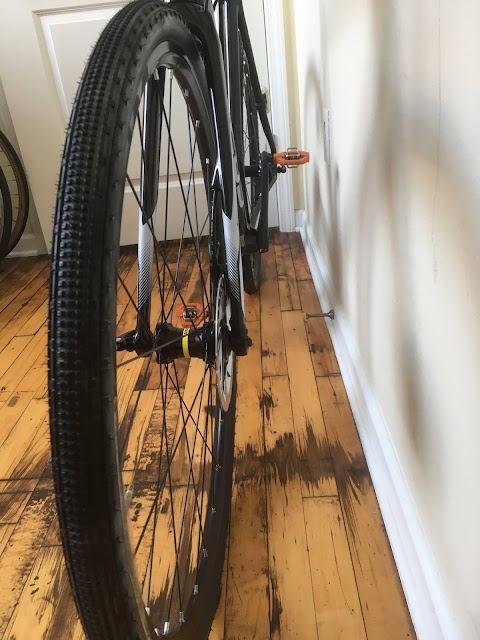 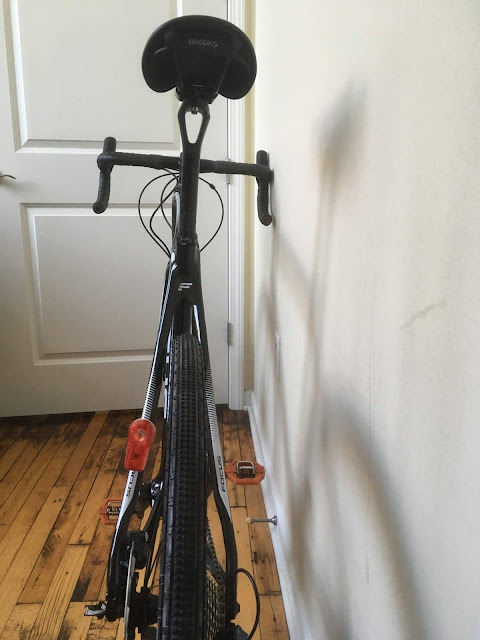 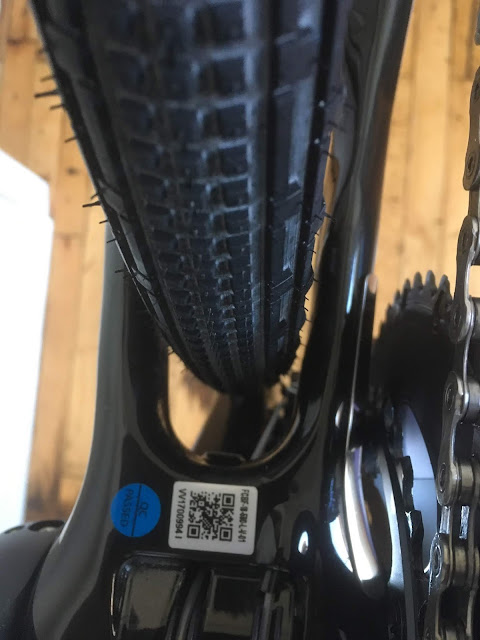 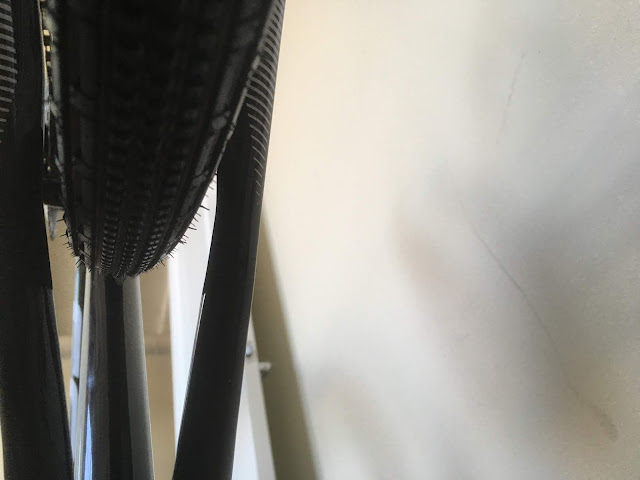 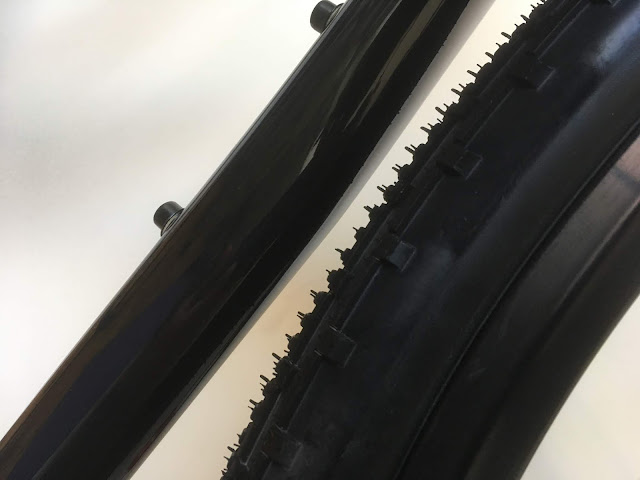 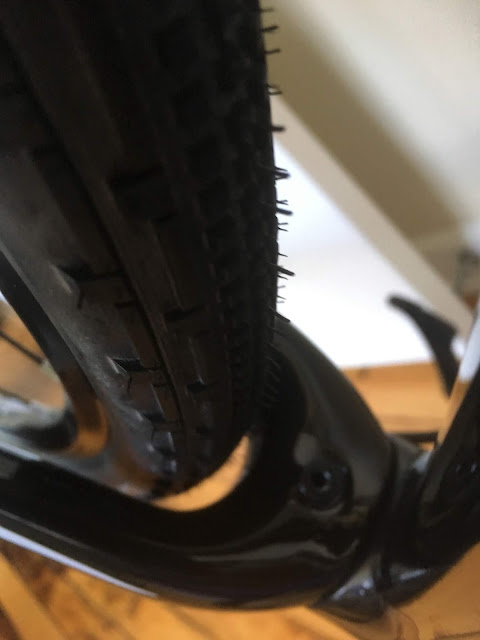 The glossy black with white graphics frameset is a little gauche in my opinion.  (Sam also bought one and has the 2017 black-on-black.  Lucky!)
The frame was apparently made in Taiwan (if the sticker is accurate).  It is a lovely carbon lay-up with beefy joints.  That front end looks a lot like the front end on the Cayo.  I have not studied this, but I have read about the Cayo in its disc brake version being a choice for early gravel races. This makes me wonder if the Paralane is just the offspring of the Cayo.

The graphics are not pretty.  Focus may build perfect bikes, but listing a minimum wage position for a graphic artist would serve them well.  (I was glad that the frame stickers were all easily removable.)

The Paralane came with Mavic Aksium tubeless-compatible wheels.  I hate Mavic on principle, but a few things to note here:
So I'm not at all unhappy with the wheels.

Bike came built with Continental 28mm tires.  Those are now on the Salsa for resale with that bike.  (Wanna buy it?)

Focus used to use its proprietary branded stem and seatpost.  This bike came with BBB stem and post, but they look nearly identical to the ones on the Izalco Max - which suggests to me BBB was always building for Focus, but is now being allowed to keep its brand on the products.  That seatpost has the built in shock absorption feature just like on the Izalco Max - not as effective as the perfect Specialized CG-R, but more comfy than most, and a visually elegant design.

Handlebars are also BBB.  That's a 25.4 mm seatpost, keeping with the common approach of skinny posts for riding comfort.  (Cannondale does this too on its Synapse.)
I changed the saddle for this Brooks Cambium that I had on the Salsa.  I think it looks good, although it adds maybe 100gms over the build-spec. Prologo.  That saddle is going out with the Salsa.  (Did I say it's for sale?)

My eggbeater Candy C pedals and rear lamp. Waiting for Elite WB cages in orange and I have Camelbak orange bottles - I think the black with orange accents look may work for a while.  It will also match my Specialized helmet.

Why are all the pictures taken inside, you ask - and in the middle of September, no less?

It's been a busy week at work and I'm waiting for the merchant to send me a replacement faceplate bolt.  So the review will have to wait for the next post.  I hope to be able to report some legit flogging the next time I write.

FWIW, my Paralane is sitting in the shop waiting some Compass Bon Jon Pass 700x35 tires. The 700x38 Barlow Pass off the Pinnacle were unfortunately a no-go.

I'm not at all disappointed to have ended up with a different frame. The matte black on black as you say looks quite nice. My 61cm frame, as shipped, weighed in at 17 pounds 8 ounces. An astounding figure for a 61cm bike with no particularly flyweight parts. If one were so inclined, I'd bet some judicious component swaps could save a pound.

I'll weigh the wheels when my new tires come in, but I will say that putting on the Barlow Pass with generic tubes pushed the system weight above 19 pounds. Still remarkable of course.

I'm only moderately disappointed that 38s are a no-go. They provided a plenty plush ride on the Archos but compared to a 700x28 from yesteryear, even a 35 holds a lot of air.

Any update on the paralane? I’m also concerned the max tire width appears to be 35. Found any 38s that work?

Sorry for the slow response. I can get the Panaracer Gravelking SKs in 38 mm if I keep the pressure below 45. It feels kind of dumb going that tight, though, on a bike that is meant to be pounded a little. On the rear that size works fine. I'm currently running 35 front, 38 rear, at 50 psi, and feeling pretty good about it.