OK, that's not the name. Too pandering. But evocative, so let's go with it as a working title. Better naming ideas requested in the comments.

You can't make money in the bike industry as a retailer any more. We have discussed that at some length on this blog in past years, primarily in response to the closing of Neuvation (later reopened as Neugent Cycles).

That is because bikes are commodities. One carbon frame is the same as the next and everybody uses one of three groupsets. Only by (1) innovating, or fake-innovating, and getting a first mover advantage; (2) building a brand name by sponsoring, e.g., Lance (before you later drop him like a turd); or (3) designing something unique and convincing people it is cool -- the Boulder Cycles approach -- can you actually achieve normal profits.

And the retailer, well, forget it. In a world in which we get our education on Youtube, there is no value added at retail except convenience. Which is not worth the cost of keeping a storefront open.

How do you make money and keep yourself in the bike industry, then?  One way: selling a lifestyle. Compass Cycles has actually pulled this off, by all appearances.

Not much of a biker here, but I do one thing that I think people would find cool. I buy a six-pack, something good, and disappear into the basement to watch "Bicycle Dreams" while rebuilding a bike. Strip down the frame, wash and lube the components, wash and wax the frame, grease the threads, pull out the torque wrench and put it back just so. I've blogged that process a few times recently and, if I do say so myself, it makes for some drool-worthy results.


OK, one other thing.  I surround myself with bikes. Not the usual N+1 story of race bike/commuting bike/rain bike, but like a dozen in any one place at any one time. Here are some pics from the condo in Indy. 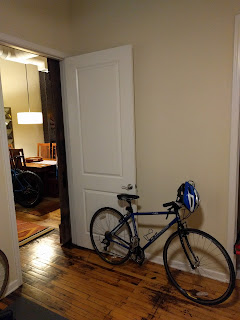 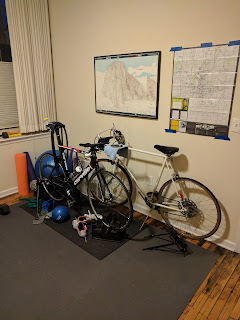 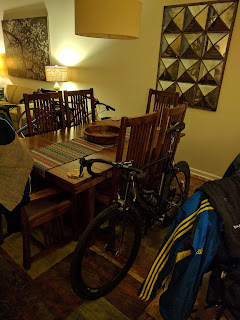 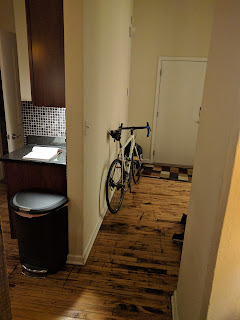 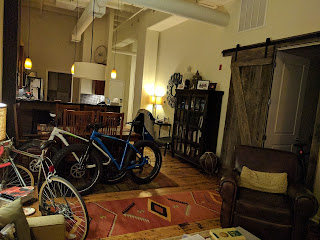 Too much? Probably so, for a house. But not for a shop. (And, in truth, I think not too much for a house either. Some people have artwork. I have bikes.)

Bring these together:
Rent (or buy) this place:


(Look closely at the above: cut a hole in the blue wall and install a big barn door; install a wrought-iron fence; patio seating in the loading dock driveway; loading dock still accessible for bringing in Ryder trucks full of random bike stuff. Big sign, "Hipster Bikes and Beer" above front door. Office and bathrooms in back, bar in middle, bike work-stands in front by windows. Plenty of standing-height tables to mingle and watch the tube or watch others build bikes.)

The warehouse is close to lots of residential housing.

Basic lifestyle sell: drink a beer, build a bike. Pay for what you drink or use, tools and advice free. Need the bike finished? Leave it and pay basic mechanic rates. Already have a bike? Bring it in and work on it yourself, or let us work on it while you drink beer.

Bring in "programming." Mechanics teach courses on stripping and cleaning an old bike, repacking bearings, building vintage and building modern spec. Local bike phenoms talk about their latest adventure. Chris Hopkinson rides on trainer on the bar for an entire week, fueled by nothing but beer. OK, maybe only that last is realistic.

Sell ironic t-shirts and trucker hats. "Hipster Bikes and Beer." And a play on the old Hard Rock shirts, but edgier: "Indy." "Stockholm." "Juneau." "Beirut." "Detroit." "Tehran." "Marrakesh." "Kinshasa." OK, maybe that last is too far. But you get the idea.

Could you make it work?

Pure back of the envelope guesswork here. Please throw darts.
In total, I count $14K or so for each of the first six months.

And if the place works, $15 net per t-shirt ($10 net per trucker cap) sold. Can you stick the shop name/logo on a local brew and get a discount from the brewer?

On that theory, the place covers costs before making any money off the bike part of the business. Not a gold mine by my accounting. But maybe worth it?

Ideas in the comments, please!!!
Posted by Max

I think the idea has legs, or wheels as it were. The startup costs are daunting, and I think with the idea (pick parts and build a bike) you're talking a lot more than $3000 there. Maybe $15,000 to get a reasonable selection of stuff.

Maybe you start a little smaller. A few workstands where people can work on their existing rides, using tools they might not have at home; headset press, etc... Block off the back portion of the building to start, because you don't want a bunch of vacant space.

If you get much business, you might be able to get a couple food trucks to park outside, but your delivery model is probably a better idea.

I'm guessing you're looking at more than $10/hour for the type of worker you'd want. Probably double that. But maybe that's the Portland in me talking.

30 beers on tap.. I don't know what it costs to set that up.. You really think only $6K for that? My guess is much higher.

That building.. Sure you want the look to be rustic, but rustic is an intentional look. Rats in the corners don't qualify. So there's some serious renovation costs there.

My guess realistically is you've got $200K+ in initial costs to get it off the ground. Which certainly does /not/ mean that it's not viable.