Eleven speed cassettes have convinced some that a single front chainring is a realistic choice.  With cassette ranges going as big as 11-36 (road) and even wider for mountain, a single 46, 48, or 50-tooth ring up front is usable on even varied terrain.


The most lovely road 1x that I know is Specialized's super-sweet Allez.


I keep the Neuvation full-time in Indianapolis where a hill is what an ant makes in loose dirt.  If I'm really mixing it up I may go through four or five gears in the rear, but I never, and I do mean never, drop down a chainring.

So what the hey.

I selected the Sram chainset.  One thing I like about Sram:  the components look pretty badass.  Campy is pretty and Shimano is functional.  Sram is what John Travolta might have mounted on his car in the musical Grease.


Two ways to achieve a 1x

Sam gave me the options when I first went down this road.

First is to replace the existing double rings with a single 1x ring, keeping the same crank.  You can find a 1x ring, even a Sram ring, for a reasonable price online.  The downside, of course, is that you lose the benefits of the centered chainring for chainline purposes.

The second option is to replace the entire group.  I was able to piece together the entire Sram Force 1x group for about $700 with parts from different sellers.

There is a non-option:

The choice that seems obvious but is not is to keep either your outer or your inner ring and just remove the other. The problem is that chainrings on 2x or 3x cranksets have "ramps," which are tapered teeth designed to make it easier for the chain to move between rings.  Sam tried the "just remove one ring" approach on a single speed several years back and found it prone to derailing.  (There is an old story about a TDF mechanic removing the front derailleur to save weight, and the rider's -- it may have been Tyler Hamilton -- derailing without the derailleur to help guide the chain.)


Cheap but not that cheap

I took a  different, third, tack with the Neuvation.  Instead of a wholly new group, I kept the 10-speed Shimano rear derailler, which works like a charm, and simply replaced the chainset with the Force 1x.  I kept the 172.5mm crank-arms, because I like to really spin it up in the stoplight sprints.  I went with 52 teeth front.  I mean, if you are going in, go all in.

The Sram Crankset cost $250 from Art's Cyclery.  For $150 you can get the same thing in Rival.  I probably should have done that.

Those are the original S-105 brifters.  Shimano does not make the ergo-lever for the left like Sram does, so I just removed the shift cable and called it a build.

Going 1x means no front derailleur!  That permits you to pull the derailleur cable as well.  In my case I left the housing, trimming it at the end of the handlebar tape.


Of course, you need to break the chain to remove the derailleur.  The old days of front derailleurs that can themselves be taken apart are gone, probably for the better.  When you are going to reconnect the chain using a quick link (which I recommend), you have to remove the "outside" link at both ends.

With the front derailleur gone, I was happily able to remove the "braze-on" mount, which on the Neuvation is really a bolt-on mount, producing a nice clean BB cluster.  Most modern bikes seem to have clamp-on front derailleurs which would be even better, leaving no bolts remaining.  It would be a tad annoying to make this 1x switch with a true braze-on.  You would be left with the mount.  Not that it matters, but it matters a little.

At the end you use the quick link to reconnect the chain. 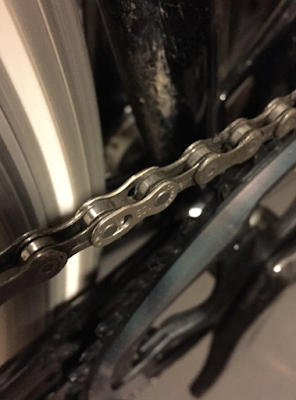 Interesting factoid about the Sram X-Sync chainring:  it has an intimate fit with the chain.  I am accustomed to simply laying the chain over the ring and its meshing with the teeth, ramps and all.  With the X-Sync I had to guide the chain onto the teeth.  I almost thought the warning "Sram Chains Only" printed on the ring was accurate.  Of course, it is not.

Then I put the quick-link in place and prepared to step on the pedal to tighten.  (The link needs to be engaged with maybe 30-50 lbs of force, more than I can apply by gripping the chain and pulling.)  I accidentally turned the pedals before the engagement step, running the chain over the ring.  Lo and behold, the X-Sync ring engaged the link on its own (see picture).  I may find on the road that the engagement was not robust, but it sure looks fine to me.

It is a nice, clean-looking build, all put together.  Total time required <1 hour, and that includes making and drinking four cups of coffee.  Total cost $250 -- just the new Sram Force X-Sync chainset.


And here is the bike 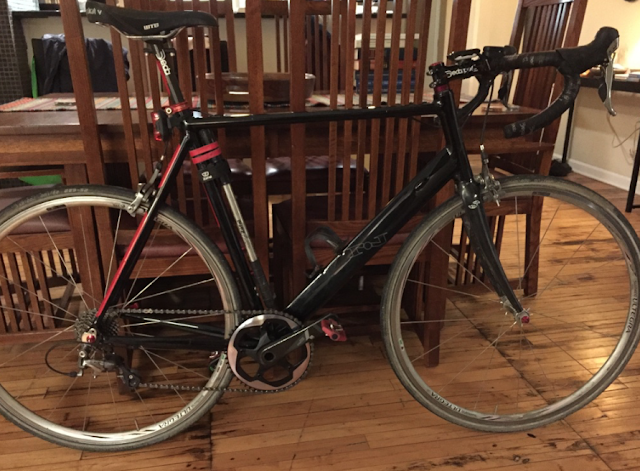 It looks fantastic. No secret that I'm a huge fan of the 1x setup. All the mountain bikes in my garage are 1x, and I'm sure a couple more of the road bikes will follow your lead in the near future.

At $150 for the Rival option, that seems like a worthy alternative to just replacing the chainring. The better chainline and cleaner look are real benefits. Brave move going with the 52T, but in Indy I really can't argue with it.

One thing I've noted recently on my cross-check 1x is I'm getting a lot of chain-slap. I can't imagine that's in any way due to the 1x though. All I can figure is the spring in the derailleur is getting weak. (Does make me wonder if one should winter their bikes in the small cog to decrease spring tension?)

I've been wondering that same thing. Like releasing binding springs in the summer. I do note that the Seam 1x derailleurs are clutched, probably because of the large range on the cog. Not an issue with my 12-25 here.

It seems like the obvious way to go in many circumstances. Although, interestingly, the 1x movement is gaining speed at the same time that Di2 is effectively eliminating many of the headaches that accompany front derailleurs. I think a number of pro triathletes are now racing on a 1x, reasonably assuming that they'll never be in a small ring. I guess you can also get a bike a little lighter that way. Perhaps ultimately we'll wind up in a world where the mechanically inclined choose a chainring and cassette depending on terrain. That would be rational.

I think with a 10-cog cassette one can make an OK case for 1x for a commuter. 11-cogs give you a good case for a single-purpose bike (triathlon, hill-climbing, etc..). 12-cogs will pretty much let everyone except tourers or really weak climbers drop the FD (and a weak climber could presumably still get a bail-out cog).

Not because of the increased range, but because that will bring the jumps between gears down low enough. For MTB, getting the perfect gear isn't as important, so 1x has already captured a huge portion of that market. But for road it's nice to have a little more fine-tuning of cadence.

Agreed that it's interesting this is possible right as front-shifts have become such a non-issue. Even moreso on MTB where the smaller chainring jumps can make the front shift almost invisible. You still get the weight savings, the presumed cost savings, and the simplicity (fewer things to break) which makes a compelling case regardless of the front shift quality of course.

There is another asymmetry. The true advantage of a single ring is, I suppose, weight and elimination of the danger of dropping a chain. Both matter when you are shifting a lot (weight because you are climbing and descending, dropping a chain happens under hard shifts). But when you are shifting a lot is precisely when you will more likely need the broader range and greater granularity that 2x gives you.

I could have used 1x in Natchez (until that final "hill," I suppose!), but precisely for that reason there was no need for it.

At bottom, of course, I just think it looks cool.

At Sebring, I'm not sure I'll use more than about 3 gears over the course of 24 hours; a single-speed wouldn't be a huge disadvantage. (Of course, it's important that those gears be tightly clustered.) I doubt I'll record a front shift.