I've used cheap bike workstands forever. Mostly of the tripod variety. They work OK, but there's always one compromise or another.

Recently I've had several simultaneous bike projects going on, and constantly swapping bikes has become a bit of a hassle, so with the need to pick up another bike stand anyway, I figured I may as well finally get a Park Tool stand. The PCS-10, to be precise. 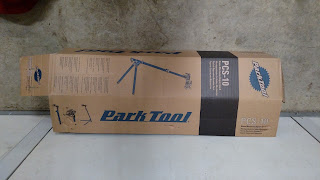 The PCS-10 comes moderately disassembled. I guess they figure that assembling the stand is a skill filter. Anyone who can't do that probably shouldn't be working on their bike anyway.

One of the real advantages of a Park stand over a cheapo Forte or something is the seat-tube clamp. The PCS-10 clamp has a nice cam action to quickly clasp and release the seatpost, and a little round thingy that enables 360-degree rotation.

Inserting a bike is about what you'd expect.

The stand is surprisingly sturdy. I didn't expect much, but the moment-arm is long enough and the tube angle steep enough that there is really no inclination for the bike to tip. Quite refreshing after my tripod stand which seems always ready to tip over.

While I was at it I also got the Park Tool 106 accessory tray. To be honest $30 seems a little expensive for some molded plastic and bent metal, but it would cost me a lot more than $30 for a far inferior solution if I were to try to make my own.

Assembling it was even easier than the workstand.

The accessory tray integrates directly into the quick release collar on the PCS-10 for a sturdy nut-/bolt-/tool-storage location.

My verdict on the PCS-10 is unabashedly positive. Yes, there are cheaper repair stands. I've had three, and they all worked, but none were as stable or as well built as this one. There are also more expensive repair stands (many of them from Park Tool in fact!). When I get a larger garage, I'll probably get one. But the PCS-10 is a solid mid-range workstand that I can imagine lasting for many years.

Before I forget, though, there was one problem. The repair stand did not come with the required nuts to hold the legs in place!

Now that's a pretty minor problem. I'm sure I can find them at Home Depot. Still, annoying that they're missing.

I agree, they're nice, simple and seem durable, over time I've come to actually prefer the even simpler screw in clamp of the PCS-9 but you can probably use the PCS-10 clamp in the same way I'm guessing. I reckon that preference was because I have all sorts of different seatpost diameters and it's just more efficient to screw down all the time than test the cam clamp strength after two or three adjustments.
I have found that that the Park stand will get a little tipsy if a heavier bike isn't oriented a bit to balance a little more weight between the floor support arms when the rear wheel is removed.