It's been a frustration because while I like the walk, I would really enjoy commuting by bicycle.  Goodness knows I have plenty of bicycles that would work well for the purpose.


One approach would be to add extraneous miles just to make the ride worth-while.  Another would be to consider the shift to cycling to be more general:  cycling to dinners out with friends, cycling to dr. appointments, even cycling to and from the airport.

Last week I took the plunge.

I'm riding the Neuvation, which has been sitting around, occasionally on the trainer but mostly leaning against the wall, since I built it.

I swapped the wheels for my old Ultegra 600 hoops, the pedals for eggbeater semi-platform (Candy Cs) pedals, and added a PBW taillight, a Serfas 500L headlamp, and a seat-stay pump for faster inflation.  The bike looks sweet in shiny black and it rides smooth -- although it is not the snappy performer that the new Focus is.

Over the years I've acquired a good collection of commuting gear.  I've become Showers Pass's dumping ground for clearance outerwear and in the cool fall weather I've been wearing a nice soft-shell with reflective accents on the fold-out tail flap.  When it gets cold I have pants to match. 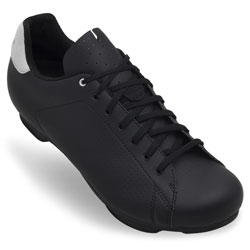 And I took the plunge on new shoes -- Giro has a great line of cycling shoes that look not unlike casual wear, including these "Republic Touring Shoes."
Good for cafe use.  I picked up a cable lock -- good enough for temporary use while getting something to eat but nowhere near enough for overnight use.  Finally, a shoulder bag:  I'm almost ashamed to cop to this one, but it is visible, and I got it on clearance at Rapha.  So here's the collection.

I started with a ride to and from work.  Not, I must say, particularly exciting.  But there's a caveat:  riding in a city is sort of like running on a trail or skiing in a terrain park.  It's an all-senses and all-body experience, what with reacting to real or perceived threats, navigating poor pavement, and spinning up from a start at every stoplight.  And because I was replacing a 25' walk, I could add a few miles, heading south to the edge of town, west across the river, and into work across the campus. I could also stop for coffee and an egg-white wrap.

My former colleague P__ invited me to a soccer game at Butler, where he now teaches.  I left the condo at 7 pm and rode north on small roads through town, enjoying a rare night-ride when I wasn't already 200+ miles into the day.  It turns out that while the major arteries through town are vaguely unpleasant, the smaller neighborhood roads are downright fun.  It would be annoying if you were trying to get somewhere -- nobody likes cross-streets on a brevet -- but for a 5 mile trip north the jaunt through town was a nice diversion.  Butler tied league rival Depaul, we went out for a beer, and I headed home around 11 pm, confident in the PBW taillight and increasingly so in the Serfas headlamp.


The dean held a faculty social on Sunday.  He lives in Carmel, 12 miles north up the Monon Trail before heading west for a few miles.  With the cooler weather, I could even dress in khakis and a sweater without concern for unpleasant sweating.  Or at least not that anybody was gauche enough to point out.

One day I decided to explore the extension of the White River bike trail south from town to its end at Harding and Raymond streets. 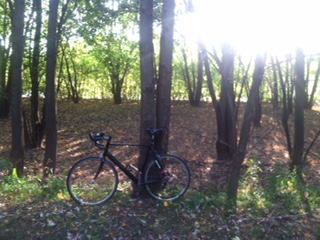 I had the trail to myself.  It wasn't all perfection; on one stretch you get a strong stench of malts from a nearby brewery.  On a short stretch you are aware that you are about to cross some waste-water effluence -- and a well-timed bunny hop is essential.  But the good outweighed the industrial.  Here was the view through the trees, east toward the river with the sun still low in the morning sky.

After getting in trouble with Eli Lilly security for riding through a Lilly employee park, I turned up Harding Street back toward town -- just a tad too early.  South of Highway 70, Harding Street looks like this:

Note in addition to the three lands of traffic the double-exit lanes and lack of a shoulder.  Remarkably, nobody honked, nobody tailgated, and nobody passed in ostentatious frustration.  A yellow bus of kids comprised the only aggression, and that was aggressive waving.

After crossing Interstate 70, Harding turns to a quiet street through a run-down industrial hood.  There was something poetic about the scenery. 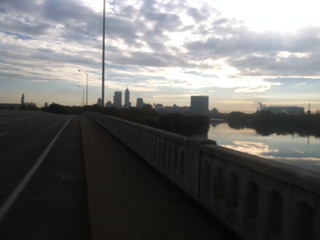 Finally, a turn back east toward the law school, crossing the White River on New York Street.  Photography into the sunrise with an iPhone 4 is terribly imperfect, but you get the idea.


One last:  back in DC I did a trip around Northwest over an hour or so on Saturday.  Here's the Gunnar at my favorite cupcake-and-espresso store Sweet Teensy.


And with today we're into week 3.  On the way into work I've made a semi-habit of following Washington Street across the White River, rounding the Zoo, and returning back east on New York to the law school; the rides on Washington and New York give me a few miles of high speed riding to get the day going.  On the way home I'm checking out Indianapolis neighborhoods that were too far to walk but too near to drive.  And I've discovered something intriguing.

Portland's status as a bike mecca is legendary.  Cities around the country have talked the talk of doing what Portland has done.  To it's massive credit, Indianapolis -- this backwater of a car-crazy, mid-sized midwestern town -- is on its way.  We have bike lanes everywhere.  I've blogged about the silly Pacers bikeshare stands -- but they are getting used.


The town has microbrews coming out its ears:  dozens of small shops selling small batch beer.  Patrons pull up on bikes, fill a few growlers, and pedal away.
There is a huge bike commuting scene.  The Monon Trail brings hundreds of commuters daily from the northern suburbs into downtown, where they park at the Indy Bike Hub, shower, and walk to work.

And though it's 10 years late, there is a substantial fixie culture of would-be Brooklynites riding up and down my street -- Mass Ave -- at night.

We may be a few years late to be at the leading edge, but I'm a big fan of the Portlandification of Indianapolis.  In contrast, DC is well ahead of that game but is not doing as well, suffering from poor road surfaces, a tad too much crowding, and too high of rents for the ironic crowd to live in town.

A few lessons and ruminations

Clip in shoes really are that much better.  I started with loafers or tennies on platform pedals.  Clipped in I rediscovered my track stand and the ability to beat a car off the line.  In short, with clip-ins you are riding, while with platforms you are just commuting.

I wonder if I look ridiculously old when riding around town -- because it does make me feel young.

There is none!  I realized one day while sprinting across the White River with the sun at my back and my lungs filled with cold air that I have always loved riding places.  Together with Sam and S__ I grew up riding to school, to work, to swim practice; Sam and I both pulled the lawnmower around the neighborhood for a short-lived business venture behind the red Schwinn World.  In college I rode to class, up, down, and around the obstacles on the Cornell campus, on a steel-framed hard-tail Novara mountain bike -- right up until it got stolen off of a college-town porch.  Even in DC after first building the IRO fixed gear I played faux bike courier, dodging cars and pedestrians through downtown on the way to work or to meet a friend for a beer.

Somehow I lost touch with the sport and when I came back to it, riding was about spending all the daylight hours, and some of those after dark, covering as large a section of the map as I could.  No dig on going long, of course, but when I found myself declining to sit astride a bike unless I could stay on for at least 25 miles I found it increasingly hard to ride at all.

Sam and I had a discussion over the summer about trying to ride daily for a month.  I even targeted August as the month to try.  I did not get even close.  By contrast, I've been riding 6 days/week for the past two weeks and not even feeling like it is hard work.  Total mileage may be on the low end, but I'm pleased at how easy it is to surmount the barrier to entry imposed by getting the bike off the rack and buckling a helmet.

I'd like to ride to and from the airport for my weekly commute.  Why not?  I only travel with a shoulder bag anyway and I'd be saving at least $36 in parking every trip home.  It's about 15-20 miles each way and can be traversed on surface streets.  How to lock a bike there is a tad less clear.
I recommended to the Indianapolis airport that it install a safe bike-lock area in the garage and just today received this reply: 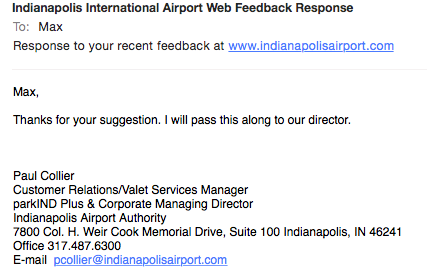 $10 says I'm the only person ever to suggest this, so I am not holding my breath.  Mind sending Paul Collier an e-mail to add to the encouragement?

I'd like to increase my sphere of comfortable commuter travel.  If the airport and the dean's house is possible, why not a ride 30 miles to Columbus, Indiana, to see the famous architecture; or 70 miles to Bloomington for a meeting or to catch a performance at the music school; 125 miles to Cincinnati to visit friends; or 180 miles to Chicago for the conference I attend each year in April?

I'd like to sort out the commute-to-nice-events problem.  Will a jacket, tie, and shoes in the satchel do the trick?  Any way to solve the problem of the goat-herd smell?

Grocery shopping?  The obvious answer is a rack and panniers, but that kills the pleasure of riding.  Micro-shopping with the shoulder satchel?

Riding in the dead of winter?  People do it, but usually on fatbikes or cross-bikes with studded tires.  Can I keep riding 25s on the Neuvation?  Taking corners would probably be a slower process.

And once I get these worked out I'd like to see how long I can go without needing the car.  Not planning to sell it any time soon, but think how cool not driving it would be.
Posted by Max

Congrats on the commuting.

It's funny about commuting. While heading out for a 60 mile ride is not a big deal, getting into the mindset of commuting is a completely different thing. A 1.25 mile ride is pretty sweet, but much further and you have to worry about carrying clothes and a laptop in the rain. And for some reason a point-to-point ride is a different thing than just out wandering around.

Glad to hear you got over that hurdle. I hope to follow suit one of these days!