The editorial team here at HBC recently attended an off-site team-build event, driving from the Northwest (which was experiencing unseasonably and uncomfortably hot weather) to Utah and Colorado, to enjoy some beautiful scenery and wonderful climbs.

The initial plan, as proposed by Max, was to complete The Grand Morango, a 3-day loop covering approximately 400 miles from Durango to Grand Junction to Moab to Durango (or any combination thereof). Unfortunately due to a lack of fitness on one participant's part, the initial plan was sacked in favor of shorter local rides.

That said, it was not a total loss. In fact it turns out that some scouting was probably a good idea. At least a portion of the Grand Morango would have been a challenging and hair-raising experience, with large climbs and fast descents on a highway with virtually no shoulder and massive drop-offs.

The first day we started out on one of my favorite Moab road rides, a roughly 60 mile loop up and over the La Sal Mountain Loop Road. The stretch out to the loop road from Moab was frustrating. The first 10 miles has a stealthy 1000 foot climb and that, coupled with a headwind, made for a really slow start.

Once we hit the real climb Max noted some ominous clouds in the distance with accompanying thunder and lightning. We decided to climb as far as we could while still feeling safe, and ended up turning back after the first sustained pitch. Could we have gone further? With the benefit of hindsight, probably. But at the time riding on metal bikes high on a mountain during a lightning storm seemed like an unwise way to start the teambuild.


Regardless, we did get a respectable 2300 foot climb in over 30 miles.

For day 2 we headed up to Delta, a few miles from the start of the Grand Mesa climb. Grand Mesa has two routes, North from Mesa and South from Delta. I'd previously ridden the North side, so Max and I opted to tackle the South side for this ride.

After stocking up at the local Safeway we headed out with a short jaunt along Highway 92 before turning onto the climb. The trip started out inauspiciously, first with Max getting a flat tire about 10 miles in, followed by gum on both tires after another 5 miles. While getting the gum off his tires, I flatted. Our stash of 4 spare tubes was suddenly looking optimistic. Fortunately our only other flat of the ride occurred near the top of the climb.

While the North side of Grand Mesa is steep and switch-backed, the South side is a steady and reasonable grade. One can easily develop a rhythm and just keep on keeping on, all the way to the top. As we climbed the hot temperatures of the valley gave way to cooler alpine temperatures, bottoming out in the mid 50s with a pleasant wind. 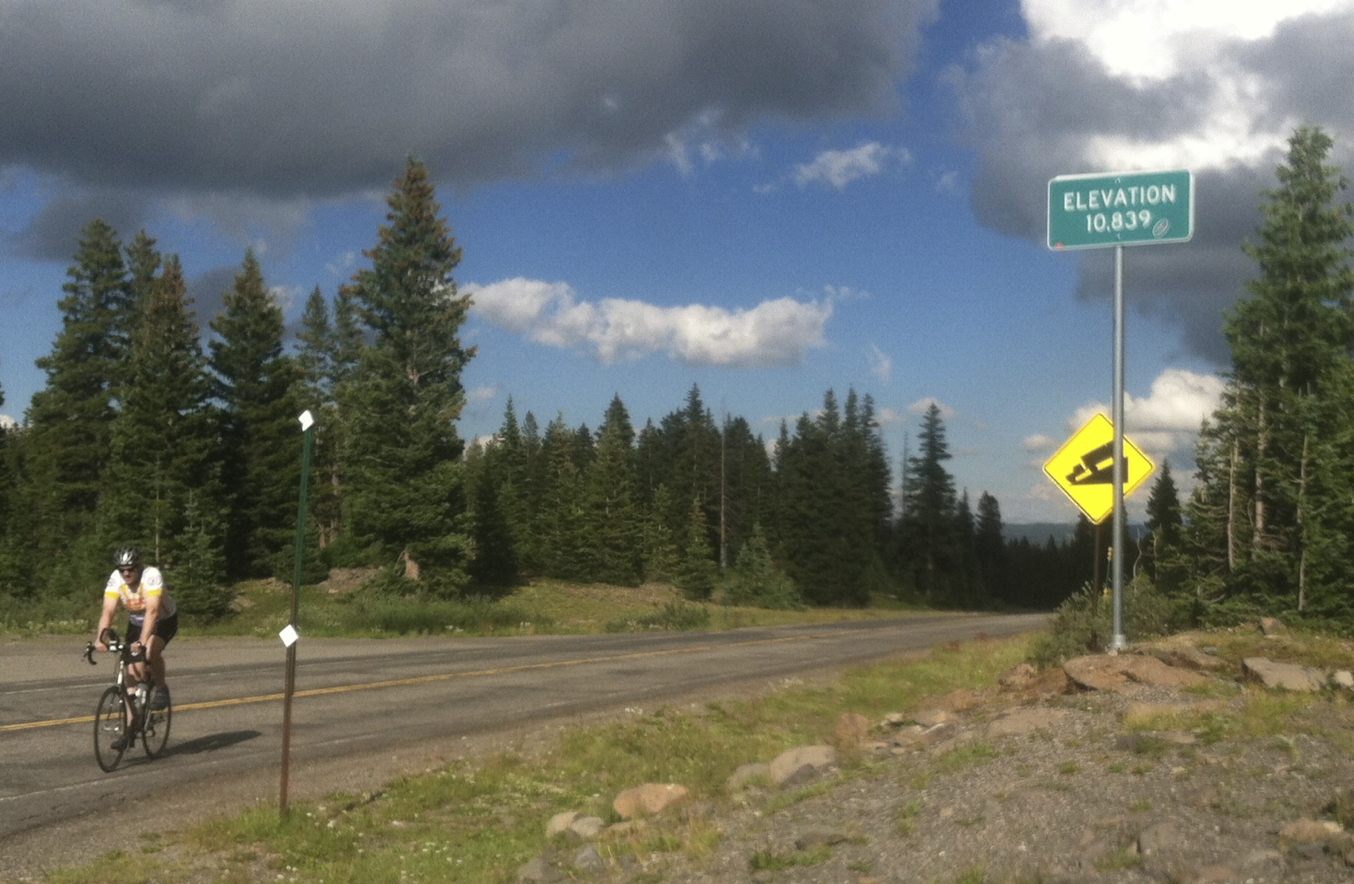 My recollection of the descent on the North side was that it was a rip-roaring fast descent, but with numerous switchbacks that required deft braking. Not so the South side. Brakes were entirely optional, and neither Max nor I partook. The 6000 foot descent was glorious, with perfectly engineered curves that allowed one to carry momentum all the way back to the highway. We traded off taking the lead as it is honestly quite challenging to hold an aggressive tuck continuously for 30 minutes.

This was a great ride.

Day 3: Black Canyon Of The Gunnison

While I'm pretty sure that Max had another tough ride in his legs, Strava told me that I should take 3 days off after day two's climb. So we rode into the Black Canyon Of The Gunnison National Park. What a remarkable feature! The canyon is blacker than the Grand Canyon, though also quite a bit less grand. The day started with a terrifically challenging climb into the park and then some pleasant rollers up to the appropriately named "High Point". We took the opportunity to stop where-ever possible to admire the scenery, including several short hikes off the road to viewpoints.

The short 23 mile out and back provided 3200 feet of climbing, but the scenery made the climbs seem even smaller than that. The ride down from the park entrance was again delightful, losing nearly 2000 feet of elevation over about 6 miles.

After taking a day off to drive back to Durango, we planned a short ride out of town. Durango is surrounded on four sides by mountains, and we quickly realized that even a short ride in Durango is going to include at least a thousand feet of climbing. As it was, our jaunt along Highway 210 next to Lake Nighthorse (a wonderful rolling ride with great scenery and good road conditions) and brief tour through a couple mountainside neighborhoods in Wildcat Canyon provided 2000 feet of climbing over 25 miles.

The ride out of Wildcat canyon was really something special, with a slight downhill and moderate tailwind that let us maintain a 30+ MPH pace for many miles.

After several days of taking it easy, we decided to tackle another significant climb before the week was out. Colorado has no shortage of long passes, but we had a specific destination to attend a family reunion, so our options were mostly limited to climbs between Durango and Estes Park.

Some quick internet investigation pointed to Guanella Pass. Until recently the road surface was horrible, but a couple years ago they re-surfaced it and by all accounts it had become an extremely pleasant ride.

We drove to Georgetown, a touristy town at about 8500 feet, and parked at the Visitor Center (a mistake for which we would later be gently chastised, by a friendly older fellow wearing a train conductor's uniform). Heading out of town the road quickly turns vertical, with a 1500 foot gain over the next 3 miles. Along the way we encountered some bighorn sheep grazing on the side of the road. Bighorn sheep are named thus because they are sheep with big horns, a fact that was not lost on us as we checked our 6:00 until safely out of range.

The road up Guanella Pass is a launching point for many Mt. Evans ascents. As such it was littered with cars (and tents) on the sides of the road, but traffic headed up was sparse. What traffic existed was extraordinarily courteous, and the entire climb was pleasant and scenic. Before we knew it we'd reached the top at about 11,600 feet. Surprisingly there was no elevation sign, so we headed down the other side a ways to make sure we hadn't reached a false summit. I strongly suspect that Max was willing to ride all the way down to highway 285 to get another good climb in, but I was having none of that. We turned around when it was clear that our original summit had been successful. Including our short descent on the other side, we covered 26.7 miles and a bit over 4000 feet of elevation. The climb was absolutely lovely, as was the descent.

We rode a lot of great roads and several wonderful climbs. One could argue that a route should ideally be more than just a climb and descent, but as Max pointed out, with limited time it's useful to get the most memorable experience out of a ride. And each of our rides were memorable.

There are a lot of fantastic routes in Colorado, and we're already looking ahead to next year's event. Mt. Evans is certainly on the list, and though we've heard mixed reviews of Pikes Peak it at least warrants some investigation. Another recommendation was Independence Pass, and Loveland Pass seems to be popular as well.
Posted by sam

Sounds like a pretty enjoyable series of rides, and one that threatens to be considered sane by our standards. I've never turned a crank in Colorado.

Well written up -- and well clumb. It is a great way to see a region. Drive or sleep when you are tired, climb when you are not. And we could spend eternity doing it without leaving Colorado. Come to think of it, that sounds pretty good.