I headed to Saratoga with M__ last weekend for the 2014 edition of the Saratoga 12/24, put on by Adirondack Ultra Cycling and its leader and race director John Ceceri.  We met Damon and A__ there, with D__ considering a reprise of his record-breaking ride in 2012.

Damon and I rode this in 2012.  I had no idea what to expect that year and thought 200 miles would be a pretty good effort.  The race went better than planned in 2012 and I rolled in at 227 miles and 6th place overall.  (Three of those ahead of me were record breakers -- including John Nobile, who after last weekend holds course records at both the 12- and 24-hour distances for this event, as well as Damon.  The fifth was in the "had I kept my head down in the last two hours I might have beaten him" category.)  But I was coming off a completed Super Randonneur series, including personal best rides at the 400K and 600K distances, and probably 3000 miles under my belt in the first half of the year.  It was also a uniquely perfect weather year.


In contrast, this year I was coming off of knee surgery in March, which followed a heavy winter of no cycling, and precisely 0 randonneuring rides.  I had a long "ride" of 171.9 miles in the National 24-Hour Challenge on June 14 (does it count as a single ride if the mileage was broken up by three naps in the sun?)  (Picture here.)


(I'd include the ones above me, but the list is a tad long.)

What to expect on July 12, then?  Absolutely nothing!

The course is new as of 2013 -- John moved it into Saratoga Springs proper, from the original home in bustling Schuylerville, NY.  A few advantages of the move:  (1) Saratoga has more accommodation options, which helped largely because I doubt M__ would have enjoyed tenting in John's backyard; (2) the course was 40.5 miles instead of 32.5 miles, which makes for a natural (and in theory achievable) goal of 6 laps or 243 miles; and (3) course records were once again up for grabs.  (There were downsides, too, including two stoplights that created meaningful delays for anybody observing rules of the road.)

The 8 am start was warm and sunny, but not yet uncomfortable.  (Discomfort would come soon enough.)  One aww-shucks, which the below photo shows, is that the Saratoga 12/24 is drawing maybe 1/2 of its field from two years ago.

For reasons I do not know, understand, or care to dig into, the UMCA and RAAM are not including the Adirondack Ultra Cycling events in their calendars.  That leaves two of the storied ultra races (also the Adirondack 540) out of the mix for many big-time contenders.  (Query:  can't we all just get along?) 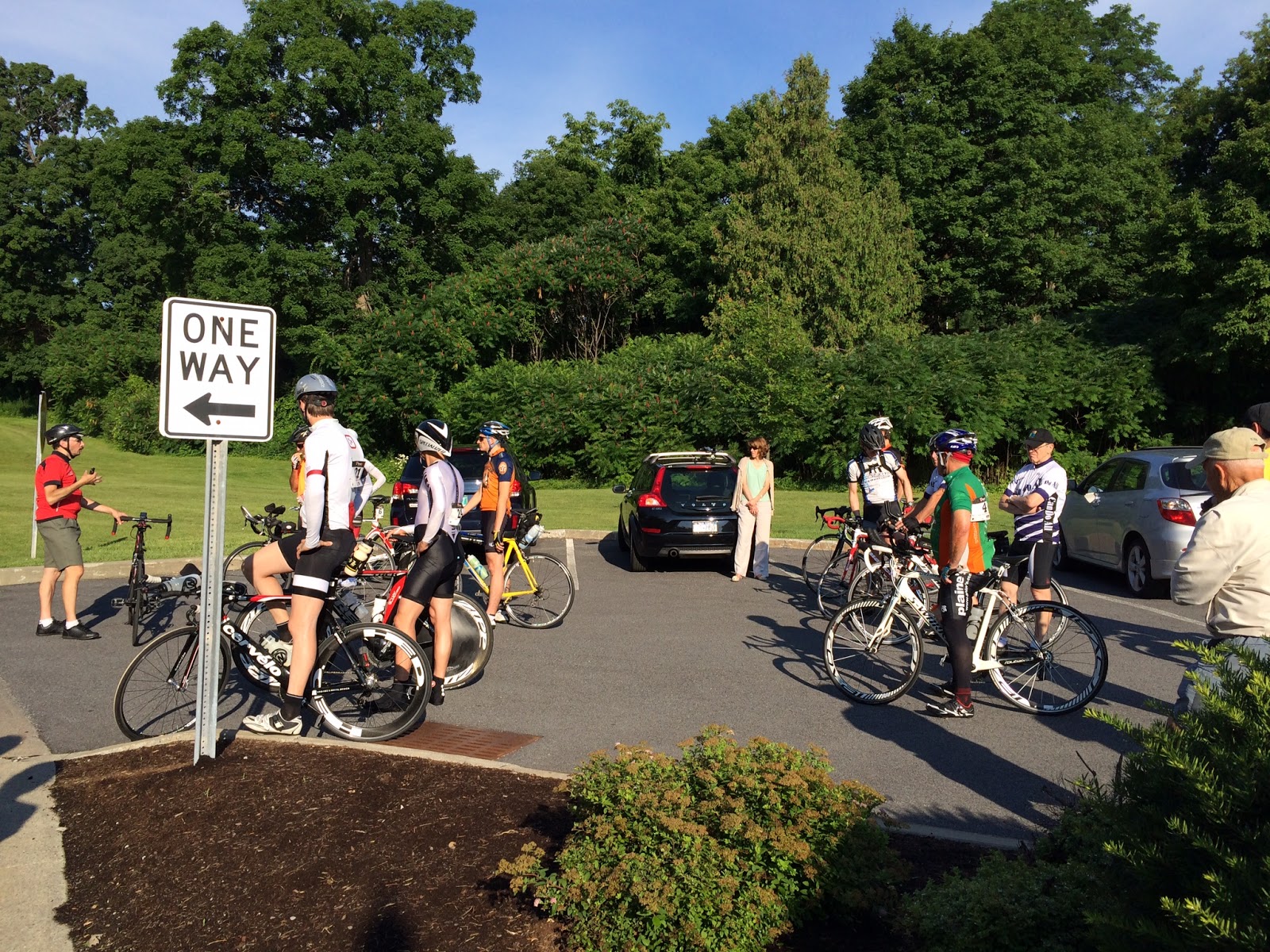 Having seen the success of riders like Damon and Matt Roy in 2012, I thought "why not ride the tri bike"?  Answer:  because it is uncomfortable.  (But you knew that, didn't you?) 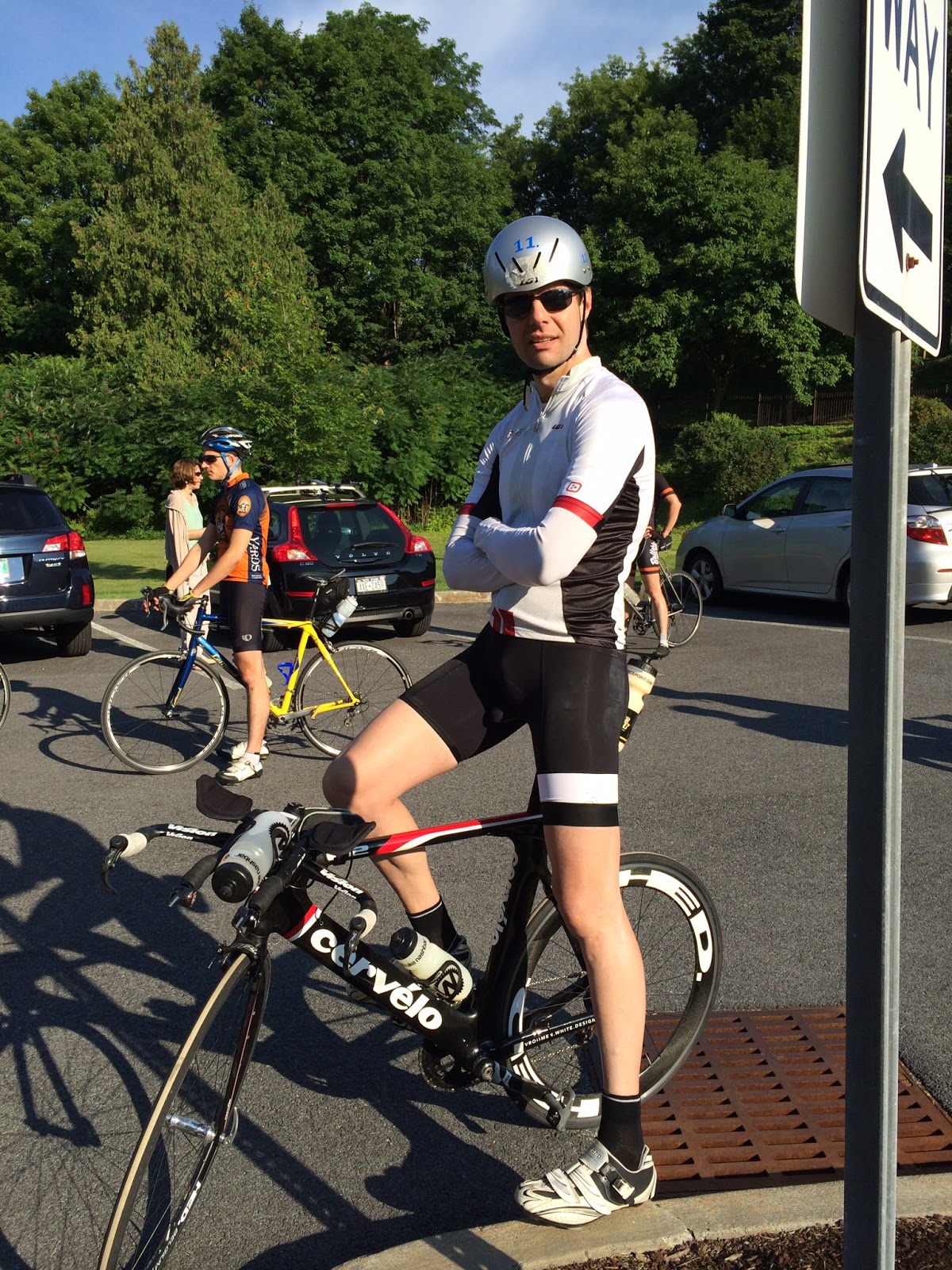 It was a hot day on a course with significant exposure.  According to Garmin, the temps reached 102.2F.  A better guesstimate might be 95, but either way it was unpleasantly warm and humid to boot.

Ride data here.  I am amused to see as the day wore on that my peak speeds stayed about the same -- not a surprise, I suppose, as they came while coasting downhill -- but the valleys got dramatically deeper.  Thus, for the first 60 miles and most of the first century, every five-mile average was above 20 mph.  Only once after that point did a five-mile average (barely) eclipse that number.  Then, amusingly, the final kilometer registered a wicked 23 mph, in a desperate sprint to earn the final mile.


Summary
Just after the start I blew a turn and found myself playing catch-up to John Nobile.  John was third to Matt Roy and Damon on the old course in 2012, set the new course record here in 2013 at 255 miles, won the Adirondack 540 last year, and this year had entered the 24-hour race.  He was plenty willing to chat with a piker at the lights, and we swapped leads for most of the first century.  (John continued to hold that pace through the day and most of the night, finishing with an astounding 468.5 total miles in 24 hours.)

It was early in that first lap that three-time RAAM finisher Rob Morlock passed me.  Thanks to the lengthy out-and-back portion of the loop, I saw Rob going the other way twice on every subsequent lap; considering that the guy rode 243 miles on a hot day, he nonetheless managed a cheery wave every time.

An aside about these ultra events:  the bigger races may not be this way -- I frankly don't know -- but in a smaller field like this year's 12/24, you really are mixed in with the a handful of elite athletes.  Nobile and Morlock may not analogize to Alexander and McCormick (of Ironman fame), but they are fair analogies to I-AA triathlon pros.  And while nobody will ever accuse me of racing in their class, neither do they turn up their nose when passing me -- or even when I occasionally pass them.

I was a piece of jerky by the end of lap 3 and considered quitting at the end of lap 4, but a nap under the cold stream from a hose revived me.  M__, Damon, and John Ceceri were quite encouraging, in a "you drove all the way here -- why not ride?" sort of way.

Others fared similarly or worse.  The remaining ridership was decidedly lean when I pedaled my fifth lap.  But one racer, a triathlete from Bel Air, Maryland, rolled through the turn while I lay in the shade slurping a Coca-Cola, deciding whether to get back on the bike.  With encouragement I gave chase, but not in time to catch him.

A sprint at the end got me to the 5-mile mark, just past 207.5 race miles total -- which rounds up to 208.5 (you always get the next fractional mile).  Our Maryland triathlete earned second place, and the age group course record, by finishing one mile ahead of me.

Nice ride, particularly given the weather. Am I correct in surmising that your first 100 miles was under 5 hours? Sounds like a pretty good recovery from surgery.

4:56 at the century. Slowed down fast from there, though!