A couple months I was doing some investigation into Ti hardtails, and came across a lightly used 2014 Lynskey 650 hardtail for about $2400. I was tempted by it, but kept on looking.

Well wouldn't you know it, the next day the price was dropped by a couple hundred bucks. Suddenly it became much harder to resist.

Lynskey claims the MT 650 has the oddly specific retail price of $4,273, but that's clearly optimistic as they're offering a 30% discount on all their bikes, bringing the real retail price down closer to $3000. Regardless, ~$2000 for a name-brand well-equipped Ti hardtail is a pretty great deal, in my opinion. It's used, but they're offering a full warranty.

The MT650 arrived mostly assembled in a bike box. Picking up a bike box is always a bit of a surprise, as they feel surprisingly light.

The bike was nicely padded, and arrived unscathed. Perhaps 10 minutes later I had a ridable bike. 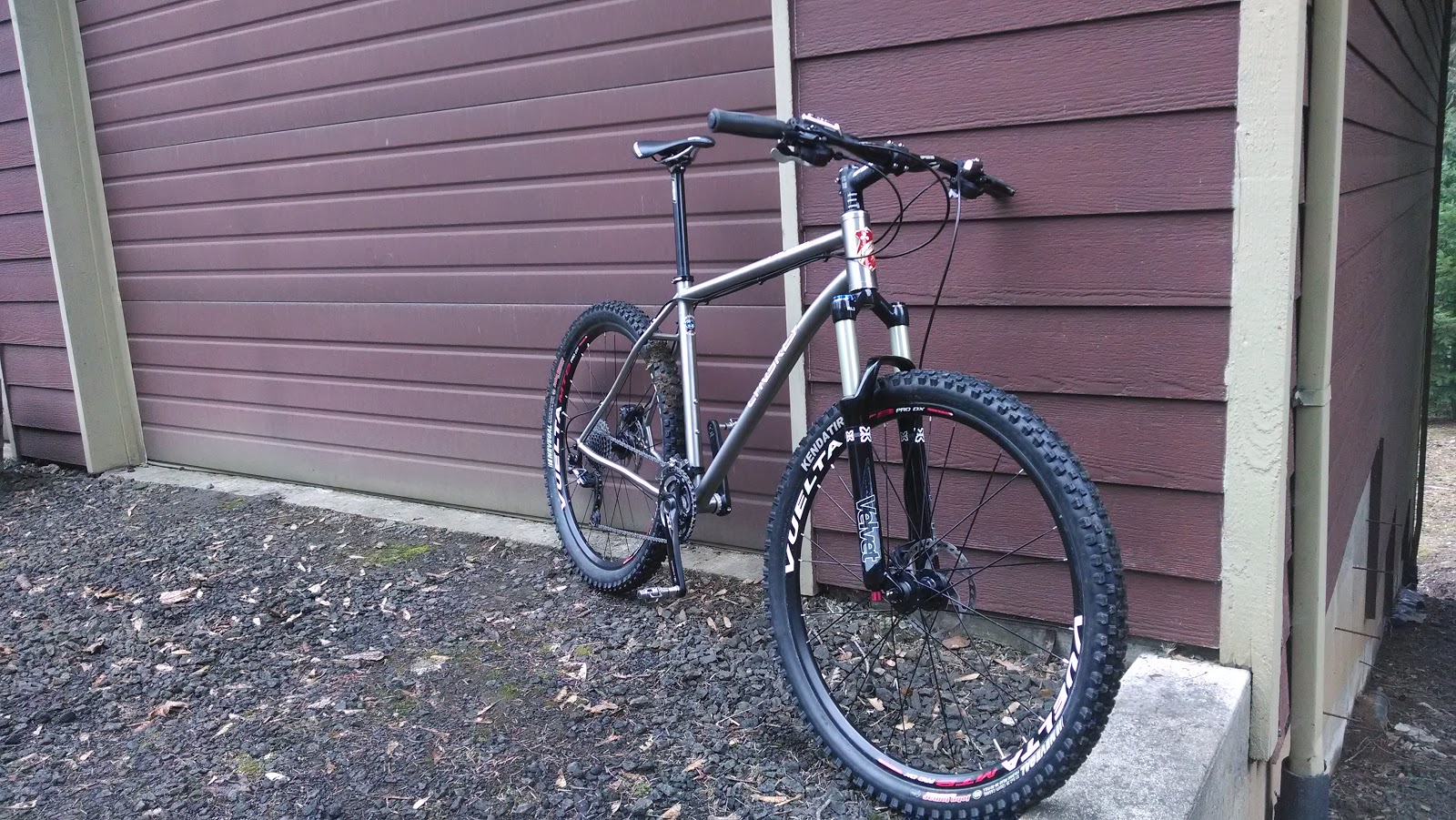 Of course once assembled, the most important thing is to weigh it. 25 pounds, 13 oz.
As luck would have it, this all happened right in time for snow to hit Oregon, and Max and me to hit Utah, and then me to hit BC.
So needless to say, the test ride would have to wait a bit.

First Thoughts
First, the size. I'm no giant; probably in the upper 5% of the size range, but definitely not a 1%-er. I'm squarely in the range that an XL anything, whether bike or shirt or pogo stick should fit me comfortably. Now, in Lynskey's defense, they do claim that the XL is sized for "5'11 - 6'2", but I'm just a wee bit taller than that, and the cockpit is definitely cramped. Look at the difference between my Trek Fuel and the Lynskey:
With the seat back and the bars forward, it works. But it's not as spacious as it should be. I'll probably end up swapping out a few items and maybe using a setback seatpost to solve the problem.

Second, and I'll admit that this is remarkably nit-picky, there a couple very minor build things that bug me. Sheldon Brown once commented that lining up the tube valve and tire label shows pride of workmanship. Much like Steve Jobs infamously cared about how the inside of the Macintosh looked. Lynskey got some things right here..
But also had a couple misses...
OK, like I said.. minor. The things that mattered work great. The gears shift smoothly. The brakes modulate perfectly. Unlike the usual "Shimano XT build" that consists of an XT rear derailleur and Truvativ crap everywhere else, this is a genuine 100% XT build.
Riding Impressions
With the caveat that I haven't yet had a long ride on this bike, my short ride was a blast. It's been a long time since I've ridden a hardtail, so I'd forgotten why everyone names their full suspension bikes "Bob". The X-Fusion Velvet RL2 has a lockout (pretty much everything does these days, after all). I didn't come close to bottoming it out on the dirt road leading to my house, but the action was smooth as, well. velvet.

I tried hard to discern a difference from the 650B wheels. But I couldn't. The bike is obviously very different than my Trek Fuel with 26" wheels, but I have had a hardtail 29er, and this rides much like that did.

The road near my house varies from nice dirt road to nice forest-service quality with pot-holes. Even a road-bike on 700x25s can handle the former fine, but the MT650 was comfortable and confidence-inspiring on the latter as well.

Not a surprise. I mean, that has a lot more to do with the tires and such than anything else. Once we get a dry day I'll take it out to the nearby single-track area for some more "testing".

Summary
There are a couple minor things I'll change. I've ordered a one-up 42T cog to get a true granny gear. I'm currently planning to put that on the Lynskey, but I may change my mind and put it on my Trek instead. I'll also likely throw on a set-back seatpost (or maybe even a dropper!) and a longer stem to make it fit a little better.

Overall I'm pleased. The bike feels like a well-balanced, quality build that will last a long time.
Posted by sam

What is the count? By which I mean "currently built and ridable bikes in your garage".

The Lynskey is sure pretty. Not as pretty as the snow in the middle picture, of course. Next time you need a picture of the Lynskey descending the snow.

Suffice to say, I have run out of ceiling hooks. I'm saving the 'descending in the snow' picture for the fatty.

#8 and #9 are supposed to be marked with a *soon*, but apparently blogger ate the tag.

Pretty bike! I'm stuck at 4.5 bikes: 2 road (rando and race), 2 tri (trainer and torture box), and a singlespeed commuter. If I had to change anything, it might be swapping the ti Seven road bike for a more randon-equipped model. I can obviously make it work just fine, but it's not really purpose-built.

Hah! Everytime I mount a tire now I make sure it is opposite of the rim marker. Oh, that Sheldon Brown. But yeah, the details do count fer sure!