Last weekend was what may have been the latest 200K I've ever completed, this one put on the DC Randonneurs starting and finishing from Poolesville, Maryland. 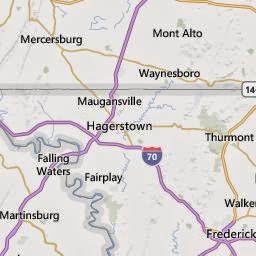 No, that's not really the map of the ride, but it's what comes up when I seek to save the image from Garmin Connect.  Waynesboro, Pennsylvania, is approximately the turn-around, and we did ride very near to Frederick and Thurmont, Maryland.  Data on the ride here.  (My unit cut out at about mile 112, so you have to imagine the final 13 miles.)

Damon, his friend M__ from Team Z (the Walmart of triathlon), I, K__ (who completed the Big Wild Ride last July), and two riders from the Bucks County Bicycle Club formed a loose group and rode most of the 200K more or less together.  We averaged a pedestrian 16 mph moving and weren't shy about long sit breaks at the controls.

This was a surprisingly challenging ride.  In part the temperatures were very high for October, topping out above 90 degrees and averaging over 80 for the ride.  In part the ride was objectively hilly, with better than 8000 feet of gain over the 200K.  In part the hills were subjectively challenging, with rollers that seemed to stack just the wrong way and climbs up the hard side of Mar-Lu ridge (Sam did this with me at a RUSA Anniversary 200K in August 2008) and Harp Hill, a moderately long climb that tips to around 15% at its worst.

In part it's been a while since I've ridden anything longer than 112 miles, and that 112 miles wasn't exactly easy -- i.e., 200K sounds easy after you've ridden five or ten of them, but it's always just about 15 miles longer than I want it to be.
Posted by Max