I picked up a new mountain bike (well used, but new to me) for a trip a couple weeks back (brief report forthcoming), but now I need to pay for it somehow. That means selling off some unused bikes. It's always sad to see nice bikes move on, but a bike unused is a bike abused, and I hate to be a bike abuser.

So this post is a bit of a memorial to some fine bikes. 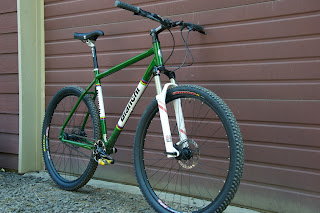 I bought this a few years back, on a lark really. It was about half off at a local shop, and something about a single-speed 29er appeals to me. I used it for commuting up in Kirkland, but the single-speed ratio never really worked for me on trails. For climbs the gearing was way too high, and for everything else it was too low. The hydraulic brakes and front lockout, though, were both superb. If I lived on a network of dirt roads, this is the bike I'd use. But I don't, and I don't. 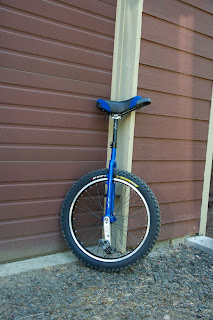 I really wish I were enough of a bad-ass to ride this. I mean, seriously... Just look at this:


Unfortunately I am most definitely not a bad-ass. And despite at least 10 minutes of trying, could not get the hang of the unicycle. So hopefully someone else will do a better job with it than I. 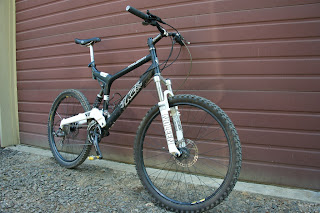 This was my first real mountain bike. I don't know how many rides I've done on it, but somewhere between "quite a few" and "a lot". I bought the frame on ebay, and built it up. First with surplus parts from a crappy Ironhorse from Performance, and then another rebuild with some nice new bits, including a bash-guard.

Despite being a mutant, I think it's better looking than 95% of the bikes out there. It rides pretty well too, but the rear swing-arm has always negatively impacted the shifting. And the fork could use overhauling, but I don't want to do it and the bike shop claims they don't have the bits for it. Anyway, if this bike sells, I'll be sad to see it go. If it doesn't sell, I'll part out the good pieces on ebay. 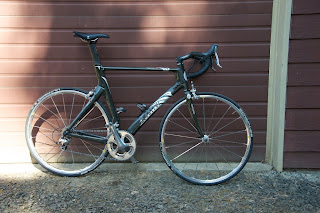 Ah, the Kestrel. I've had a lot of nice rides on this bike, and I think Max has too. The problem is simply that it is redundant. I've kept it around mostly as a spare for when Max is in town, but with the Cannondale back in service, that's no longer a legitimate reason to keep it. I enjoy riding it, but my Habanero is a perfectly fine substitute.

So I had to choose: The Kestrel, which probably has a finite lifespan, or my Habanero, which I've already got a decade or so on, and could see riding for another decade. The Habanero wins that contest easily.

Fortunately for the Cannondale it will inherit the Kestrel's Ksyrium ES and go-fast Vittoria tires.
Posted by sam

Funny that I'm in a sell-off too. Not quite at this level. Three wheelsets on Friday. Hopefully the Motobecane fixie today. And possibly the Neuvation carbon wheels, which means I need to figure out what wheels to put on the new Neuvation F100.

By the way, when you sold your last fixed gear, did you have problems with potential buyers who had no idea what they were getting into? Just had to chase away the second buyer who asked "how many gears"?

Three wheelsets; that's an impressive count. I realized when trying to pick the wheels to put on the Kestrel that I have few unclaimed 'matched' sets. Just a bunch of individual front or rear wheels.

My last fixie (the Steamroller) got exactly one response, and the guy knew exactly what he wanted. Apparently I priced it perfectly.

The motobecane is tougher. Nobody looking for a fixie searches craigslist for a motobecane, so it makes sense that you'll get some yahoos. My suggestion: stick one Andre the Giant stickers on the top-tube, and put it on a messenger mailing list.